What is the Difference between Church, Abbey, Chapel, Cathedral and Basilica? 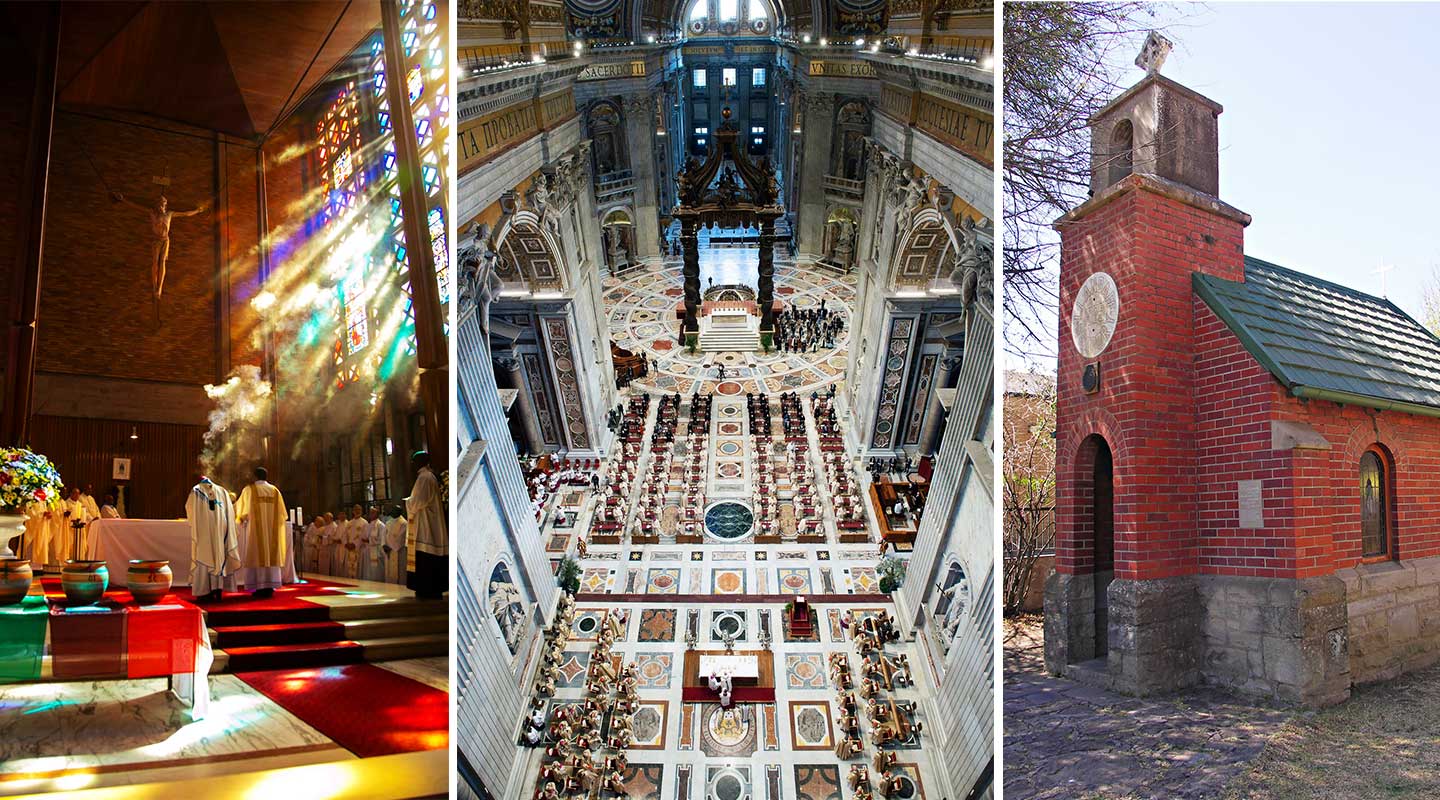 Question: We all know what a church is, but what is the difference between a church and a cathedral, basilica, abbey or chapel?

Answer by Günther Simmermacher: Let’s begin by briefly defining a Catholic church: a building that satisfies certain precepts in design intended for the celebration of the Mass and worship, and in the case of pilgrimage churches, the veneration of a saint. By canon law, all churches must be solemnly consecrated, or at least dedicated to God by a blessing, before they can act as places of divine services.

A cathedral is almost always the seat of a bishop in his diocese. The word derives from the Greek “cathedra”, which is the name of the presiding bishop’s seat (or throne).  If a church is only temporarily serving as a cathedral, or serves as the seat of a bishop in a territory that isn’t a diocese, it’s called a pro-cathedral. Some of those have served that temporary function for a long time, such as Dublin’s St Mary’s church, the city’s Catholic pro-cathedral for almost 200 years. The old pro-cathedral in Johannesburg’s Kerk Street served as the bishop’s seat until Christ the King cathedral was consecrated in 1960.

A cathedral can be a basilica, but a basilica doesn’t need to be a cathedral. The world’s most famous basilica, St Peter’s in the Vatican, isn’t a cathedral. But the pope’s cathedral, as the bishop of Rome, is also a basilica: St John Lateran.

The term “basilica” generally denotes a particular style of architecture which goes back to the design of public buildings in ancient Rome, usually with an apse at the end of a nave with two or more aisles. When Christianity was decriminalised in 313 AD, enabling it to move out of its private house churches, the faith’s new places of public worship were usually based on these Roman structures — the 4th-century historian Eusebius referred to all ecclesial structures as basilicas. But in the Catholic Church (as in the Orthodox Church), “basilica” also denotes a canonical title of honour bestowed by a pope to church buildings in recognition of their importance. In the Catholic Church, there are four major basilicas, all in Rome, and more than 1800 minor basilicas. 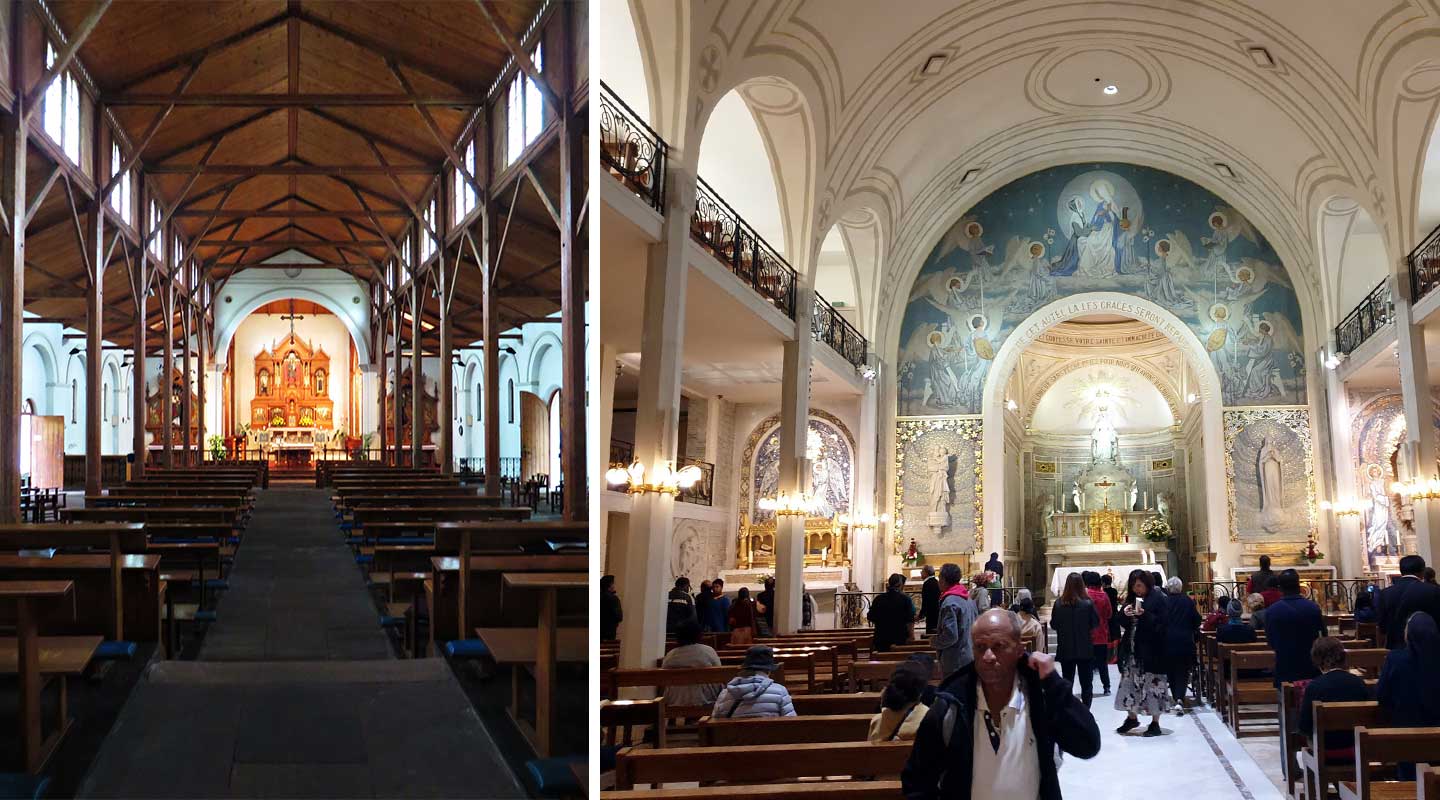 A chapel, in the sense of a freestanding consecrated building of prayer and/or liturgy, is usually a small structure which has no priest attached to it, or is a satellite to a parish. It may serve an institution, such as a convent or a Catholic school or a retreat house, or it can be attached to private property, such as a palace or a farm.

Chapels can be spectacular, such as the Sistine Chapel in the Vatican or Sainte-Chapelle in Paris. Or they can be tiny, such as the Catholic Llandaff Oratory in Van Reenen, KwaZulu-Natal, which seats only eight people. It was built by Maynard Mathews, who would become a Dominican priest, in memory of his son Llandaff who died while saving the lives of eight colleagues in a mine accident in 1925. Chapels can also be interdenominational, such as those in airports or hospitals.

Another term for small chapels, usually for private worship, is “oratory”. That term is also used for churches  of certain societies of priests, such as the Oratory of St Philip Neri, such as the famous Brompton oratory in London.

An abbey is usually a large monastery which combines religious activities and income-generating operations which guarantee their self-sufficiency, as well as social institutions, such as a school. Often the churches of such monasteries are called abbeys, though more commonly in Protestant contexts. The more accurate term for houses of worship in abbeys and monasteries is “conventual church”.