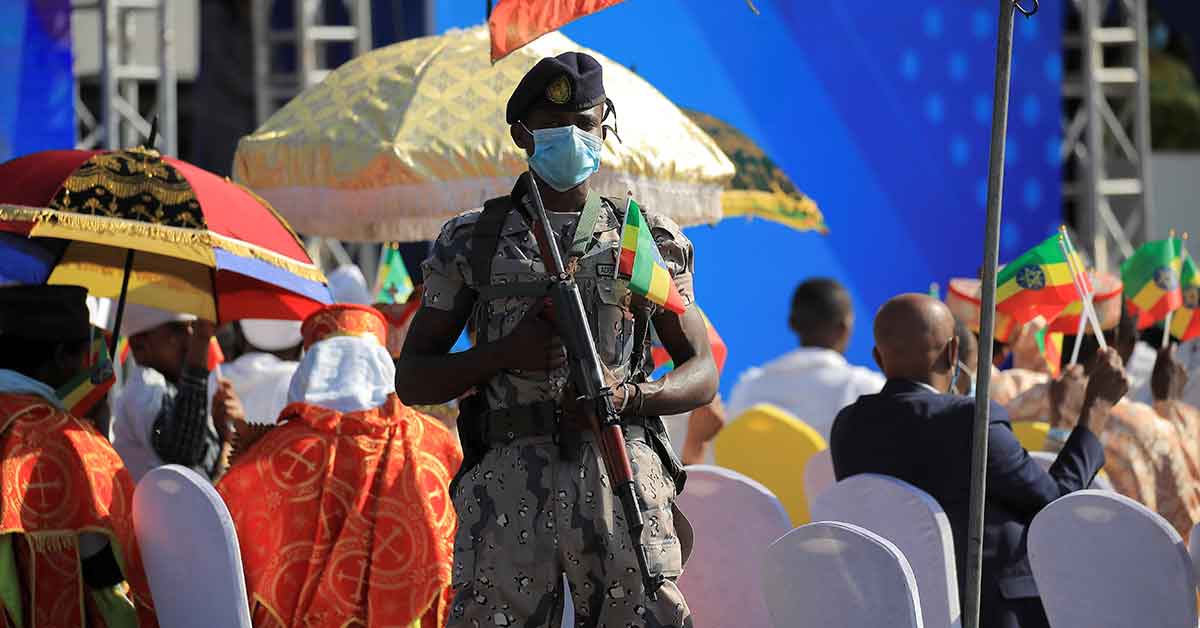 An Ethiopian police officer stands guard during a pro-government rally in Addis Ababa on Nov. 7, 2021. People were denouncing what rally organisers say is interference by the Tigray People’s Liberation Front and Western countries in the internal affairs of the country. (CNS photo/Tiksa Negeri, Reuters)

By Fredrick Nzwili – Ethiopian government forces raided a centre run by the Salesians of Don Bosco in Addis Ababa on November 5 and arrested 17 people, including priests, religious brothers and employees. Most were from the Ethiopian region of Tigray and were taken to an unidentified destination.

“All of them are still in prison. They are still being kept in an unknown prison. The provincial superior is among them,” said a source who could not be named for safety reasons. “We continue to pray for peace. The situation is very delicate.”

One Twitter post said the priests and others were accused of sending money to Tigray. Relief aid to the region has been blocked, and people are said to be starving.

The most recent conflict began in November 2020 when Ethiopian Prime Minister Abiy Ahmed Ali, a Nobel Peace Prize laureate, launched an attack on the administration of the semi-autonomous region. He accused the regional administration of attacking a national army base in the Tigray capital, Mekele. Since then, thousands have died and more than 1 million people have been displaced as the conflict spread to other regions of the country.

Rebels of the Tigray Defense Forces have signed an agreement with another eight groups and are advancing on the capital. The prime minister declared a six-month state of emergency and urged residents of Addis Ababa to arm themselves to protect neighbourhoods.

The Salesians, who began working in Ethiopia in 1975, have an established presence in Tigray. The order’s website says 100 members of the order live in about 14 houses spread across Ethiopia, where they run schools and vocational training centresTigray and homes for street children.