Pope: The Worst Poverty is Lack of Faith 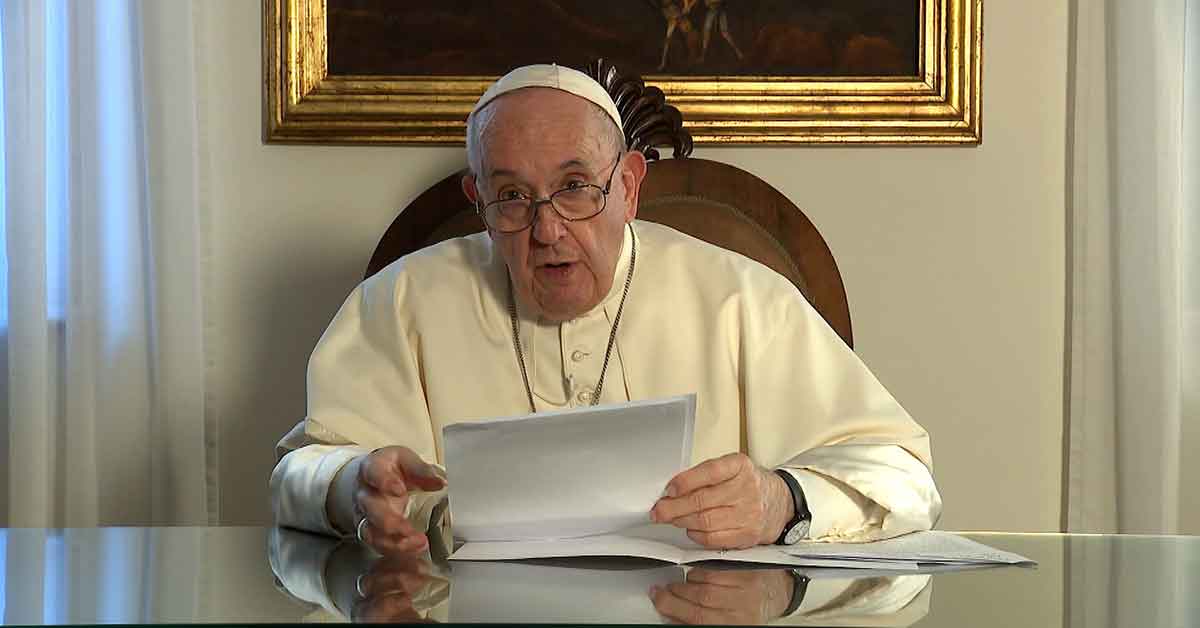 Pope Francis speaks in  a video message to participants in the Festival of Social Doctrine of the Church, an event held in Verona, Italy. In the message, the pope said “boldness, hope, creativity and courage are words that outline the spirituality of the Christian.” (CNS photo/Vatican Media)

By Carol Glatz – There is no greater poverty than a life without faith in God, Pope Francis said in a recent message.

The world needs hope, people’s talents and Gospel values, he said in a series of messages to Catholic organisations in late November.

In a letter sent to mark the 30th anniversary of the international forum Catholic Action, the pope encouraged members to continue to seek out and discover where people and their lives are heading, “without prejudice, without fear, without categorising and without feeling that we are the regulators of anyone’s faith.”

“I invite you to be there, where your interests, your concerns, your deepest wounds and your greatest anxieties go,” he said in the written message.

“We know that there is no greater poverty than not having God, that is, living without faith that gives meaning to life, without hope that gives us strength to work, without feeling loved by someone who does not disappoint,” the pope wrote. “This is the place where and the people with whom Catholic Action must fulfil its mission.”

The group held an event online Nov. 26-27 celebrating the 30th anniversary of the forums, which were established to allow for greater openness and encounter of Catholic Action groups at a universal level.

He asked the members to be deeply aware of the urgency of working to foster fraternity and friendship “as means of rebuilding a wounded world” and to help people understand that “authentic Christian spirituality is that which is founded in the desire for holiness,” which is a path that begins with the beatitudes and is realized “by loving and working for brothers and sisters who are suffering the most.”

For Catholic Action, and the church itself, “there have been, there are and there will be lights and shadows, moments of profound disorientation, of fatigue, of indifference, of fear of having been surpassed by the demands of the new times,” he wrote.

They must avoid the “great temptation in moments of crisis or difficulty” of shutting oneself away from the world to treasure the little that one has, “waiting, hidden and cherishing memories, for better times to come,” as reflected in the parable of the talents, he wrote.

The pope reiterated the importance of this parable in a video message he sent Nov. 25 to people taking part in the Festival of the Social Doctrine of the Church, being held in Verona Nov. 25-28.

This parable told in the Gospel of Matthew (25:14-30), he said, seems to be about “the boldness that is necessary to be a Christian.”

“Against all do-goodism and fatalism, Jesus invites the crowds to use their talents with courage” and “to take risks and invest them in order to multiply them,” he said. “When we remain closed in on ourselves with the sole objective of preserving what exists, we are losers in the eyes of the Gospel, in fact, even what is left will be taken away.”

“Boldness, hope, creativity and courage are words that outline the spirituality of the Christian,” he said, inviting everyone to “walk in the hope that is bold, can look beyond personal convenience, the petty securities and compensations which limit our horizon, and can open us up to grand ideals which make life more beautiful and worthwhile.”

Boldness is what will inspire new action, guide skills, stimulate commitment and give life, he said, asking that “Wherever you are, build change!” so that the world can emerge from the current crisis of the pandemic better, not worse.

The global pandemic, in fact, made people aware more quickly “that our lifestyles must change,” the pope said in a message written and signed on behalf of the pope by Cardinal Pietro Parolin, Vatican secretary of state.

“It is urgent to think of a future that invites, that makes hope come alive” because “it is this beautiful virtue of hope that we Christians can offer to the world in these times of crisis,” said the message sent Nov. 26 to those taking part in the 90th meeting of “Semaines Sociales de France.” The annual “Social Weeks” event, sponsored by the Catholic Church in France, was being held in Versailles Nov. 26-28.

“The Holy Father asks the Lord to open your hearts, enlighten your minds and inspire your exchanges, so that they may formulate the paths of hope that the world so badly needs,” the cardinal wrote.

The pope hoped that their work would support, defend and promote creation, the most vulnerable people and the integral development of each person, including their spiritual dimension, he added.

Tags: Social Doctrine of the Church