Many women fear their voices will be ignored in synod 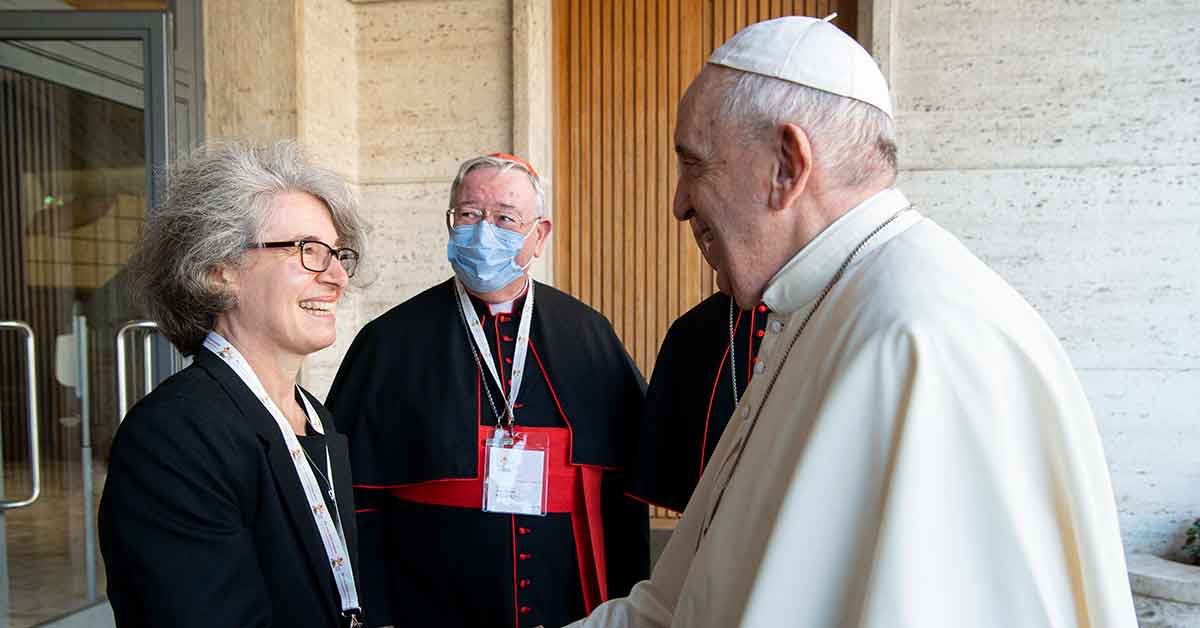 Pope Francis greets Sister Nathalie Becquart, undersecretary of the Synod of Bishops, during a meeting with representatives of bishops’ conferences from around the world at the Vatican. Sister Becquart said Catholic women need to encourage and support one another for the realisation of a church that is “truly inclusive.” (CNS photo/Paul Haring)

By Cindy Wooden – Women around the world are participating in the process of the Synod of Bishops, but many of them fear that, despite promises, their voices will not be heard, said speakers at a webinar in Rome.

“We have to deal with the fears,” Xavière Missionary Sister Nathalie Becquart, undersecretary of the Synod of Bishops, said Dec. 16 during the conference on “Women in Synodality” sponsored by the Australian Embassy to the Holy See, Georgetown University and Civiltà Cattolica, a Jesuit journal.

The synod process, which aims to promote what Pope Francis calls a “synodal church” – one where all the baptised listen to each other, participate and share responsibility for its unity and mission – is calling for change, and change can bring fear, Sister Becquart said.

Since the current process will conclude with the assembly in 2023 of the world Synod of Bishops – a gathering where men are the majority – “I fear women won’t be heard again after all,” wrote one participant on the webinar’s chat channel. Dozens of others made similar comments.

Catholic women, Sister Becquart said, need to encourage and support one another for the realisation of “the church we dream about,” one that is “truly inclusive,” that values the gifts of all the baptised, promotes collaboration and listens to the Holy Spirit.

Immaculate Conception Sister Anne Béatrice Faye, a Senegalese theologian teaching in Burkina Faso, told the group, “A church that seeks to live a synodal style cannot fail to reflect on the condition and role of women in its midst and, consequently, in society in general.”

Leadership in a synodal church must be “servant leadership” shared by women and men, she said. For that to happen, “it is necessary to remove the canonical obstacles that block the access of laypeople, and therefore women, to positions of responsibility that do not require ordination.”

Susan Pascoe, chair of Catholic Emergency Relief Australia and a member of the synod commission on methodology, noted how in his 2018 letter “to the people of God” about the sexual abuse crisis, Pope Francis wrote, “Every one of the baptised should feel involved in the ecclesial and social change that we so greatly need.”

In response to the “fear of clerical dominance” voiced by many of the webinar’s viewers, Pascoe said the pope has issued an “authorisation” for participation by “all the people of God: women, men, everybody, those who feel they’ve been excluded.”

In preparing for the synod, she said, Pope Francis is telling all Catholics: “Be as creative as you want. Make your voice heard.”

The process, as launched by the pope, Sister Becquart said, is one of “deep listening, mutual listening.”

What is heard in parishes and dioceses will be synthesized and passed to the national bishops’ conferences where a national report will be prepared for the general secretariat of the synod, she said.

But the results cannot be predetermined, she said. “It would not be very synodal if we said, ‘This topic will be addressed like this and this one like this.'”

At each level of the church, she said, the synthesis must be done by a team, including the bishop, but not only. “If it is a woman alone or a bishop alone, you’re missing something.”

Myriam Wijlens, a canon lawyer and consultant to the synod secretariat, said a fundamental theological question involved in the synod regards the input of the bishops who will gather for the assembly.

“Theologically, the idea was always that the bishop would be a witness of the faith of his own church, so he does not speak about his own faith” at the synod, she said. At the same time, he witnesses to the faith of the church throughout the ages and not just to contemporary concerns.

The bishops, she said, should present “an honest report; it should not present their personal views. And an honest report, with the language of ‘Gaudium et Spes,’ expresses the hopes and the joys but also the challenges that the people are facing. So, I do hope that the bishops feel encouraged and brave to present and say this is what the people in my church believe and what they want to share with the rest of the community.”

Loreto Sister Patricia Murray, executive secretary of the International Union of Superiors General and a member of the synod’s spirituality commission, said if the synod process begins with listening to those who have been hurt or pushed aside, it will teach the whole church how to listen.

“The whole question of encounter and listening really has to start with listening to the hurt, to the abuses that have been felt, experienced at a personal level within the church and by the church,” she said. “If we don’t listen to the pain that has been suffered, we won’t see where we both individually and communally are called to change, called to conversion.”

“The art of encounter and of listening with compassion and tenderness is something where we have to suspend judgment and enter into the pain that the other person has felt and experienced,” Sister Murray said. “I think the Spirit guides us as we explore the way forward, as we acknowledge our faults, our failures, our sin as we see where we’re called to healing and wholeness. I think if we fail to do that, the synodal journey will be seen to be incomplete.”