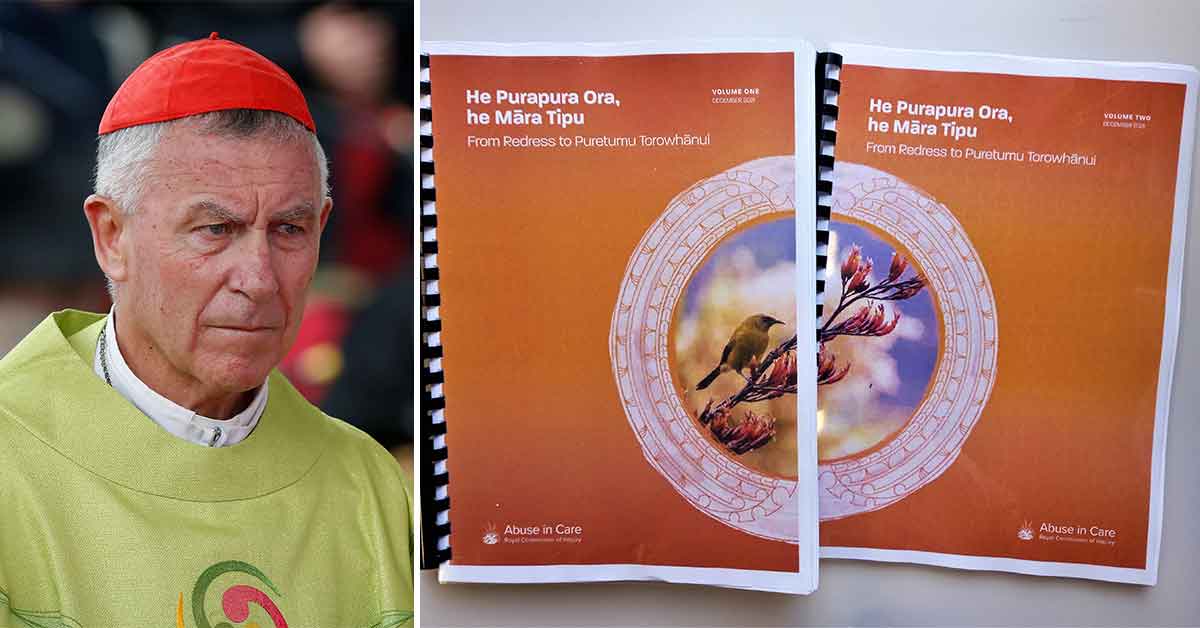 (Left) Cardinal John Dew of Wellington, New Zealand, is pictured in a 2018 photo.(CNS photo/Paul Haring) (Right) Cardinal Dew and other New Zealand bishops and religious order leaders are welcoming an interim redress report of the Royal Commission into Abuse in Care and say they will look at how they can implement the recommendations. (CNS illustration/David McLoughlin, New Zealand Catholic Bishops Conference)

By CNS – Bishops and religious order leaders welcomed an interim redress report of the Royal Commission of Inquiry into Abuse in Care and said they will look at how they can implement the recommendations. They already have begun working on a plan.

The report, “He Purapura Ora, he Mara Tipu; from Redress to Puretumu,” was introduced in Parliament Dec. 15 and makes recommendations on how survivors of abuse in state-run and faith-based institutional care should be heard and get compensated for the harm suffered. Volume 1 of what was submitted took churches and the New Zealand government to task for ignoring and stonewalling survivors claims.

“Despite harrowing accounts and often obvious signs of physical, emotional or psychological damage, many survivors found their efforts to obtain redress from state and faith-based institutions rejected time and again. For many survivors, their experiences were downplayed, disbelieved or dismissed. Their claims sat in in-trays for months or years. They struggled to get their personal records, and when they did, some were so heavily redacted they could barely make sense of them. A determined few continued their struggle in the courts, only to run into legal brick walls, the most overwhelming being accident compensation legislation and limitation defences,” said just one area of the report.

It also recommended an independent redress plan, with a holistic approach based in Maori and Pacific Islander culture, to help survivors and their families.

Volume 2 of what was submitted to Parliament was case studies.

Cardinal John Dew, president of the New Zealand Catholic Bishops Conference, said: “We have been listening closely to what survivors have been telling the royal commission. We have previously indicated our support for the establishment of an independent redress scheme. This report gives a series of recommendations we can study to help us as we walk alongside survivors of abuse.”

Sister Margaret Anne Mills, a member of the Sisters of Compassion and president of the Congregational Leaders Conference, acknowledged harm done to survivors of abuse and welcomed the proposed recommendations.

“We see the report as part of the vision to transform what we are doing today and into the future,” she said.

In July 2019, the religious leaders and the bishops formed a support group, Te Ropu Tautoko, to coordinate and manage cooperation between the commission and the Catholic Church in New Zealand.

Catherine Fyfe, chair of the group, thanked the royal inquiry commissioners for their work in preparing the two-volume report and said Te Ropu Tautoko members “look forward to helping church leaders along the journey of reviewing and implementing the recommendations.”

During the inquiry, Te Ropu Tautoko created a roadmap of work that needs doing across all areas of the church to make improvements in response to reports or disclosures of abuse in the care of the Catholic Church.