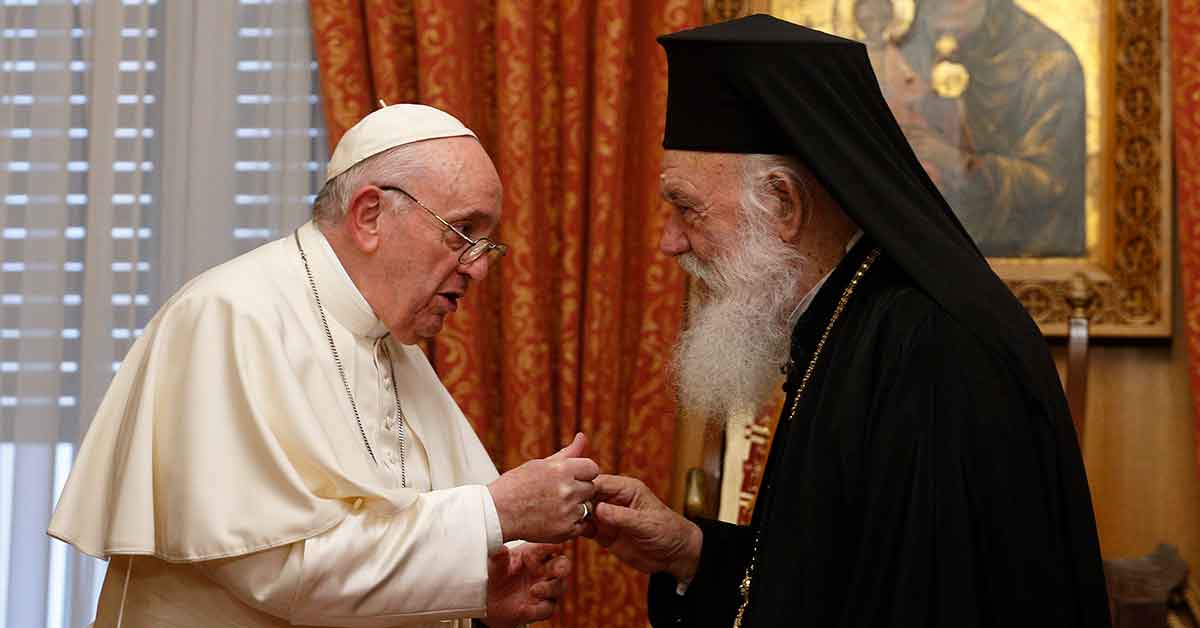 Pope Francis talks with Orthodox Archbishop Ieronymos II of Athens and all Greece during a meeting with their delegations in the Throne Room of the archbishopric in Athens, Greece, Dec. 4, 2021. (CNS photo/Paul Haring)

By Cindy Wooden  – Like St John Paul II before him, Pope Francis apologised to members of the Orthodox Church of Greece for the ways Catholics over the centuries had offended them, and he told Catholic leaders that they must embrace their minority status with humility.

“Here, today, I feel the need to ask anew for the forgiveness of God and of our brothers and sisters for the mistakes committed by many Catholics,” Pope Francis told Orthodox Archbishop Ieronymos II of Athens and all Greece.

Under heavy grey skies, Pope Francis made his way Dec. 4 from the Vatican nunciature to the archbishop’s office in Athens’ old city. He was driven to the nearby Catholic Cathedral Basilica of St Dionysius the Areopagite only after his meeting with Archbishop Ieronymos, the spiritual leader of the majority of Greek Christians.

While Catholics and Orthodox have the same roots in the preaching of St Paul and the teaching of the early church theologians and first ecumenical councils, “tragically, in later times we grew apart,” the pope said.

“Worldly concerns poisoned us, weeds of suspicion increased our distance and we ceased to nurture communion,” Pope Francis said. “Shamefully – I acknowledge this for the Catholic Church – actions and decisions that had little or nothing to do with Jesus and the Gospel – but were instead marked by a thirst for advantage and power – gravely weakened our communion.”

Pope Francis acknowledged there are some Christians who are not thrilled about ecumenism and its efforts to pray and work for the restoration of Christian unity and, in fact, as the pope arrived at the archbishop’s residence, an elderly Orthodox priest repeatedly shouted, “Pope, you’re a heretic.”

But convinced that communion is the path willed by Jesus who prayed his followers would be one, the pope told the Orthodox archbishop: “Let us fearlessly help one another to worship God and to serve our neighbour, without proselytism and in full respect for the freedom of others.”

To those who would object that evangelisation is more central to the church’s mission than ecumenism is, the pope replied, “How can we testify before the world to the harmony of the Gospel, if we Christians remain separated? How can we proclaim the love of Christ who gathers the nations, if we ourselves are not united?”

And while the Catholic-Orthodox theological dialogue continues to discuss differences between the churches, their faithful have much they can and must do together, the pope said.

“Even now,” he said, “the Spirit urges us to care for the weak and poor and to bring their cause, paramount in the eyes of God, to the world’s attention.”

Archbishop Ieronymos, who is three months younger than Pope Francis, told him that at this stage – the pope will be 85 December 17 – they basically have lived their lives and “enjoyed the beauties of God in nature and the environment. But what does the future hold in store for the younger generations?”

The COP26 conference on climate change was a big disappointment, the archbishop said, and he asked Pope Francis to join him in condemning the compromises made in Glasgow that failed to make a real difference to reduce carbon emissions.

Recalling how they visited the Greek island of Lesbos together in 2016, the archbishop told the pope, “It is such a relief to see your great sensitivity to the refugee and migrant issue.”

Praising Greek citizens who have come to the aid of refugees and thanking the pope for helping transfer migrants from Greece to Italy, Archbishop Ieronymos said it is time “to sound the alarm” and work “to stop the migration flow,” which, he said, is exploited by some countries and makes life difficult for the migrants, especially if they move to a country where there are few other people of their race or religion.

Going from the archbishop’s residence to the Catholic cathedral nearby, Pope Francis urged Catholics in Greece to be humble, patient, holy and helpful as they lived their faith as a tiny minority in the country.

“Being a small church makes us an eloquent sign of the Gospel, of the God proclaimed by Jesus who chooses the poor and the lowly, who changes history by the simple acts of ordinary people,” the pope told them.

“As church, we are not called to have the spirit of conquest and victory, impressive numbers or worldly grandeur. All this is dangerous. It can tempt us to triumphalism,” the pope told them. Instead, “we are asked to take our inspiration from the mustard seed, which appears insignificant, but grows slowly and quietly.”