Santa Claus dominates the public image of Christmas, but he was based on a great Christian. GÜNTHER SIMMERMACHER looks at the history of St Nicholas of Myra, and how the saint from modern-day Turkey morphed into the corpulent bringer of gifts from the North Pole.

The figure of Santa Claus is much a creation of American marketing expertise, entering popular culture in the 19thcentury and propelled to superstardom with Coca-Cola popularising the image of the jolly, portly, luxuriously-bearded, white-haired, red-dressed, reindeer-driving, elf-dominating, chimney-sliding, ho-ho-hoing deliverer of Christmas gifts. 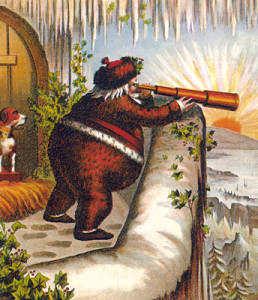 The popular image of Santa Claus was devised by US artist Thomas Nast in 1869.

Santa Claus, as most people will know, is based on the fourth-century saint Nicholas of Bari. St Nicholas, too, has always been depicted in ancient iconography with a full beard, though of a slimmer physique than the creation we encounter in shopping malls and on greeting cards.

An image created in 2005 by the British facial anthropologist Caroline Wilkinson, based on data collected after the saint’s skull and bones were temporarily removed from their crypt in 1953, reveals a man with strong facial features, especially the chin, and a dominant forehead. He was of medium height, at 1,67m. From the state of his teeth, we even know that St Nicholas’ diet was mainly vegetarian.

St Nicholas was born in around 270AD – some sources say on March 15 – to wealthy parents in Patara, on the Mediterranean coast in what is now southern Turkey. His parents, often named as Epiphanius and Johanna, died when he was young in some kind of epidemic, leaving the boy with a rich inheritance, which he would disperse in acts of charity.

The young Nicholas was taken care of by his namesake uncle, the bishop of nearby Myra, who trained his wealthy young charge for the clerical life, and eventually ordained him to the priesthood. 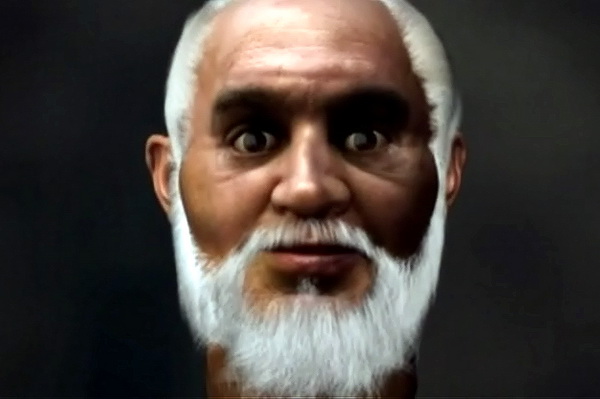 The reconstruction of St Nicholas’ face, based on his skull.

That was before the Roman Emperor Constantine legalised Christianity in 313 and protected the faithful from harassment, such as the Diocletian persecution of 303, the final and most severe pogrom against Christians in the Roman empire, which was at its most terrible in the East, where Nicholas lived.

At some point Nicholas succeeded his uncle as bishop. We know that he was present at the First Council of Nicaea in 325 – making him a signatory to the Nicene Creed which we still recite today. But Nicholas is not remembered as a mover and shaker of the Church in its nascent rise to power, but for his acts of charity.

One story stands out. Nicholas had learnt about the problem of a local man who had no funds to provide a dowry for his daughters. Unable to marry them off, the only future the father saw for his girls was a life of prostitution (those, clearly, were different days). In the still of the night Nicholas came to the house and anonymously dropped a bag containing gold coins through the window. The next night he did the same with a second bag.

The astonished father of the girls obviously was keen to know the identity of the anonymous benefactor, who either was too modest to make known his act of charity or wished to spare the family embarrassment. The father evidently cared little about either possibility, for on the third night he waited undercover for the sponsor’s return.

The identity of the benefactor now known, word of this merciful act of generosity spread and became entrenched in the story of Bishop Nicholas of Myra.

Other stories accompanied the legend of Nicholas. Some, such as his aid to sailors, ring true; others less so, such as the raising from the dead of three children who were pickled in vats by an evil butcher. 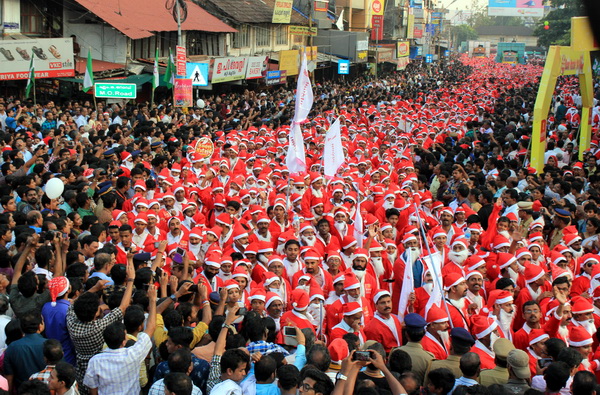 Santa Clauses parade through the streets of Thrissur, India, Dec. 27. The Archdiocese of Thrissur created a new Guinness World Record when they assembled 18,112 Santa Clauses on the streets and broke the existing record set by Londonerry, Northern Ireland, with 13,000. (CNS photo/Anto Akkara)

No doubt Nicholas was a holy man, as the cult that emerged soon after his death would confirm. But he was probably also a man of temperament. One story has him slapping the heretic Arius at the Council of Nicaea, which even then was not a conventional method of settling theological disputes.

Caroline Wilkinson, the facial anthropologist, also reported that Nicholas’ skull showed evidence that his nose had been broken at least once. Maybe the saint had his share of scrapes; more likely he suffered a brutal assault during the Diocletian persecution. The state of his bones suggested that he also had lived for some time in damp and unhealthy conditions, such as a jail.

Soon after Nicholas died on December 6, 343, in Myra, the locals built a new church in which to inter his remains. Myra, now known as Demre, soon became a popular place of pilgrimage, sustained by reports of many miracles attributed to the saint’s intercession. The veneration became internationally famous owing to what is called manna, aromatic water that forms around the bones of the saint, reportedly even today.

By the 11th century, trade in relics had become big business. Towns that had the relics of famous saints not only enjoyed the spiritual benefits of venerating their patron saint, but also the economic advantage of attracting pilgrim tourism. Most Italian towns of note could boast the bones of some saint or other.

The Adriatic town of Bari, however, had no relics, and therefore no pilgrims. That disappointing state of affairs would be relieved by the conquest of the territory around Myra by the Seljuk Turks in 1071. 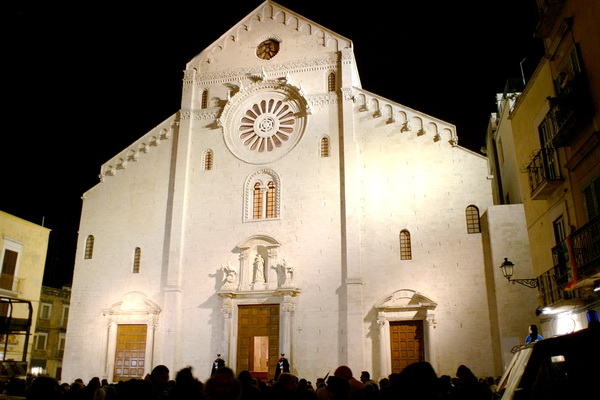 Church of San Sabino in Bari

Although control of the region had changed periodically over the following years, the Church in the West was concerned about pilgrim access to holy shrines. Bari and Venice announced their intention to bring the remains of St Nicholas to Italy, ostensibly for safe-keeping but with a keen eye on commercial opportunities.

The issue was not settled yet when in 1087 a crew of 62 sailors set off from Bari for Myra. When they entered the town’s cathedral, their leader, Matteo, smashed the tomb of St Nicholas, robbed the grave of much of its bones and took them to Bari, where they have been ever since. The names of the sailors were engraved into the cathedral, though that was of little consolation to them since the local church had reneged on a deal whereby the grave robbers were to be given a cut of the profits generated by the relics they had stolen.

The Venetians later collected what their counterparts from Bari had left behind. Modern forensics have confirmed that the bones in Bari and Venice come from the same person. Relics said to be those of St Nicholas in the Antalya Museum in Turkey cannot belong to the saint.
With the miracle of the manna continuing in Bari, the cult of St Nicholas spread throughout the West, to the point that St Nicholas became one of the most popular saints in the Church, with his feast day, December 6, widely celebrated.

In the 12th century, French nuns instituted a tradition of putting apples and nuts into the stockings of sleeping children on the eve of St Nicholas’ feast. It caught on throughout Europe; even today children in many parts of Europe receive little gifts in stockings or boots they put out before going to sleep on December 5. When they rise in the morning, they find their stockings or boots filled with favours by St Nicholas.

In the Netherlands, the feast of St Nicholas, rather than Christmas, remains the primary date for giving gifts.

In many parts of Europe after the Reformation, the veneration of the saints was suppressed, with varying degrees of success. That of St Nicholas was an obvious target.

In Puritan England, the tradition of presenting gifts was informally transferred to the feast of the Nativity, with a new character taking St Nicholas’ place: Father Christmas. Not coincidentally, in artistic representations Father Christmas looked much like those of St Nicholas.

In America, meanwhile, German and later Dutch settlers popularised the traditions associated with the saint they respectively knew as Sankt Nikolaus and Sinterklaas, with the Dutch in New York by the 18th century associating the saint with Christmas Day, rather than with December 6.

In America, as in Europe, Christmas was not yet a holiday, nor the family feast we know now, but above all it was a time for drunken raucousness, a state that persisted until the mid-19th century.

By the early 1800s, the traditions of St Nicholas in the United States had mingled with those of the English Father Christmas (and a bit of the Germanic pagan god Odin thrown in for good measure). The composite figure became entrenched with Christmas, with the Dutch name Sinterklaas gradually being corrupted to become Santa Claus.

The pivotal point in the elimination of the saint was the early 1820s. In 1821, America’s first lithographed book, The Children’s Friend, told of “Sante Claus” travelling from the north in a sleigh powered by flying reindeer. 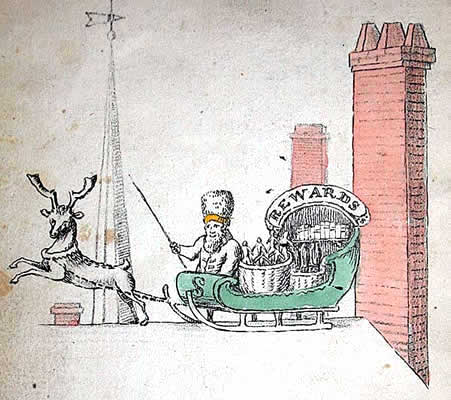 Santa Claus, depicted in The Children’s Friend in 1821

Two years later, the famous poem “The Night Before Christmas” appeared. It was originally titled “A Visit from St Nicholas”, but its description of the eponymous character had little to do with the saint, but instead established the template for the now familiar corpulent, jolly fellow who makes his visits on December 25, not on the sixth day of the month. That template was entrenched with the drawings of Santa by the US artist Thomas Nast in 1869 (see image on top of the page).

With that, the fourth-century saint with a charism of charity and love of God was displaced by a figure of fiction that would become synonymous with commercial exploitation.

But God has the last laugh: Santa Claus played a crucial part in turning Christmas from an occasion for drunken revelry into the family feast we know and value today. One suspects that St Nicholas would approve at least of that.