Pope Francis will bring Migrants from Cyprus to Italy before Christmas 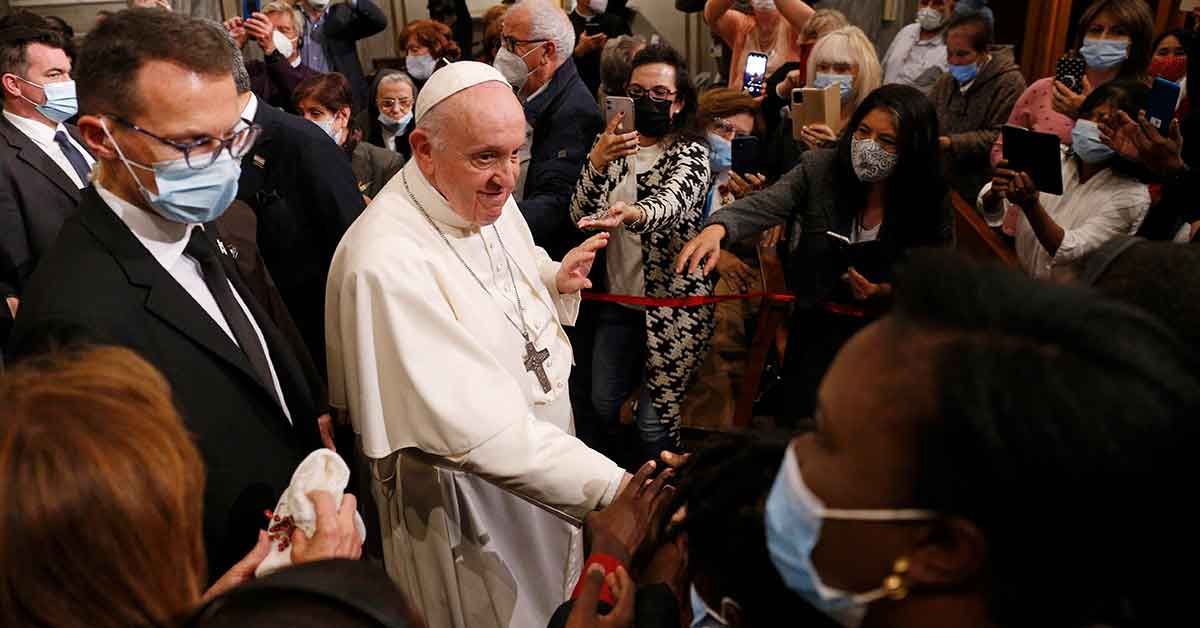 Pope Francis greets people as he leaves an ecumenical prayer with migrants in the Church of the Holy Cross in Nicosia, Cyprus, Dec. 3, 2021. (CNS photo/Paul Haring)

By Cindy Wooden – After Pope Francis denounced putting up “barbed wire” to keep out migrants and the practice of pushing boats back to countries where they face conditions similar to a “lager,” the Vatican announced he would help move a dozen migrants from Cyprus to Italy before Christmas.

“As a sign of the Holy Father’s concern for migrant families and individuals, the apostolic trip to Cyprus will be accompanied in the coming weeks by a humanitarian gesture of welcoming about 12 refugees, some of whom the pope greeted this evening at the end of his ecumenical prayer with migrants,” said Matteo Bruni, director of the Vatican press office.

At the prayer service Dec. 3, the pope said the government of Cyprus should not be blamed for knowing that it cannot welcome and resettle the thousands of migrants and asylum-seekers that have reached its shores. The country currently has the highest percentage of migrants of any country in the European Union.

The government of Cyprus had said the pope would make arrangements for the transfer of 50 migrants, including two from Cameroon, who have been living since May in a tent on the U.N.-patrolled green line that serves as a buffer zone between the country’s mainly Greek Cypriot south and the mainly Turkish Cypriot north.

Bruni said promising to bring a dozen migrants to Italy in the next few weeks does not rule out more following later. In fact, news agencies were reporting that the others would follow in January and February.

The transfer of the 12, he said, “will be made possible thanks to an agreement between the (Vatican) Secretariat of State, Italian and Cypriot authorities, in collaboration with the Section for Migrants and Refugees of the Holy See and the Community of Sant’Egidio.”

The lay Catholic Community of Sant’Egidio, the Federation of Evangelical Churches in Italy, the Waldensian Church and, more recently, the Italian bishops’ conference and Caritas Italy have signed a “humanitarian corridor” agreement with the Italian internal affairs ministry.

The ministry issues humanitarian visas to vulnerable migrants and refugees, who are identified by the church groups and supported by them as they begin a new life in Italy. The support includes housing and food, but also Italian language lessons and introductions to Italian culture and social life.

The 12 Syrian refugees the pope took on the plane with him to Rome from the Greek island of Lesbos in 2016 entered Italy under the program and are still being followed by the Sant’Egidio Community, although the adults are working and the children are in school.

From February 2016 to late November, the program brought more than 4,200 people to Italy, Sant’Egidio said. Similar arrangements have been made with the governments of other European countries.