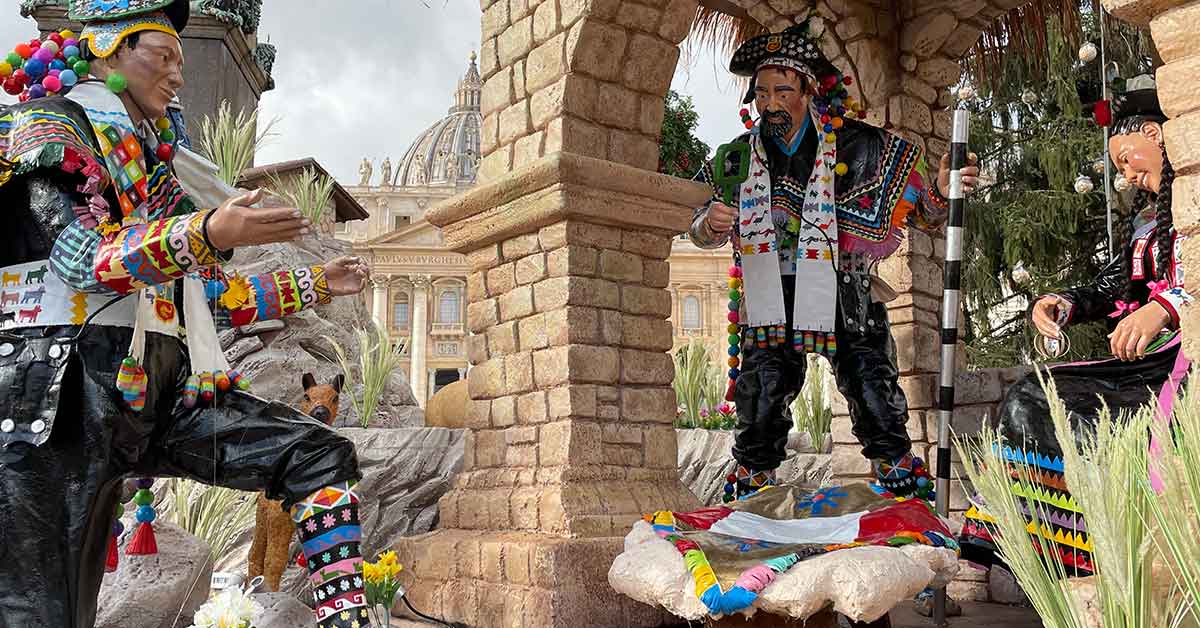 Figures are pictured in the Nativity scene in St. Peter’s Square during a preview for journalists at the Vatican Dec. 9, 2021. The Nativity is from Peru’s Huancavelica region and will be unveiled to the public Dec. 10 during a Christmas tree lighting ceremony. (CNS photo/Junno Arocho Esteves)

Bishop Salcedo joined Jorge Eduardo Román Morey, the Peruvian ambassador to the Vatican, and other Peruvians to show journalists around the Vatican Nativity scene on Dec. 9.

In October, the Vatican City State governing office said the 30-piece Nativity scene from Peru’s Huancavelica region was chosen, in part, to mark the 200th anniversary of Peru’s independence.

Statues of Joseph and Mary, as well as the Three Kings, are dressed in the traditional bright, multicoloured garments of the region’s Indigenous Chopcca people.

Unlike more traditional depictions of the Magi, trudging to Bethlehem with camels and gifts of gold, incense and myrrh, the Andean interpretation has them accompanied by llamas and bearing sacks of food from the region, including corn, quinoa and potatoes.

In front of the llamas, an angel, dressed in traditional Andean clothing, hails the birth of the Messiah by playing a flute in one hand while banging a drum with the other. Overlooking the Peruvian Nativity scene atop a tree is an Andean condor, the country’s national symbol, with its massive wings spread preparing to soar the heavens. 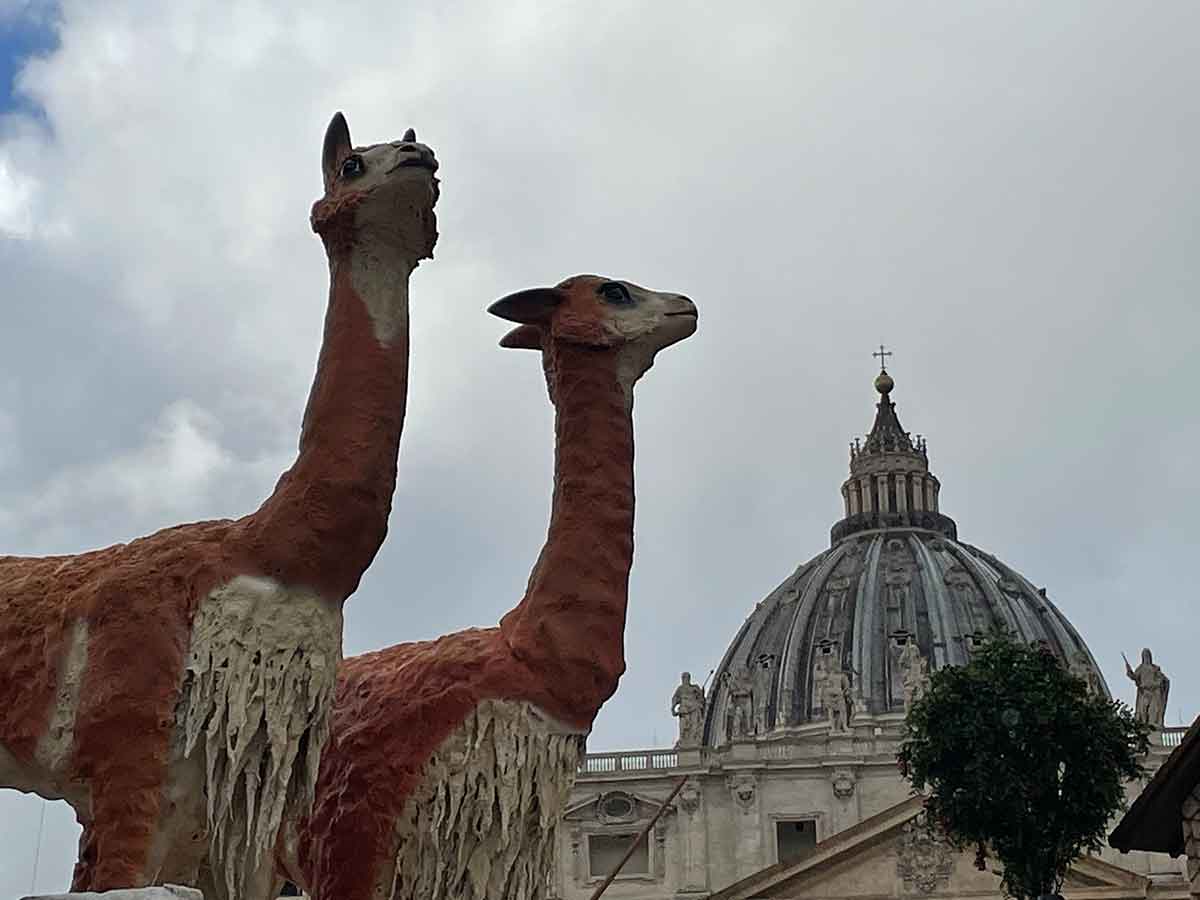 Figures of vicuñas, a species related to llamas, are seen in the Nativity scene in St. Peter’s Square. The Nativity is from Peru’s Huancavelica region. (CNS photo/Junno Arocho Esteves)

Bishop Salcedo told reporters the crèche “represents the Chopcca people’s faith in Jesus” as well as the hope they share “despite the difficulties, such as the pandemic as well as the other ‘pandemics,’ like poverty, corruption or the neglect of government authorities.”

The Peruvian bishop, who was appointed by Pope Francis in May to lead the Diocese of Huancavelica, said he continues “to learn from the hope and faith” of the Chopcca people which “helps me very much with the work that I am fulfilling at a pastoral level.”

“The people are happy and celebrate their faith with joy, and it is expressed in their community life,” he said. “That is something very beautiful, and as a new bishop, little by little, I am learning more.” 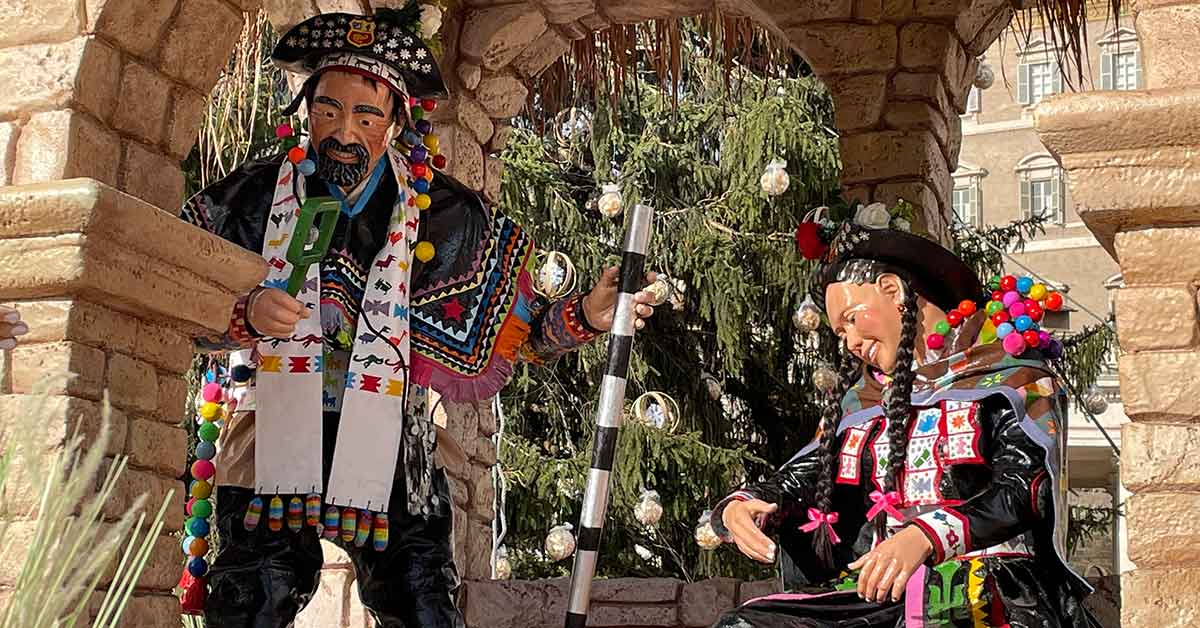 Statues of Joseph and Mary are pictured in the Nativity scene from Peru’s Huancavelica region. (CNS photo/Junno Arocho Esteves)

As Peru’s ambassador to the Vatican, Román told journalists the Nativity scene is “a representation of the richness of Peru’s culture.”

“It is an honour for Peru to be represented here in St Peter’s Square this Christmas, after we, and the whole world, have been closed,” he said. “After two years, today we can be present, and being here in the square is a privilege for Peruvians.”

The garments as well as the multicultural characteristics of the statues in the Nativity scene, he added, are not only representative of Peru’s diversity but also a testament to the faith of the Chopcca people who “are a very great and fervently religious people who celebrate Christmas in a special way.”

The Chopcca people “observe the festivities with much devotion. So, what you see here is their interpretation of what the tradition of Christmas and the Nativity would be,” Román said.

The Vatican Nativity scene was to be unveiled the evening of December 10, along with the lighting of the 27m-tall spruce tree. They will remain in the square through January 9, the feast of the Baptism of the Lord.