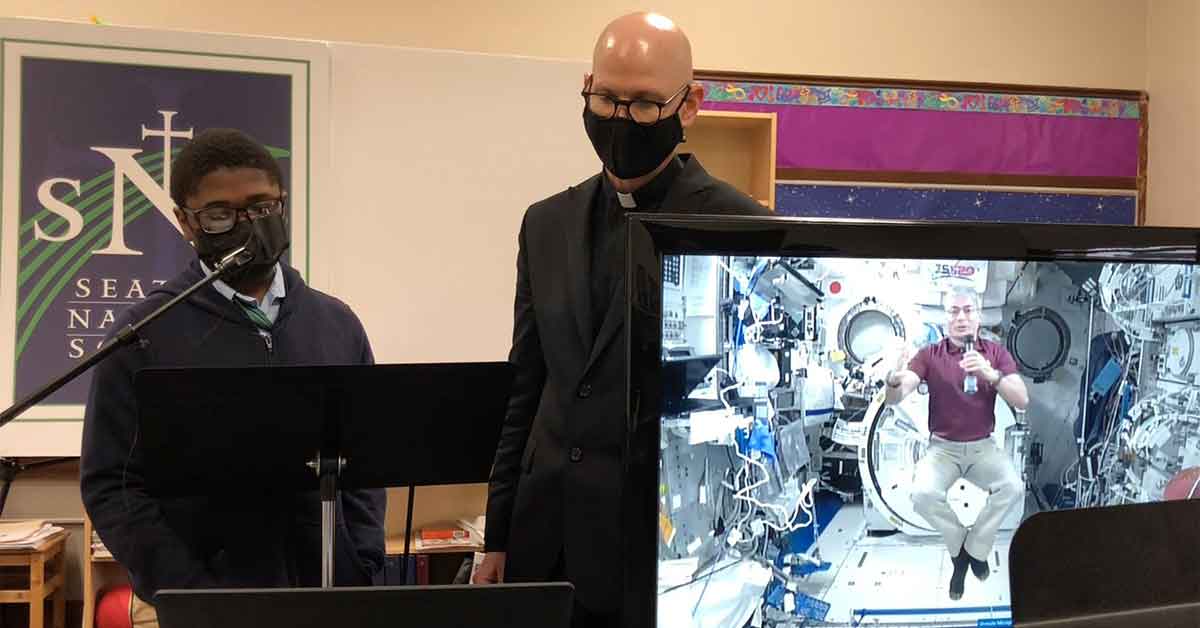 “How has being in space affected your view of God?” asked one eighth-grader at the Jesuit middle school.

Vande Hei paused. This was not the usual inquiry.

Then he answered: “It has made me feel like God’s really complicated. Human beings have worked really hard to understand God and our relationship with God. I think I’m much more accepting of the wide variety of ways human beings experience God,” he said.

Students at the middle school had the privilege of talking to an astronaut in orbit thanks to a live video and audio link orchestrated by NASA and Vande Hei’s connection to Jesuit Father Jeffrey McDougall, president of the 75-student school focused on a STEM (science, technology, engineering and mathematics) education.

Growing up, Father McDougall played football with Vande Hei, a classmate at Benilde-St. Margaret’s High School in Minnesota and he would often brag to his students that he knew an astronaut – one on the International Space Station, no less.

Word that Father McDougall was telling his students about Vande Hei spread and the priest said he started getting emails from NASA. The way the priest tells it, Vande Hei said, “If he’s talking about me, I should talk to them myself.”

The goal of Seattle Nativity School is to break the cycle of poverty for its students through a Jesuit education focused on STEM.

The school serves students in grades six to eight whose families earn a median income of $31,719 a year. More than two out of three students at the school are African American; nearly one in five is Hispanic.

The school’s inaugural class graduated in 2016, and its support of those students continues into their college careers, helping with applications, financial assistance counselling and more.

Fast-forward to a day in early December 2021, and Seattle Nativity students were eagerly waiting to be connected to the International Space Station.

“Here we go!” one student excitedly shouted as the video appeared on screen and Vande Hei, a flight engineer, casually floated into view wearing khaki cargo pants and a burgundy polo shirt. He read from a tablet computer, which he then attached to his pant leg. He performed a couple of zero-gravity backflips while waiting for the audio to connect.

While the students could see him via a video link on a screen in one of the school’s classrooms, Vande Hei could only hear them. Father McDougall stood at the microphone and the students queued up to talk to the astronaut.

Most of the questions covered predictable ground: How do you sleep? Without gravity, how do you exercise? What do you miss most about Earth?

He mentioned some of the work the space crew is doing, like trying to grow chillies in space, using a syringe to water them; recycling 95% of all water used; and conducting an experiment to help people better understand how to prevent Alzheimer’s.

“I have a very strong sense of purpose,” Vande Hei said. “What I’m doing is helping all of humanity.”

When Vande Hei returns to Earth in March, he will hold the record for the longest single spaceflight – 353 days – for an American.

He talked about international camaraderie on the space station, noting that the current crew consists of two Japanese astronauts, three Russians, one German and three Americans. They share a weekly meal, often with foods from one of the astronaut’s cultures, and they’ll stay up late to watch a movie together.

“I’m up here with some people that are wonderful to go camping with and we’re all in this big camper cruising around the world at eight kilometres per second,” Vande Hei said.

He does miss being outside, “feeling the wind and the rain, being able to see trees very easily, not 400km away.”

But Vande Hei has seen some amazing sights from space — the most beautiful being auroras in both hemispheres, he said.

“They are these ghostly green curtains that make you feel very tiny, like there’s processes you’re getting to witness that look like they’re constantly changing, but they’ve been going on for well before humans ever lived on the earth,” he explained.

Vande Hei also spoke to the students about the importance of teamwork and education.

“My Catholic education … really taught me the importance of putting other people first, and that helps you be a good team player,” he said.

“The things you’re learning about in your school are really, really essential,” he said, “not just to becoming an astronaut, but just being a happy, successful and productive human being.”