Restorative principles can be applied to Synod Preparations 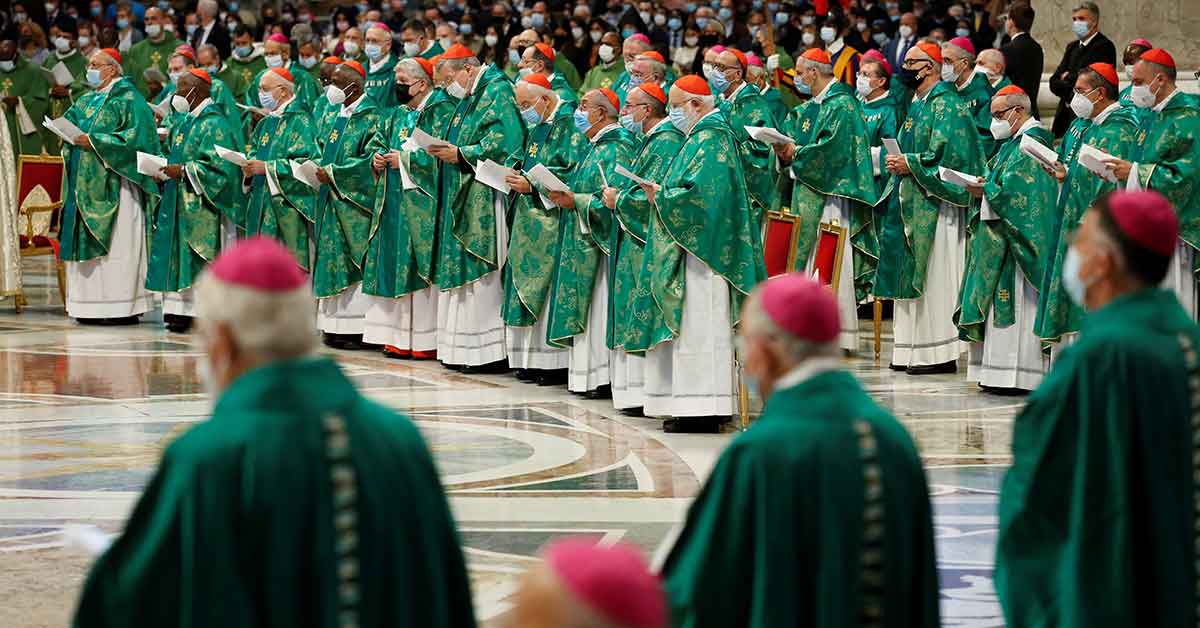 Cardinals and bishops attend Pope Francis’ celebration of a Mass in St. Peter’s Basilica at the Vatican Oct. 10, 2021, to open the process that will lead up to the assembly of the world Synod of Bishops in 2023. (CNS photo/Remo Casilli, Reuters)

By Mark Pattison – Applying the principles of restorative justice to the diocesan preparatory hearings on the upcoming world Synod of Bishops on synodality can make the process work like synodality, speakers said during a Jan. 11 webinar sponsored by the Catholic Mobilization Network.

Two keys, panelists said, are reaching out to Catholics who have grown estranged from the church and being in touch with one’s own trauma.

“We don’t have to look far to find those who are alienated … sometime we can look to our own families, said Jesuit Father David McCallum, executive director of the Program for Discerning Leadership. “Talking to your own families and friends who have become disaffected from the church is a good start.”

Restorative justice is “a victim-centred approach to justice,” said Caitlin Morneau, the Catholic Mobilizing Network’s director of restorative justice. “Its principles resonate deeply with Gospel vision.” Restorative practices, she added, “give all involved in a situation a way to be heard and work together for a way forward.”

The questions to ask, Morneau said, are the same as in restorative justice practices: “What was the harm, who was harmed and what needs to be done to make it right?”

Cotton told of one restorative justice practice in Seattle, where his job includes overseeing prison ministry.

Two teen boys, both 16 and poor, and one of them in a gang, had committed first-degree robbery. The judge involved in the case invited Ramon, the gang member, to sit in a “restorative circle,” which took place over the course of one year.

“One of the things restorative practices make possible is that it allows for the kingdom of heaven to unfold,” Cotton said. One revelation, he added, was that both criminal and victim were dealing with their own traumas.

After the sessions had concluded, the judge in the case, according to Cotton, said from the bench, “I have never seen such transformation. I wonder if it might be possible to step off the bench and give you a hug.”

“And he drew this tattooed gang member into a full hug. And I was sitting in the back of the courtroom, and thinking to myself, “Now, THAT is the kingdom of God,'” Cotton said. The scene was replicated later, when Ramon was in line at a fast-food restaurant, and working behind the counter was his victim, who came around the counter to embrace Ramon.

The circles helped answer “how is Ramon going to be held accountable for his crime? How is he going repair his harm?” Cotton said. But that spawned another question: “When was a time that you caused harm and the hammer never fell? You were let off the hook.”

“Everybody had to go around (and answer this). That included the judge, the prosecuting attorney. All of a sudden, everyone started sharing vulnerability where we had caused harm … and where we had caused grace,” Cotton added. “This was no longer about Ramon,” but “about all of us showing up as people, as fellow sinners.”

The process, he said is “really grounding them in ceremony and ritual and prayer” when starting a synodal session. “That’s why we do the Kyrie eleison at Mass.”

“From the synod on the Amazon, we have already listened to the cries of so many Indigenous people,” said Sister Nathalie Becquart, a French Xavierian sister, who is undersecretary of the synod’s general secretariat. In the same way, people on the margins need to be heard for the synodality synod. Synodality with Pope Francis, she said, means “all of the church, all of the time.”

Sister Becquart added, “Synodality is passing from the ‘I’ to the ‘us.'”

“A synodal church is a relational church” with “the need to be rooted in prayer and reflection,” she noted. It is both “a personal and communal conversion.” She told the nearly 500 webinar participants to use networks, organisations and charities “if you want to reach the margin of the people.”

For instance, “where are the young people? And you have to partner with that kind of organisation,” Sister Becquart said. Moreover, “not everybody has the same language the same way to express his or her voices. Be aware of the diversity of ways to listen and tell people to speak up and to share their voices.”

Father McCallum acknowledged, “There’s fear, there’s cynicism, there’s distrust” that the synodal process will achieve its stated aims. “But synodality will require us to move past our fear, our cynicism and our distrust.”

He added, “It’s not going to be completed in two years or 20 years. It’s like a river that is beginning to tumble over a dry riverbed. There’s going to be stones, but the river is going to continue and move forward. Let’s be that water.”