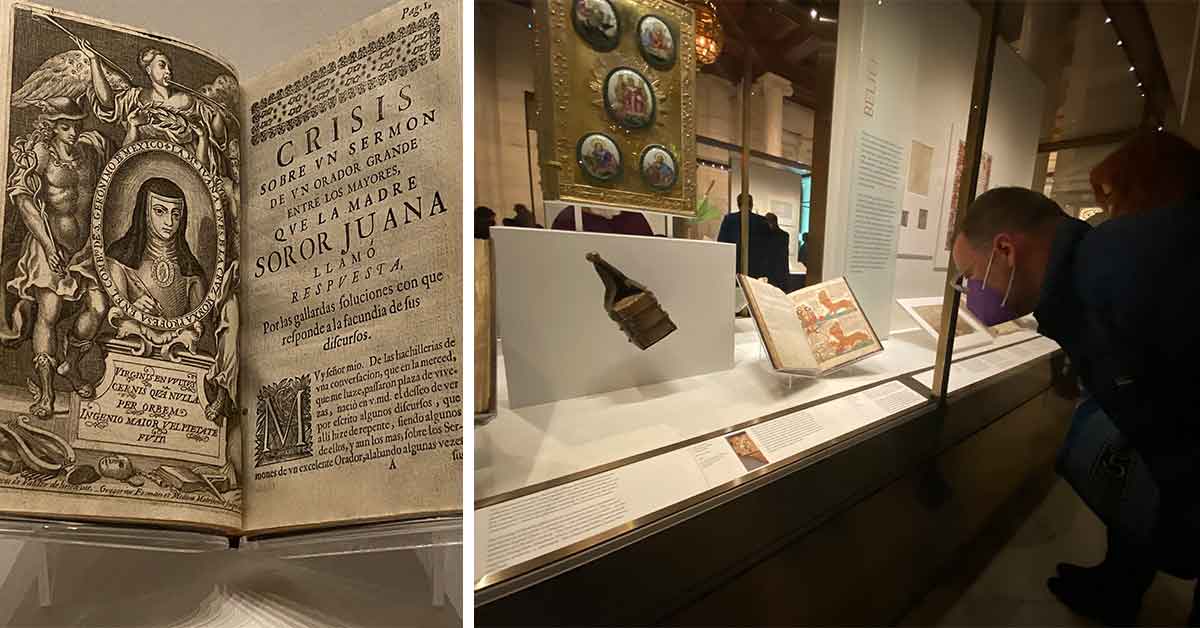 (Left) A rare edition of a book written by a Catholic poet, philosopher and nun known as “Sor Juana Ines de la Cruz” is seen on display at the New York Public Library Dec. 29, 2021. It is part of a “Treasures” collection offering the public a glance at some of the library’s rarely seen gems, including a ballet slipper designed by Coco Chanel, Virginia Woolf’s walking stick and a desk that once belonged to Charles Dickens. (CNS photo/Rhina Guidos). (Right) A visitor looks at one of the items in the “beliefs” section of the New York Public Library’s “Treasures” collection at its flagship branch in New York City. (CNS photo/Rhina Guidos)

By Rhina Guidos –  One of the most progressive items at a New York Public Library exhibit, perhaps overlooked by visitors heading for pop culture gems such as the hand-painted ballet slipper designed by Coco Chanel and an Andy Warhol oil painting of a Studio 54 ticket inscribed to Truman Capote, belongs to a nun.

It’s a rare edition of a book written by a Catholic poet, philosopher and dramatist often described as a “protofeminist” nun.

The 17th-century “Second volume of the works of Sor Juana Ines de la Cruz” has rightfully earned its place in the aptly named “Treasures” exhibit at the library’s flagship branch in New York, which in September began offering the public a glance at some of the institution’s rarely seen gems.

It will remain as a permanent exhibit thanks to a $12 million donation.

In its digital gallery, the library explains that Sor Juana “is among Mexico’s most significant literary figures, having achieved fame in her early teens as an intellectual.” Some of her works, which included plays, were critical of men’s attitudes toward women, but she also wrote love poems as well as works that showed solidarity with the plight of women of her time.

The book is “considered her most important collection” and the library’s 1692 first edition on display is “exceedingly rare, with only six copies known to exist,” the library said.

It is easy to pass by the book, which competes for attention with Thomas Jefferson’s handwritten copy of the Declaration of Independence, stuffed toys that inspired the creation of Winnie the Pooh and Virginia Woolf’s walking stick.

But it has been living in the good company of history, among somewhat odd items – a lock of Beethoven’s hair (also on display) – and is now one of 250 items from the repository of the library deemed worthy of the public’s interest.

For believers, including Catholics interested in the cultural contributions by church members or works related to the church, the exhibit includes a 15th-century breviary, a “girdle book” from 1454 belonging to a Brother Sebaldus, prior of a Benedictine monastery in what is now Germany.

It is austere with the exception of “four modest hand-coloured woodcuts pasted into the interior,” featuring apocalyptic scenes of the Book of Revelations. Another woodcut appears to be St Francis of Assisi receiving the stigmata.

There’s also a document dating from 1550 to 1600 called the “Nican Mopohua,” which the library described as “the earliest recorded apparition in the Americas of the Virgin Mary” as Our Lady of Guadalupe.

The library said that “the incident is recorded in Nahuatl, the language of the Mexica (later known as the Aztecs), using iron gall ink containing cinnabar, a poisonous mineral that the Aztecs considered sacred, on extremely expensive European paper that priests and royal authorities used for religious and political documents.”

The document is grouped with stamp-size depictions of apparitions of Our Lady Guadalupe, including with the souls in purgatory.

Another item of interest is a 1470 engraving by Martin Schongauer featuring St. Francis, “a 4th-century Coptic hermit, beset by a fiercely agitated band of monstrous demons.”

“A pioneer in the art of engraving, Martin Schongauer employs a wide range of inventive burin marks — incised on the plate with the engraver’s tool–to animate the composition and articulate the bizarre creatures’ combination of scales, spines, fur, feathers, talons and teeth,” according to the library’s digital archive.

“By focusing on the isolated central action described in 4th-century theologian Athanasius’s account of the saint, Schongauer’s image functions as an icon,” it said. “The image transcends the details of its origin story to represent a more commonly shared human experience — that of being overwhelmed by troubles of any and every sort.”

The religious items are grouped with other objects related to various faiths in a section called “Belief.”

Though the exhibit is free, visitors must get a timed ticked at the library. However, the website says shortages due to rises in coronavirus cases may limit hours or whether the building opens.

For those unable to make it to New York City, the exhibit is accessible online at www.nypl.org/events/exhibitions/galleries/belief.