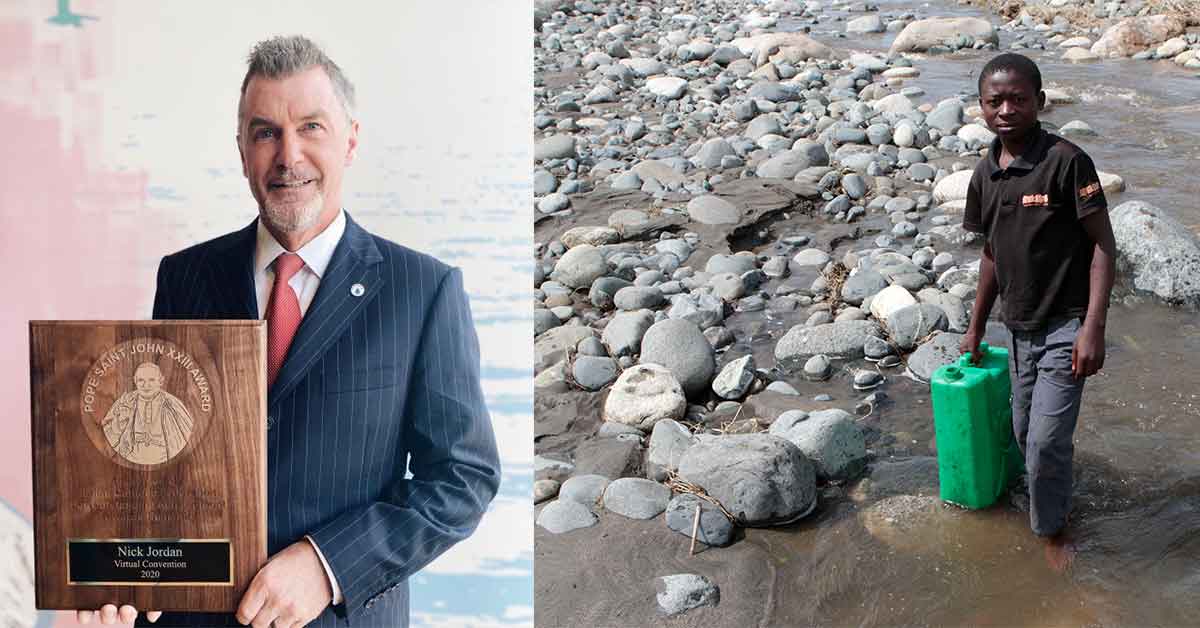 (Left) Nick Jordan, founder of Wells of Life, is the Italian Catholic Federation’s 50th recipient of the Pope St. John XXIII humanitarian award. (CNS photo/Handout via Kirsten A. Fedewa).(Right) A boy in Kasese, Uganda, gets water from a riverbed on May 8, 2013. (CNS photo/James Akena, Reuters).

By Mark Pattison – When Catholic real estate developer Nick Jordan made a trip to Uganda to look at the village schools he had helped finance, he was bothered by what he saw: far more boys than girls as students.

The girls were needed, it turned out, to accompany their mothers to water sources to bring back water for the household. “I was annoyed and angered at how unfair this really is,” he fumed at the memory. “A school without a water well is just an unfair and uneven opportunity.”

“When you are that close to something as horrible as poverty, you have a choice to make,” Jordan said. “Do I got back to being a real estate developer … or start an organisation from the ground up?”

Actually, it was more like from the ground down.

He continued: “Before I left Africa, I sat down and wrote 20, 30 pages, which became the foundation for Wells of Life,” the charity Jordan established. “I made a commitment to drill a thousand wells.”

To date, Wells for Life has raised enough money – just from the United States and Ireland – to build 650 water wells in the country since 2010 and repair another 150 wells that had fallen into disuse due to neglect.

“Forty percent of wells in Africa become abandoned after two years,” Jordan told Catholic News Service in a Dec. 30 phone interview near a California airport where he had dropped off his son. “Does that not just break your heart? The only thing worse than not having water is to have water and then not have it be available.”

He added: “Just because you provide a water well. if training isn’t provided with the water well, the community does not take ownership of that particular well and it does not learn how to use the water.” To correct that, Jordan said: “We have developed a ‘WASH’ program. Water, Access, Sanitation and Hygiene. It’s essentially a yearlong program to teach the local community how to have best practices in hygiene and sanitation.”

For Jordan, it all began in his native Ireland. “When I was a very young boy, 4 years old, my mother would walk to a well a quarter-mile from the house. She would basically walk and carry two buckets of water every day, at least once a day.” From that, “I had a very clear understanding of what water was, first of all,” he added. “Second, I learned how heavy water was.”

From that school-inspection tour, Jordan was determined to “create a culture where it’s unacceptable for a child to die due to lack of sanitation. It simply should be unacceptable for children to have to die for lack of water, or die because the water is just 60 feet underneath their feet.”

Hopes can die, too. “The next generation that followed their mother are young girls. If they have any dreams, their dreams are crushed immediately” to do instead what their mother did, Jordan said, noting that water “breaks the cycle of poverty.”

Being registered in Uganda, he said, “gives us quality control.” The wells drilled by Wells for Life, Jordan added, should last for 25 years. It costs about $8,000 to build a well, he noted, once a hydrologist determines the best site to drill.

His work has merited him an audience with Pope Francis. In 2020, Jordan was named by the Italian Catholic Federation as the 50th recipient of their Pope St. John XXIII Humanitarian Award.

Jordan has not let colon cancer deter him, either. He revealed the cancer diagnosis last January to Wells for Life’s board of directors. He said that after having raised $1.6 million in 2020, they wanted to let Jordan take it easy and aim for just $1.5 million in 2021. Instead, Jordan said, he told the board he wanted to raise $2 million. The total by year’s end, according to Jordan: $2.2 million.

“Our most dynamic fundraiser is 88-year-old Sister Joan Hogan,” a member of the Sisters of the Holy Faith order based in Dublin, Jordan said. “She has raised the funds for 45 water wells herself. She goes to a little church and money falls. … She is spending every day of the rest of her life raising funds for water. She is a force for life, for good, unlike anything I’ve seen on the planet.”

He added: “Our youngest donor is only 13, and she’s raised the funds for five wells.” Each well, Jordan estimates, “is going to change the lives of 1,000 people, save the lives of 10 kids and help about 200 mothers.”

Before Jordan submitted to a CT scan Dec. 28, he said he convinced the nurse to become a “water warrior,” making a contribution to Wells for Life equivalent to a few dollars a day.

And his cancer? “I’ve defeated that foe,” he replied, “and believing I am cancer-free. It was a year of prayer. … stage 4 colon cancer is pretty serious,” Jordan said, but “when you have a quarter-million to a half-million people in Uganda praying for you, you have no fear.”

He wants to get to the 1 million mark of Ugandans benefiting from water wells before 2022 is out. To meet that goal, Wells for Life would have to raise about $2.5 million. Jordan is undaunted.

But not only does he want to bring water within easy reach of Ugandans, Jordan said his aim is “to touch the lives of every single Catholic in America.”