Catholics in a Secular World 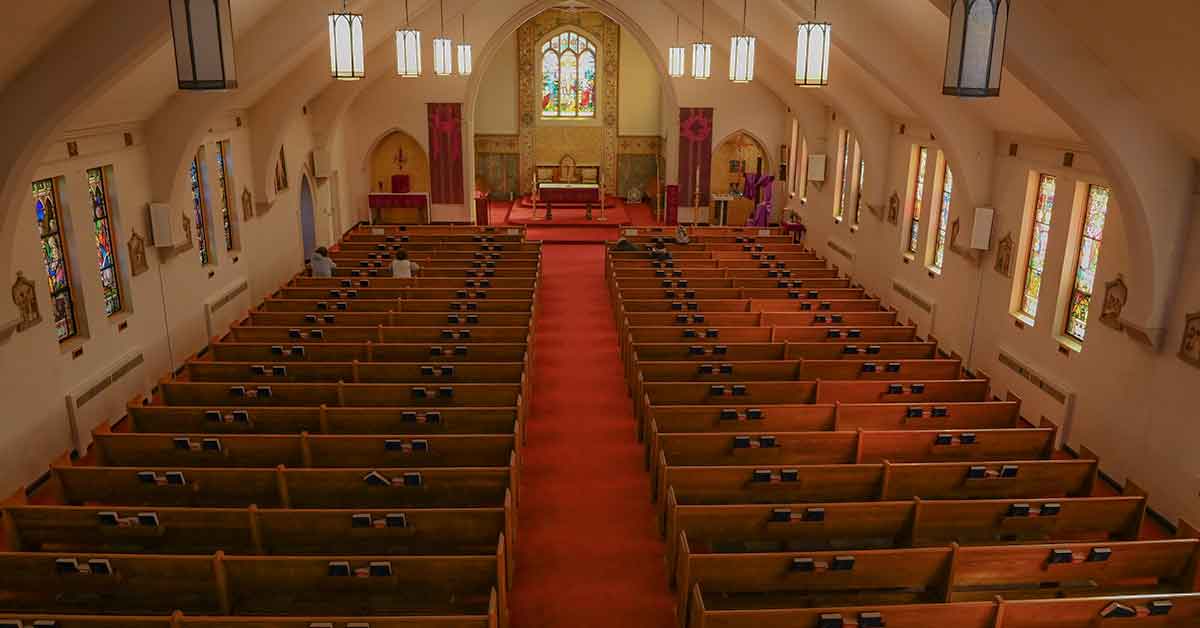 People pray in a church in Toronto, Canada. Secularisation and Covid have left churches empty in many parts of the world. (CNS photo/Michael Swan, Catholic Register)

When I visited my family in the UK recently, I was struck again at how secular the country has become.

Of course, church attendance the world over has been affected by the Covid pandemic — and in many countries, people are not immediately returning to pre-pandemic patterns of religious practice. But what is more striking is the visibility, or lack thereof, of religion in public life.

South Africa has a strictly secular constitution in which there is no preference for one religion over another, or indeed for the religious over the secular. The various discussions about former Chief Justice Mogoeng Mogoeng’s religious views have reminded us of these important constitutional safeguards, especially relevant given the history in South Africa of regimes promoting the concept of a state religion.

South Africa is a secular state and yet a very religious nation. The Pew Research Centre in 2018, pre-Covid, found 93% of South Africans affiliating to some kind of religion, with 75% saying religion is “very important” to them, and 55% attending a religious service at least once a week.

By contrast, the UK is a religious state and yet a very secular nation. Constitutionally, the Church of England has a specific role, its bishops are appointed in the name of the queen (with some of them sitting ex-officio in parliament), and every resident, whether they choose to exercise it or not, is by default a member of their local Anglican parish. But the lack of religious behaviour could not be more marked!

While the same 2018 Pew study shows 77% of Brits affiliating to some kind of religion, it has only 10% saying religion is important to them and only 8% claiming that they attend a religious service at least once a week (though that may well be an overclaim). With similar-sized populations, this means that on a given weekend, South Africa has 33 million people in church (or mosque or temple), while the UK has at most 5 million!

This secularisation means that a British newspaper could in a fit of hyperbole yet credibly announce: “Christmas might be cancelled!” But this was not to suggest that there would be no celebration of the birth of the Messiah. Instead the great British consumer might be losing out on their relentless annual pursuit of shopping, eating and drinking. For most of my British compatriots, these are the only signs of the festive season.

As someone for whom religion is important and who works for two faith-based organisations, it might be tempting to see this secularisation as a crisis. Are we in danger of losing our moral compass if religion ceases to be important? The evidence does not support that fear. If we tried to plot a graph which mapped “being religious” against “being moral”, people of faith might hope (indeed expect) to see a straightforward line which shows that as people become less religious, they become less moral.

But it does not take a lot of reflection to see that’s not the case. We all know religious people who are far from moral; and you might well know moral people who are not interested in religion. I am pretty sure that there are many corrupt officials, rapists, wife-beaters, thieves, tax-cheaters among the 33 million South Africans praying in a religious building; equally, the moral edifice of the UK is not being held up solely by the 5 million Brits attending church.

In that case, does religion not really matter? After all, if religious and non-religious people are both likely to volunteer in their communities, give money to charity, fulfil their civic duties, work hard and pay taxes, does it really matter what they do with their Sunday mornings? This has become a greater concern for us now in South Africa as we try to persuade our former churchgoers to return to their pre-Covid habits.

There is one way of approaching this, which sees a clear distinction between the religious sphere and the secular; a version of Jesus’ famous injunction to “render unto Caesar the things that are Caesar’s” (Matthew 22:21). Thus, we recognise a clear difference in Catholicism between a religious marriage (which cannot be ended by divorce) and a state marriage (which can). It is on that basis that some countries with strong traditionally religious populations have endorsed same-sex marriage (as recognised by the state) while not imposing it on those religious groups who prefer not to endorse it.

I once read an interesting extension of this argument as an answer to those who seek to “put Christ back into Christmas”. It suggested that we just accept that there are two different December festivals: one called “X-mas” starts in late November, involves much X-cess consumption and celebration, and ends more or less with a hangover on December 25.

The other called “Christing-mas” starts only on December 24 but lasts until the Epiphany on January 6 (or the Baptism of the Lord the following week), and is celebrated through religious observance. “Jingle Bells” is the theme tune of the former, “O Holy Night” the anthem of the other.

But that does not entirely work for us, as Catholic Christians. We see Christ as incarnate in the whole world, not just in delineated parts of it. After all, that is what we have just celebrated at Christmas. We believe that Christ’s transforming power is everywhere. The quotation above from Matthew continues: “…and render unto God the things that are God’s”. That is the key injunction. By definition, everything is God’s since God is the creator of all things (visible and invisible). How do we render them unto God?

The model of the past — dating back to 313 when Constantine became the sole Roman emperor and legalised Christianity — was the creation of something called “Christendom”. Effectively, it was a political rule that saw Christianity as defining all aspects of public life. Historians can debate if this was ever a good thing, but it has been roundly rejected by countries that had held on to the concept for longest, such as Ireland or Spain, which have secularised most rapidly in recent years. Was medieval Christendom really very different from the return of the Taliban in Afghanistan where secular rule has been overturned by a staunchly religious one?

The hazard in this approach is that it reinforces the notion of two separate and competing realms — the sacred and the secular — and it tries to ensure that the religious approach is triumphant. If this is our hope, we will be disappointed when this is not the case. For example, one of the signs of secularisation in the UK is the rapid emergence of non-religious people performing what we once regarded as religious roles: civic marriage officers have now been joined by humanist hospital chaplains and secular officiants at funerals. We feel that “religion” has lost some of its power. But if the religious people and institutions performing those roles for centuries really had spoken to the heart of human concerns, could they have been replaced so easily?

“Render unto God” is not the triumph of the religious over the secular world but the desire to see God’s will be done in both worlds.  Remember that Jesus had more to say to religious leaders who had lost their way than he had to political ones.

So let me offer this thought as we make our New Year’s resolution. Can I live my secular life and my religious life in a way that clearly shows that it is transformed by the incarnation of Christ? If I can show the word-made-flesh in all aspects of my life, perhaps I can attract others to invite Christ into their lives as well.