Veteran Radio Veritas broadcaster Colin Yorke has died at the age of 80. The co-presenter of the morning “Matins” show died peacefully in his sleep in the morning of January 13. 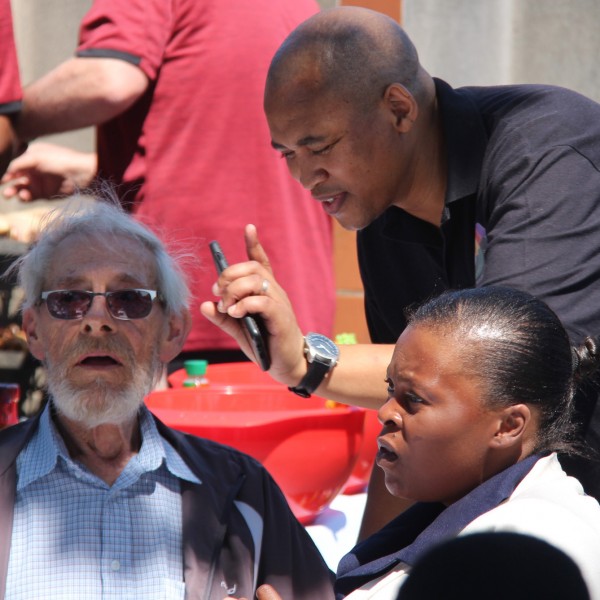 Colin Yorke (left), who has died at 80. At the back is his Radio Veritas “Matins” breakfast show co-presenter Khanya Litabe.

Born on September 2, 1941, in Cape Town, Yorke studied music at the Royal Academy of Music and the Royal School of Church Music in London and later joined the staff there as headquarters’ choirmaster. He conducted his own choral society and orchestra in addition to full-time secondary school teaching.

After returning to South Africa in 1989 he was appointed to the music staff of the Wits University and worked as a senior music presenter/producer and newsreader at the SABC.

He was appointed conductor of the Johannesburg Bach choir in 1990 and conducted many choral and orchestral concerts of the SABC Symphony Orchestra.

Yorke joined Radio Veritas in 2004 as presenter of “Colin’s Classics”, a daily classical music programme. He said it was a privilege for him to present a three-hour live programme every Sunday, “Sunday Matins”, which he called a good preparation for Sunday Mass.

He also enjoyed co-presenting the weekday breakfast show, “Matins” with Khanya Litabe. The team often discussed music and always had time for light moments of humour.

On the show, Yorke “interacted with both the young and old with affection and joy. His favourite phrase was ‘Bless your cotton socks’,” recalled Litabe, Radio Veritas’ station manager.

“We send our deepest condolences to Colin’s family, to the various musicians and broadcasters whose lives he touched and to all who knew and loved him. Colin will be sadly missed and deeply mourned by all of us at Radio Veritas. We have lost a friend, a good colleague and a gifted broadcaster,” Litabe said.