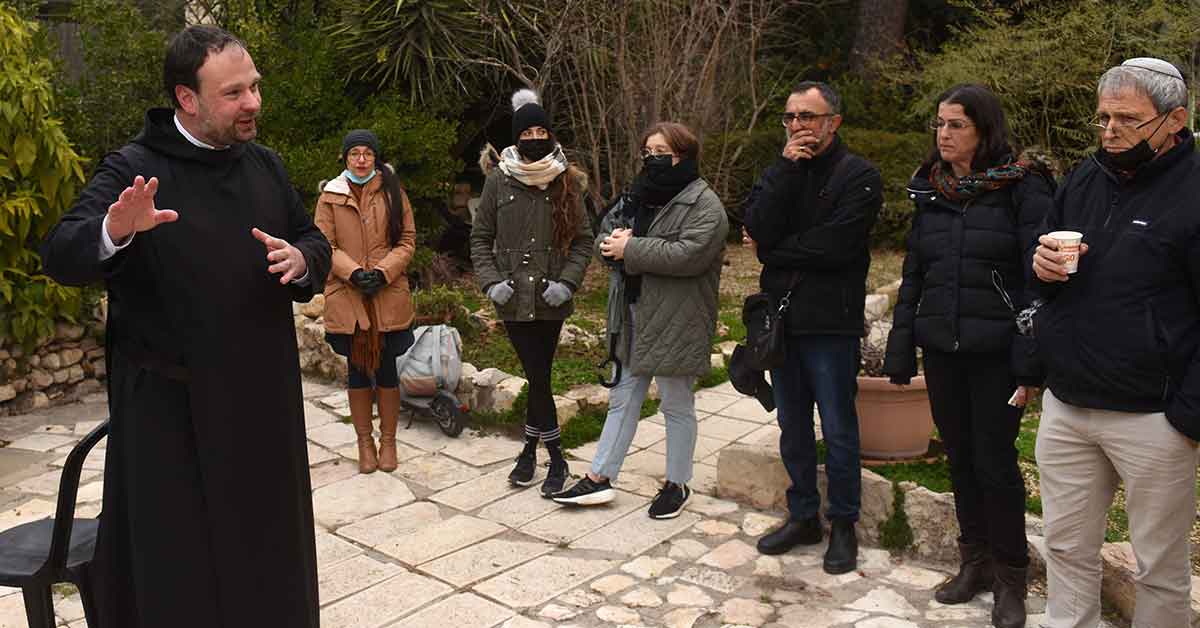 By Judith Sudilovsky – A Benedictine priest told a Jewish delegation visiting his monastery that the monks know the perpetrators of vandalism represented a small minority of radicalised Jews.

Father Nikodemus Schnabel of the Benedictine Dormition Abbey told a delegation of 12 Jews from the anti-racism group Tag Meir on Jan. 23 that an incident in an abbey courtyard was isolated but could have injured monks and students who regularly socialise there.

A bag of construction rubble was heaved over a stone wall separating the monastery from a public garden, breaking a tin roof and smashing plastic furniture Jan. 16, he said.

“I refuse to refer to these people as ‘the Jews attacking the Christians,'” the priest said. “This is not the case. We are speaking of a tiny hateful minority.”

The abbey, built on what is believed to be the spot where Mary died, is located on Mount Zion in the Old City. It has experienced at least five incidents of vandalism and arson since 2013.

It is near a Jewish yeshiva religious and the building which houses the traditional locations of the Cenacle, also known as the Upper Room, and the Tomb of David, a contested site among religious groups.

Father Schnabel called on the police to take more action against the vandals, who he said were from the extremist group known as “the hilltop youth” who have also been involved in violent attacks on Palestinian farmers and Israeli volunteers near illegal settler outposts in the West Bank.

“This has nothing to do with our Jewish tradition,” she said. “Whenever something hurts you, you have to open the door and we want to thank you for opening the door so we can stand with you.”

Jesse Burke, part of the delegation, said members of his family were involved in some of the extremist attacks, also against Jews.

He has taken part in solidarity visits and interreligious dialogue because, he said, he “wants to show a different face of Judaism.”

On Jan. 28, brothers Daoud and Daher Nassar, members of the Lutheran church in Bethlehem, were attacked on their farm outside of the city by a gang of 15 masked men from the neighbouring Palestinian village of Nahaleen. They were hospitalised following the attack.

The Nassar family farm – known as the Tent of Nations – is run as a centre of reconciliation and nonviolence and is the sole remaining Christian farm in the area, surrounded by Muslim Palestinian villages and Israeli settlements. The Nassars have been engaged in decades of legal battles in Israeli courts to retain possession of their farm and have been harassed by Israeli settlers; they also have been embroiled in a land dispute with a family from Nahaleen. Olive trees on the farm were burned in an arson attack by unknown assailants in late 2021.

In a statement, the family expressed appreciation for the support they were receiving from the Evangelical Lutheran Church in Jordan and the Holy Land and supporters abroad and said they were “optimistic about the commitment” of the Palestinian Authority to “end the dispute with the utmost of justice and urgency.”