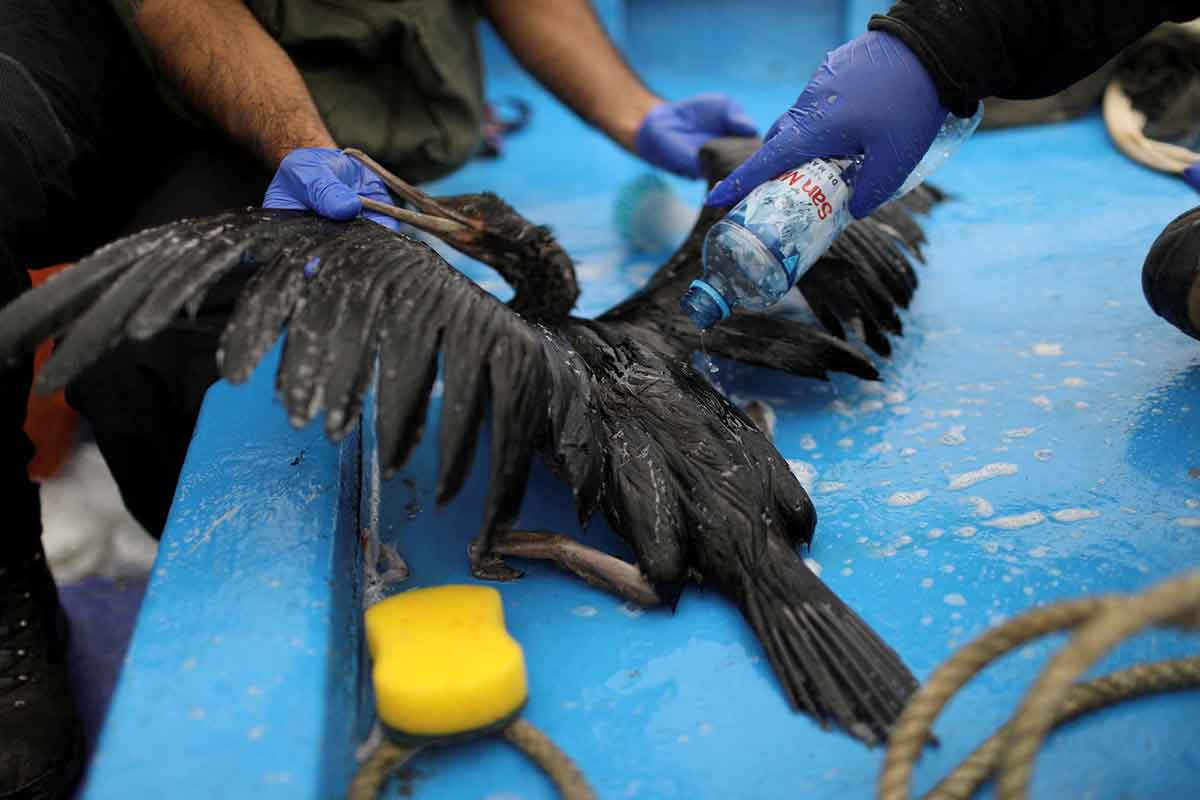 Biologists from the National Service of Protected Natural Areas (SERNANP) work on a bird on Jan. 21, 2022, in Ancon, Peru, affected by an oil spill near Lima. (CNS photo/Pilar Olivares, Reuters)

By Barbara Fraser –  After an oil spill fouled nearly 160 km of shoreline north of Peru’s capital city, the bishop of Callao, the seaport where the accident occurred, called for officials to repair the damage and care for “our common home.”

In a Jan. 23 message, Bishop Luis Barrera Pacheco called for those involved to “assume their responsibilities and commit to the immediate solution of this huge environmental damage that puts life in danger.”

The spill, which occurred on Jan. 15 as a tanker was offloading oil at a refinery, has left a tarry slick on beaches and wildlife. Less visible, however, is the long-lasting effect it will have on thousands of people who depend for food and a livelihood on the fish they catch or the shellfish and crabs they collect along the shore, Bishop Barrera told Catholic News Service.

“Those families have already seen a huge drop in their income,” he said. “And once the seabed is contaminated, those products lose their value in the market and harm those who eat them.”

The spill’s cause is being investigated. Initial reports said the tanker lurched and a pipe broke because of unusually high waves caused by the eruption of an underwater volcano in Tonga.

Ocean surges killed two people and damaged homes and businesses in some coastal towns in Peru, which did not issue a tsunami alert after the eruption, unlike its neighbours Chile and Ecuador.

The local subsidiary of Spanish-owned Repsol, which operates the refinery, initially played down the spill, saying it amounted to less than a barrel, and blamed the Peruvian Navy for not issuing a tsunami alert. Government officials later put the amount at about 6,000 barrels and said the company had been slow to react.

“Instead of arguing and avoiding responsibility, it is urgent to repair the damage to the commons, the beaches and the marine species that belong to all Peruvians,” Bishop Barrera wrote in his message.

Besides fishing families, the spill is affecting people who live close to the polluted shoreline, breathing fumes from the oil slick, and those with small businesses that depend on summer crowds that frequent the beaches that are now off-limits, the bishop told CNS.

In a country where most of the economy is informal, those people live on what they earn from day to day, and weeks or months without an income are devastating. The diocesan Cáritas office aids families in some of the poorest neighbourhoods and is considering how to address the long-term crisis families will face.

“We don’t see the greatest impact yet, but in the long run, we’ll see the effect on people’s income, lives and health,” Bishop Barrera said.

The disaster offers a chance for politicians and civic groups to meet and discuss serious measures to clean up the environment in Callao, where residents of some neighbourhoods have high levels of lead in their blood from inhaling dust from ore-loading facilities in the port.

“We need leadership from politicians so disasters like this are not repeated,” Bishop Barrera wrote. “We call on public officials to take an integral approach to environmental issues and to be concerned about the interrelated ecological, social, cultural and economic dimensions of creation.”