Munich cardinal to remain in office, apologises for role in abuse cases 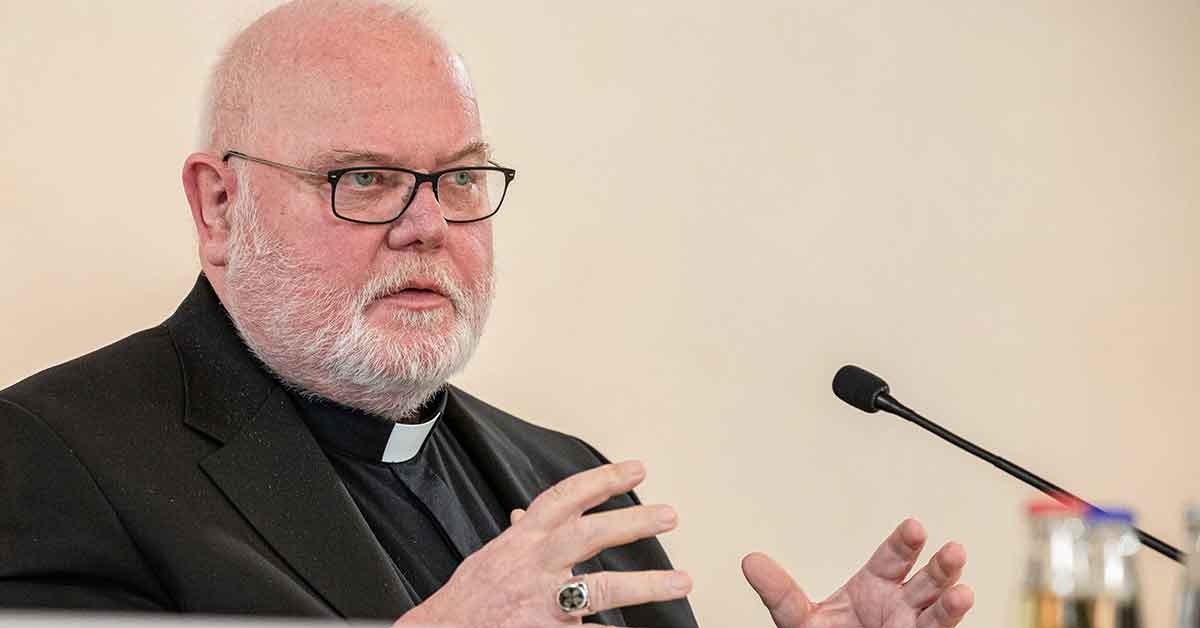 German Cardinal Reinhard Marx of Munich and Freising gives a statement on the Munich abuse report to the media Jan. 27, 2022. The news conference came a week after the publication of the report on abuse in his archdiocese. (CNS photo/Robert Kiderle, KNA)

By CNS – Munich Cardinal Reinhard Marx said he wants to remain in office, at least for the time being, despite findings critical of how he handled some abuse cases in the Archdiocese of Munich and Freising.

The cardinal had offered his resignation last June, but Pope Francis rejected his offer.

“I am not clinging to my office,” he said in a news conference on Jan. 27, adding: “The offer to resign last year was meant very seriously. Pope Francis decided otherwise and asked me to continue my ministry responsibly.”

Still, he said, “if I get the impression that I am more of an obstacle than a help” in promoting healing and moving forward, “I will seek dialogue with the relevant advisory bodies and allow myself to be critically questioned. In a synodal church, I will no longer make this decision alone.”

A report commissioned by Cardinal Marx and carried out by the Westpfahl Spilker Wastl law firm faulted Cardinal Marx’s handling of two cases of abuse during his tenure in Munich. The 1,900-page report was released Jan. 20 and looked at the handling of cases in the archdiocese between 1945 and 2019.

In two cases, the report said, “in the opinion of the experts … Cardinal Marx actually played a rather passive role. Using the sources of information available to them, in particular the files and the interviews with eyewitnesses, the experts were unable to establish, for example, that he had urged decisive action against accused priests.”

And while Cardinal Marx publicly has accepted “moral responsibility” for the handling of all cases during his tenure, the investigators said, “As the person who, according to canon law, is responsible for the management of the entire archdiocese, a legal responsibility of the archbishop for any shortcomings in his archdiocese therefore also should be taken into consideration.”

At a news conference Jan. 27 responding to the report, Cardinal Marx said, “Those who still deny systemic causes (of clerical sexual abuse) and oppose a necessary reform of the church in attitudes and structures have not understood the challenge.”

The report demonstrates, he said, that “the church was obviously, for many people, a place of calamity and not of salvation, a place of fear and not of consolation.”

The cardinal apologised to victims for what they suffered in the church and to the parish communities where abusive priests served. “I also apologise to the faithful in this archdiocese who doubt the church, who can no longer trust those responsible and who have suffered damage to their faith.”

Cardinal Marx did not attend the news conference for the release of the report, and he also apologised to people who were hurt or offended by that decision. However, he said, he had wanted the focus to be on the findings and not on himself.

The German Catholic news agency KNA reported that, at the Jan. 27 news conference, Cardinal Marx declined to give an assessment of the role of retired Pope Benedict XVI in the abuse scandal.

“I accept that he interprets the facts differently here, that he regrets, and I think he will comment on this as a whole,” the cardinal said.

The report by the law firm accuses the retired pope of mishandling four cases during his 1977-82 tenure as archbishop of Munich. Retired Pope Benedict denied this in 82 pages of testimony to the inquiry. His secretary has said he is studying lawyers’ document and will write a detailed reply.

Cardinal Marx said the report was “not a court verdict,” especially with regard to a man’s life achievement, but that it was an “important building block.” He said it was good that the retired pope had declared his willingness to contribute to the investigation.

Cardinal Marx repeatedly emphasised that he had made mistakes and that his biggest mistake was to have overlooked the victims.

“That is unforgivable. There was no real interest in their suffering on our part. In my opinion, this also has systemic reasons, and at the same time I bear moral responsibility for this as the incumbent archbishop.”

At the same time, the cardinal rejected accusations that he had delegated the issue too much. “Dealing with abuse in the church was and is a matter of top priority for me and does not run counter to the mandate to spread the Gospel. I was not and am not indifferent. Could I have acted more and with more commitment? Certainly yes!”

KNA also reported that Munich’s highest church judge, Father Lorenz Wolf, has announced he is stepping down from all his offices and duties. Cardinal Marx said he agreed with the decision and Father Wolf would “state his position in due course.”

In addition to his functions in the Archdiocese of Munich and Freising, where he has been a judge since 1977, Father Wolf heads the Catholic office, the church’s interface with the Bavarian government. He also chairs the broadcasting council of regional public broadcaster Bayerischer Rundfunk.

Westpfahl Spilker Wastl’s report said Father Wolf’s actions in 12 of 104 cases “give rise to criticism.” Father Wolf refrained from commenting on the individual cases, but hired lawyers who publicly doubted the legitimacy of the investigation. The main criticism in the lawyers’ report is that Father Wolf put the interests of the accused before those of the alleged victims in dealing with abuse cases.