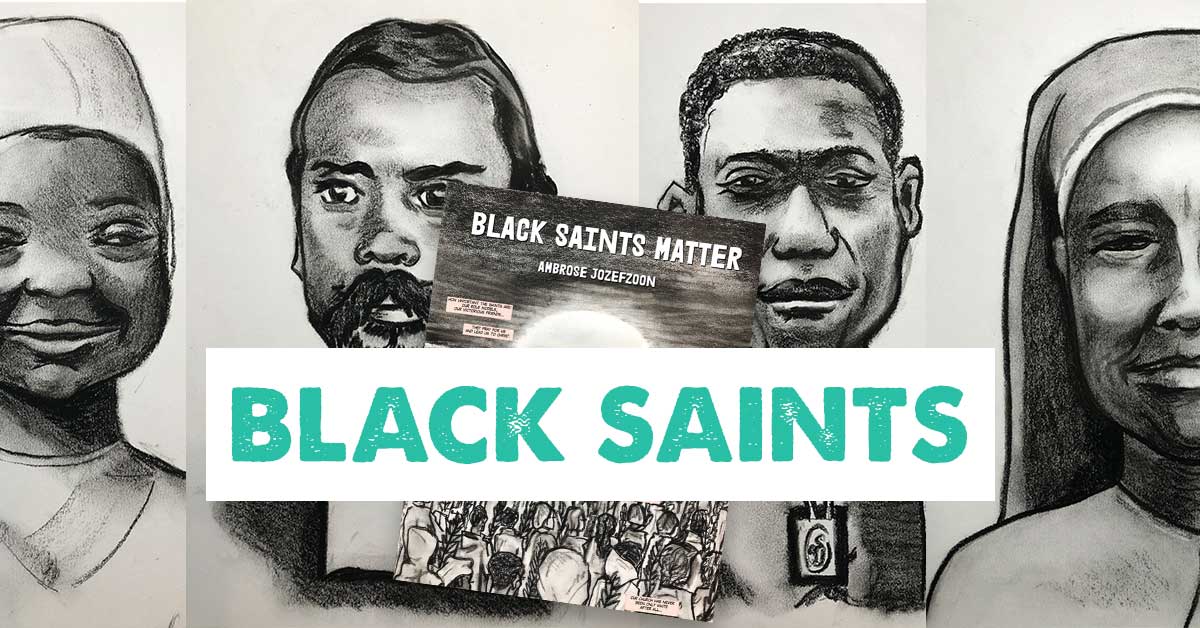 For a Caribbean artist, black saints don’t receive much attention — and he hopes his project will change that, as he told Günther Simmermacher

Saints are our role models, “our friends who have already won”, according to Ambrose Jozefzoon. “They pray for us and bring us closer to Christ. And if you can take an example from someone who looks like yourself, that really helps,” the 30-year-old artist from the Caribbean explains. “However, for black people, it often looks as if all saints are white.”

Ambrose is trying to change that perception with his Black Saints Matter project. “Lots of saints who are depicted as white in Europe were technically not white at all,” he points out. For example, many North African saints of the early Church, such as St Monica and St Augustine, likely were Berbers, and therefore dark-skinned. “But there are also a lot of more contemporary black saints still unknown to many. Actually, there are more than I had expected before I started my research,” Ambrose tells The Southern Cross.

This research has led to a series of drawings of black saints, some already canonised or beatified, and others still awaiting beatification. These saints —which include Bl Benedict Daswa, St Josephine Bakhita, St Martin de Porres, and St Charles Lwanga (all of whom featured in The Southern Cross over the past year) — span continents and eras. Eventually, Ambrose plans to “tell all the amazing stories about black saints who are still in the shadows” in a graphic novel, to be titled Black Saints Matter. He hopes that this will bring these men and women deserved attention and honour. He stresses that the project is aimed not only at black people but at anybody who is interested in getting to know the saints.

The project’s name obviously draws from the #BlackLivesMatter movement. “Of course, I have nothing against white saints. All saints matter,” Ambrose says. Then he adds: “But don’t the white saints get enough attention already?”

Still, one of his favourite saints is St John Paul II. “He started with a different look at the Church. Not only did he travel all over the world, even to areas where no pope went before, like here with us in the Caribbean. With his many beatifications and canonisations, Pope John Paul also opened the eyes to the universal Church. Saints can come from everywhere, not only from Europe. Of course, former colonies don’t have the same starting point, as evangelisation came with the colonisation. But in the graphic novel you’ll see that there were black saints already in the early ages.” 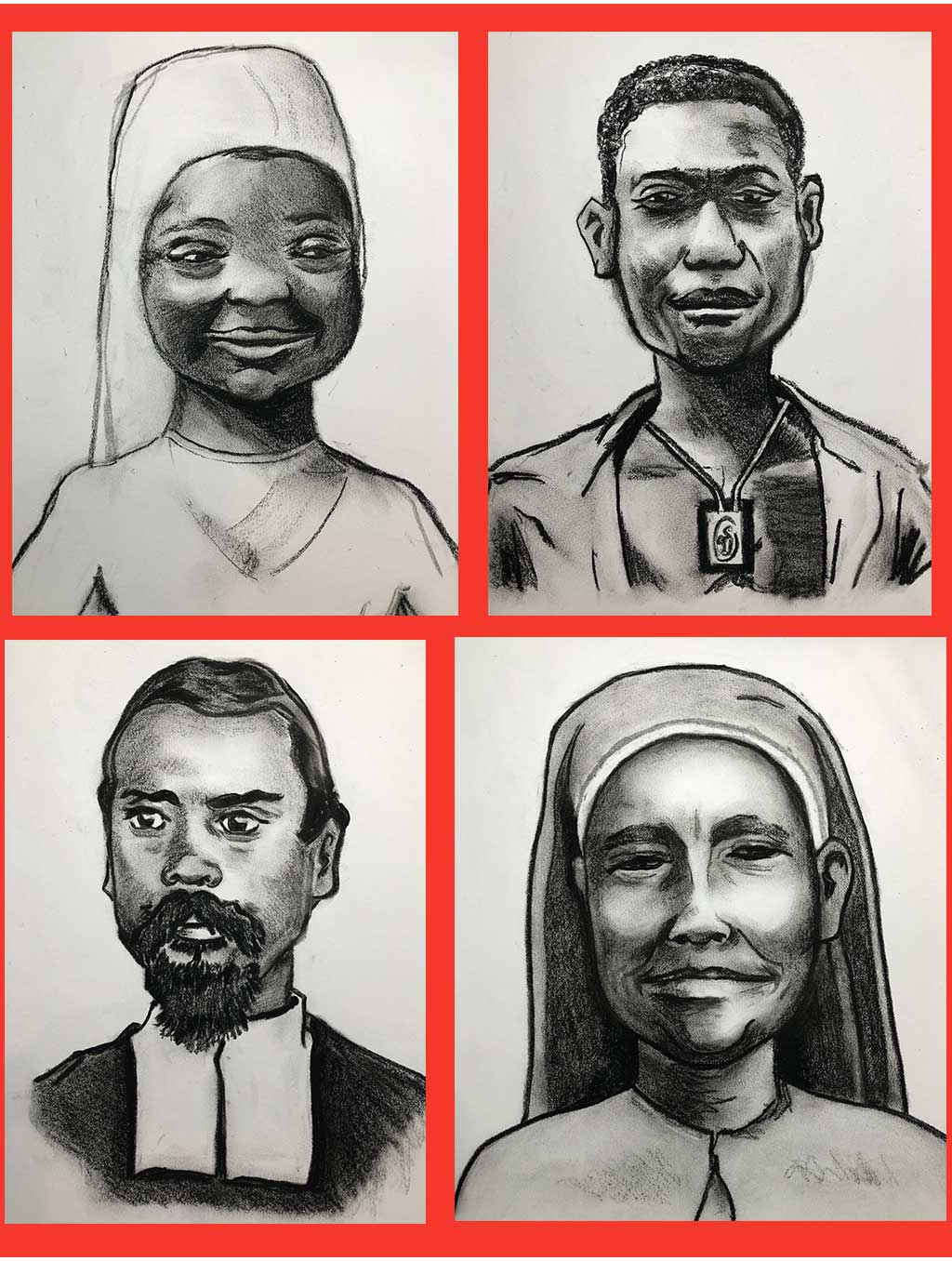 Ambrose comes from a close-knit Catholic family. “I owe my faith to my family. In the Caribbean, the churches are generally well-filled, except for now as Covid-restrictions are still active. In Europe that is different. The continent that used to send missionaries to our regions has now forgotten about the faith. Luckily, my parents gave a good example and prepared my siblings and me well,” he says.

“The Black Saints Matter project was born from faith, but it also deepens my faith by the great and inspiring examples I discover. We can see what discrimination did to the black saints, but also how they responded — with the courage to oppose hate with love. They show that all who keep the faith are welcome in heaven,” Ambrose adds.

“I have been drawing for as long as I can remember. Already as a young boy, I wanted to be an artist, though that turned out to be a harder challenge than you realise as a child,” he recalls. After studying art in Europe he came home, and has done graphic work for a few years. “But Black Saints Matter is my first solo project. It is also the project where my heart lies,” he says.

Drawing the portraits and forming a narrative for the graphic novel requires a lot of research. “I try to read as much as possible of the biographical information that is available. Also, I study photos and other art material from the time of the particular saint. I try to mould that information into a story that’s both historically accurate and dramatically convincing. Of course, I have to use my imagination and artistic freedom to come to concrete scenes and conversations, but always with the testimony of the lives of the saints in mind.”

So far Ambrose has publicly shared portraits and the first page of the graphic novel, mostly on Instagram and Twitter. “Most of the feedback is positive. Sometimes I get good suggestions or critical remarks. I really appreciate that and try to use them to improve my work. Only rarely do I meet with negative responses, but that also motivates me to go on with the project. It shows as well how important this project is.”

Ambrose places the saints at the centre of the project. He doesn’t want to draw attention to himself, to the point that he declined to be pictured in this feature.  “I don’t like any attention on myself. I prefer to work in the background and place the focus on these amazing saints,” he says.

Every saint on their own path

Asked for his favourite saint from those who feature in the project, Ambrose can’t decide. “It is hard to choose, because all these stories are inspiring in their own way. Every saint follows his or her own path with the Lord. Every saint teaches us that you can go to heaven, if you cooperate with God’s grace. From black saints we can learn that to get there, it doesn’t matter where you come from. Maybe it’s harder if you have to be a slave in America first or become a martyr in Africa. But God gives us all the grace that is needed to become a saint, even if you don’t come from a privileged continent. I hope that can give motivation and confidence.”

The plan is that the graphic novel will have two volumes, with each around 25 stories. And maybe the project will grow into something more than the graphic novel alone, Ambrose says. “I started with the portraits, and soon I received many requests, not only to pre-order the book but also for prints, prayer cards and multimedia stuff. Who knows what will be possible?”

He adds: “Hopefully, the project will be sort of an emancipation movement; that Catholics will see how great the diversity is in our Church, which is a reason for celebration, not discrimination.”

View more portraits of black saints by Ambrose Jozefzoon at www.blacksaintsmatter.wordpress.com or on Instagram at @BlackSaintsMatter