Work, prayer-life balance: Even a cardinal must find a way 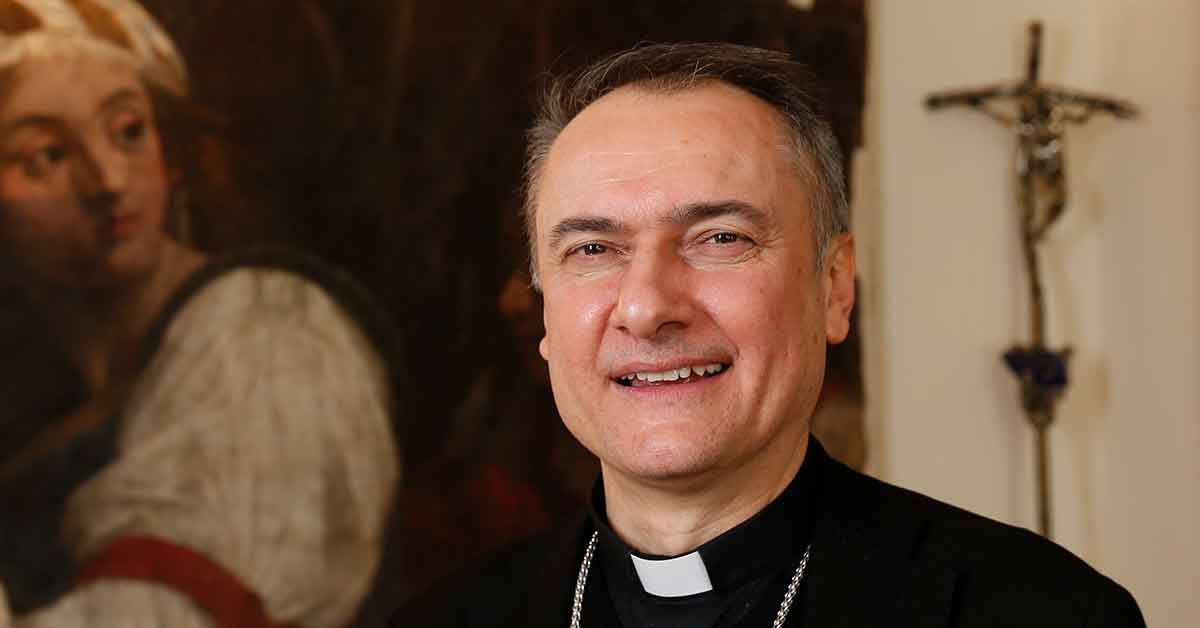 Cardinal Mauro Gambetti, archpriest of St Peter’s Basilica, is pictured near his office at the Vatican Jan. 24, 2022. Cardinal Gambetti, who is responsible for the basilica, has a degree in mechanical engineering that helps him in his work. (CNS photo/Paul Haring)

By Cindy Wooden  –  Cardinal Mauro Gambetti said earning a degree in mechanical engineering helped him learn that order and precision could be part of creativity, even though he is still, in his words, “a lover of improvisation and spontaneity”.

The 56-year-old cardinal is archpriest of the Basilica of St Peter, president of the Fabbrica di San Pietro, which is responsible for the basilica’s upkeep, and the papal vicar for Vatican City State.

His engineering background helps him understand some of the technical details his current work entails, like the strengthening and restoration of the basilica’s dome, a project that began in 2019 and should be completed by early summer. And his working experience in his father’s machinery company gave him an understanding of organisational dynamics and “optimising” resources, more skills he needs today, he said.

A member of the Conventual Franciscans, he was custos of the Sacred Convent of St. Francis in Assisi when Pope Francis announced in October 2020 that he was making him a cardinal.

During an interview Jan. 24 in the Fabbrica office, Cardinal Gambetti used biblical images to describe the two great buildings.

The Basilica of St. Francis, he said, is the “city on a hill,” and not just literally. “It is a point of reference for travellers, for pilgrims, for seekers.”

St. Peter’s Basilica is the “light on the lampstand” from Matthew 5:15, he said, a reflection of Christ, “the light of nations,” which is the opening phrase of the Second Vatican Council’s Dogmatic Constitution on the Church.

The church, sharing the light of faith in Christ, he said, is called to “scatter the darkness of sin, of a lack of meaning, that exists in the world.”

Cardinal Gambetti, one of only five cardinals still in their 50s, also points to Vatican II when explaining a controversy that was bubbling in the basilica when he arrived in Rome to take up his new jobs: the Vatican Secretariat of State had issued a notice ending the practice of dozens of priests almost simultaneously celebrating private Masses at altars throughout the basilica every morning. Instead, priests were invited to concelebrate one of the Masses held every half hour from 7 a.m. to 9 a.m.

“The situation is more orderly now, also thanks to a clarification that there was no deprivation of any right or possibility to carry out a sacred action, but rather a desire to make the sacredness of the liturgy shine brighter,” he said.

Pilgrims arriving with a priest still can have their own Mass in the basilica, the cardinal said.

But the private, individual Masses that were being celebrated simultaneously – something that was common before Vatican II – have given way to the concelebrations with several priests and a congregation of laity in accordance with the teachings of the council and its liturgical reform, he said. It emphasises, as Vatican II did, that “liturgical services are not private functions, but are celebrations of the church, which is the ‘sacrament of unity.'”

Of course, St. Peter’s Basilica is filled with places that almost trigger private prayer. Cardinal Gambetti said that for him, those places are the chapel where Michelangelo’s Pietà stands, the Blessed Sacrament Chapel where silent adoration takes place throughout the day and the tomb of St. Peter.

“Another thing that really strikes me about this church is that when you enter, you face this majestic vastness” that draws one’s eye to the altar over St. Peter’s tomb and to the Holy Spirit window behind it, he said. “You perceive this sense of the sacred, the divine that breaks through, that enters history in the midst of the city.”

Obviously, he said, it is “easier to find space for silence and contemplation” in a small hilltop town like Assisi than in the chaos of a city like Rome. And he does miss his Franciscan confreres, “a confraternity that looks after the person and safeguards times for prayer and contemplation and meditation. In other words, it’s a completely different set up.”

But, noting that Jan. 24 was the feast of St Francis de Sales, he cited the saint’s admonition that each person is called to live a life of faith and devotion according to his or her own vocation and responsibilities; it makes no sense “for a working man to spend his whole day in church like a religious,” the saint wrote.

Having three job titles, each of which includes a long list of tasks and a large staff, obviously required great change, he said. “My time and energy are almost completely devoted to directing all this activity, but at the same time, it’s almost like I am doing it in my free time. It absorbs most of my material time, but inside myself I feel like it’s just the time left over.”

The time that really counts, he said, “is tied to that priestly heart that God gave me” and still is exercised as a Franciscan, but now also as a bishop and cardinal.

“This gives substance to my life,” the cardinal said. “All the work I do makes sense only because of that.”