Did you know THIS about Pope Francis? 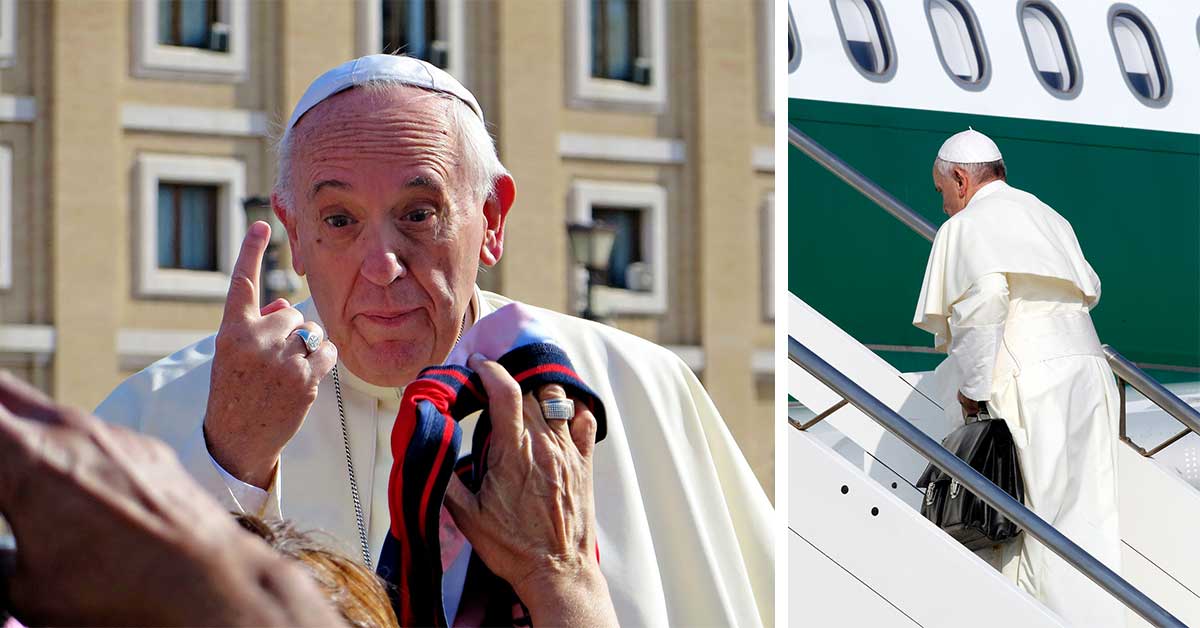 (Left) We are No.1, Pope Francis signals to fans of his favourite football club, San Lorenzo, during a general audience in 2015. (Photo: Günther Simmermacher).  (Right) The pope carries his own bag as he boards a flight in 2014. (CNS photo/Giampiero Sposito, Reuters)

Cardinal Jorge Mario Bergoglio was elected as Pope Francis on March 13, 2013 — but he might have been pope already in 2005, when the conclave chose Pope John Paul II’s successor. That year, he finished second to Cardinal Joseph Ratzinger, who took the name Benedict XVI. As Pope Francis turns 85 on December 17, here are some facts about him you might not know.

Whatever papal name Cardinal Bergoglio might have had in mind in case he’d be elected went out of the Sistine Chapel’s window the moment he actually became pope. During the conclave he sat next to Brazilian Cardinal Claudio Hummes, a Franciscan, who congratulated his Argentine friend  with the advice: “Don’t forget the poor.” Immediately, Bergoglio had the idea of taking the name Francis, after the saint of Assisi. He was the first ever pope to take that name.

Pope Francis was born as Jorge Mario Bergoglio, the eldest of the five children of Mario José Bergoglio, an accountant, and Regina Maria Sivori. Both parents had emigrated to Argentina in 1929 from the northern Italian region of Piedmont to escape Mussolini’s fascist regime. His father died in 1959 at the age of 51, his mother in 1981 at 70. 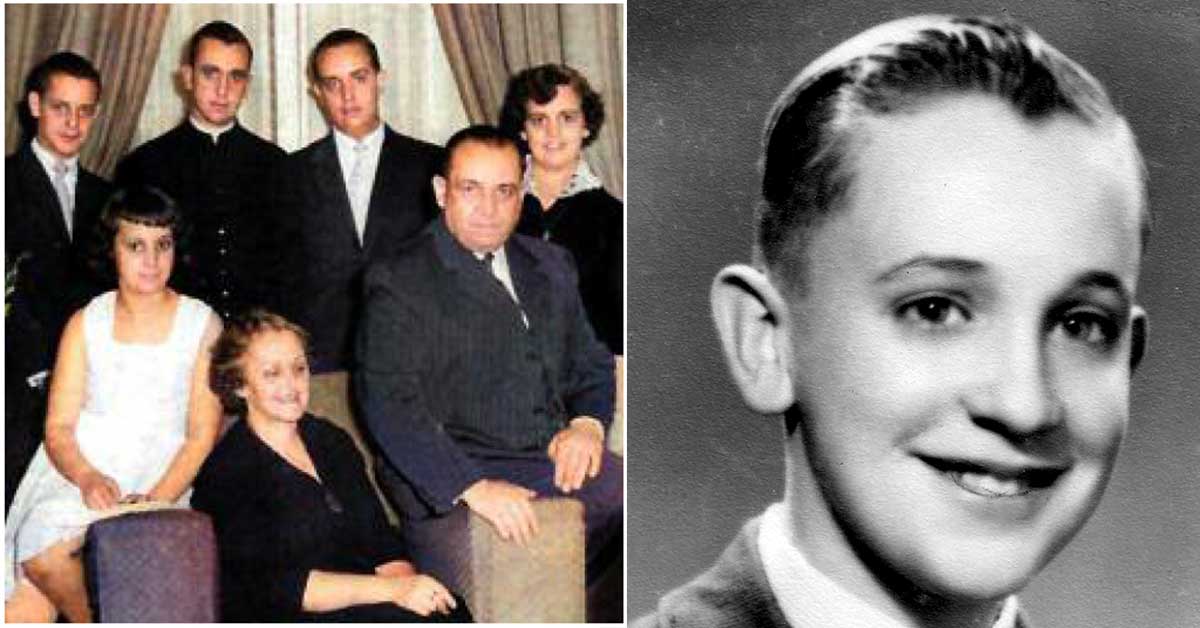 From left: Colourised photo of the Bergoglio family, with the future Pope Francis as a newly-ordained priest second from left at back • The young Jorge Mario Bergoglio as a boy (CNS photo/Clarin handout via Reuters)

Pope Francis is 1,75m tall. At the age of 21, part of his lung was removed when he had life-threatening pneumonia and developed three cysts. It is known that Pope Francis suffers from sciatica (a nerve condition that causes back, hip and leg pain), and this year he had a large portion of his colon removed because of an intestinal narrowing. He has credited an alert nurse for saving his life by urging him to see a doctor.

He is also open to alternative medicine. In 2004, Bergoglio had treatment with a Taoist monk whose sessions of massage and acupuncture helped the cardinal overcome symptoms of diabetes and gall-bladder problems.

Pope Francis speaks his native Spanish and Italian, as well as the Piedmontese dialect of his parents and Latin. He can converse in Brazilian Portuguese, and has basic knowledge of German, French and English. Of these, the pope says, he struggles most with English, especially the pronunciation. He learned his German while living in Frankfurt in 1986 to work on his unfinished doctoral thesis.

Pope Francis has admitted that he has a quick temper and is said to be familiar with strong language. He also acknowledges that he can be authoritarian — which is pretty much in the job description for popes.

As a teenager, Bergoglio had a girlfriend, Amalia Damante, who used to affectionately call him “a little devil”. After her childhood sweetheart became pope, she recalled that he once declared: “If I can’t marry you, I’ll become a priest.” Thank you, Ms Damante, for not marrying our Holy Father.

For a while, Bergoglio worked as a chemical technician in the foods section of a laboratory. Other jobs on his CV include janitor and nightclub bouncer. But he dropped all these career options to become a Jesuit priest.

Pope Francis is a keen football fan, and his favourite team is Argentinian side San Lorenzo. One might have expected him to support Boca Juniors or River Plate, the Buenos Aires equivalents of Pirates and Chiefs. Why San Lorenzo? Perhaps because the club was founded by a priest, Fr Lorenzo Massa, and named after St Lawrence. And they were underdogs, and we know that the pope champions the little guys.

A few months after the election of Pope Francis in 2013, San Lorenzo won the national championship, only one year after narrowly avoiding relegation. In 2014, the club won the Copa Libertadores, South America’s premier club competition. Coincidence?

He also has a club named after him: Club Deportivo Papa Francisco, a semi-professional football club founded in 2013 and based in San Francisco Solano, near Buenos Aires. 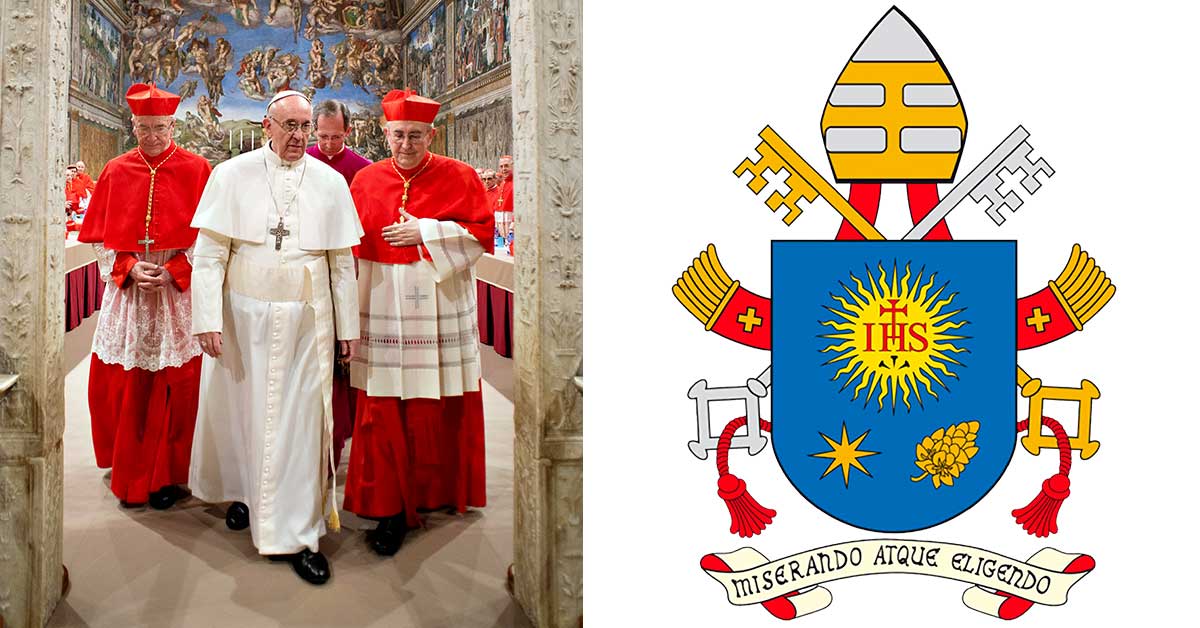 Pope Francis never watches TV to relax. He switches it on only when there is an important news event. He turned off his TV on June 15, 1990, when he made a promise to the Virgin Mary to abstain from the gogglebox.

Pope Francis has what he calls “an intense love” for Argentina’s famous dance, the seductive tango. He used to dance the tango as a young man. He also likes the classical music of Wolfgang Amadeus Mozart and Johann Sebastian Bach, and the traditional music of Argentina and Uruguay.

Pope Francis enjoys a good pizza. In 2017, he celebrated his birthday with a metre-long pizza (which he shared!), and in Naples had one delivered to the popemobile. He also loves ice-cream. The Vatican Cookbook, published in 2016, noted that the Holy Father also has Argentinian favourites: empanadas (a filled pastry), sirloin steak, and dulce de leche (a caramelised milk desert).

Pope Francis isn’t known to play the air guitar to rock music, but he does have a rock CD out in his name. Released in 2015 and titled Wake Up!, it is progressive rock music set to papal speeches from 2013-14.

And what do Mick Jagger, Jimi Hendrix, Madonna, Tupac Shakur, Lady Gaga, Bruno Mars and Pope Francis have in common? They’ve all appeared on the cover of Rolling Stone magazine (the pope on February 13, 2014).

What’s in the bag?

Pope Francis made headlines in March 2014 when he carried his own briefcase on his way to taking a flight. Popes have not been known to carry their own stuff. And what is in the black satchel? We know of two things: apart from his breviary, he carries a razor — after all, even a pope must shave.