Peace Be with You!: Second Sunday of Easter 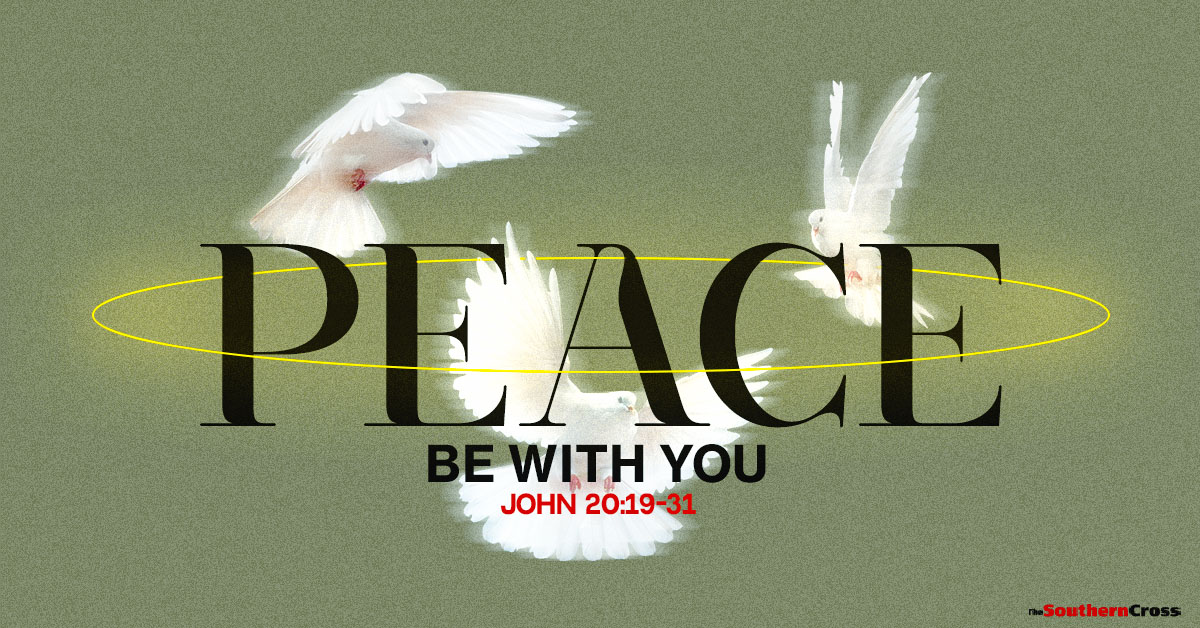 Theme: Peace Be with You! A Call to Continue the Mission of the Lord! Divine Mercy!

Sermon (Reflection): First, we thank God our Father for sending his Son into the world, and for allowing us to conduct the mission which he entrusted to his Son. This shows the divine mercy of God that we are given the mission. The same mission of continuing God’s saving work is given now to us. The first word in today´s Gospel narration is ‘Peace’. Why peace? What disturbs and hinders the proclamation of the Word of God is the absence of peace. Even today, we cannot talk about evangelization if there is no peace.

The Gospel passage of today narrates two appearances of the Risen Jesus to his disciples, to send them on a mission that will be a continuation of his own. Jesus first appeared to them with the greeting of peace. By announcing peace and then showing the disciples the signs of his passion, Jesus attested to his victory over death and confirmed that he has truly risen. He then commissioned them stating, “as the Father has sent me, I am sending you.” Thus, the disciples were to continue the mission of Jesus which he had received from the Father. But what aspect of Jesus’ complex mission were they to continue?

Firstly, the chief purpose of Jesus’ mission was to reveal the Father to the world (Cf. John 1:18). He came manifesting God in and through himself, as is best summarized in his statement, “whoever sees me sees him who sent me” (Cf. John 12:45). Therefore, the disciples were commissioned to continue with the mission of revealing God to the world through their words and their lives, following Jesus’ guidance.

Secondly, Jesus came to “take away the sin of the world” (Cf. John 1:29). Like him, the disciples were to forgive or to retain sins, which implies having authority over sin. Sin separates people from God, and one another, and the greatest sin in this Gospel is the lack of faith. By pointing out sin and calling for repentance the disciples will bring people to God, thus “removing” sin. However, those who refuse to respond to their message will have their sins “retained.” Because they refuse to repent and believe, their sin cannot be forgiven as they do not ask for forgiveness.

Thirdly, Jesus came to give life to the world (Cf. John 6:40). The disciples are entrusted with the same mission. This is revealed when Jesus appeared to them for the second time, especially for the sake of Thomas. This disciple was not present during Jesus’ first appearance and refused to believe in the resurrection unless offered physical proof of it. Jesus gave him that proof, and Thomas believed.

However, the real point of this appearance is made when Jesus blesses those who, unlike Thomas, did not have a personal encounter with the Risen Jesus but still believed. Their faith would have to be based on the testimony of Thomas and the others.

Jesus refers here to the future generations of Christians whose faith, based on the apostolic testimony, would be even greater than that of Thomas. The connection between faith and life is highlighted in the final lines of this Gospel reading, where Jesus announces that faith in him brings life. Thus, the disciples’ task of bringing people to faith in Jesus equals bringing them to life.

The first reading from the book of Acts contains one of Luke’s summary presentations of the life of the community of first believers. Right from the start, Luke draws a parallel between the Apostles and Jesus. He begins by stating that, just like Jesus, the apostles did many signs and wonders. This miracle-working activity served to give credibility to their proclamation of Jesus. The crowd’s reaction to these signs parallels the response to Jesus’ miracles. Most people were amazed but did not join the community, while others respond positively and become believers.

Peter uses Jesus’ power to make his message of the resurrection and the call for conversion credible and effective. Soon, like Jesus, Peter and other apostles will be arrested and brought before the same council that condemned Jesus to death (Cf. Acts 5:17-42). Still, nothing can now stop the growth of this new faith empowered by Jesus working through his successors. Hence, the need to give them peace, peace be with you.

The second reading of Easter Sundays comes from the book of Revelation. This book was written in a literary style known as “apocalypse”. The apocalyptic writings use dramatic visions and highly symbolic language to communicate the message. Today’s reading serves as an introduction to the visions which will fill the rest of the book. The visionary was a persecuted Christian named John, who was sent into exile on a small island in the Mediterranean Sea because of his testimony to Jesus. In his first vision, John saw Jesus who appeared to him as a splendid heavenly figure, the glorious Son of Man standing in the heavenly temple. Jesus introduced himself as the one who was dead and is now alive forever and ever, referring to his death and resurrection.

His resurrection gave him “the keys of Death and of Hades”, which implies authority over the power of death. However, the chief purpose of this vision was to commission John as Jesus’ messenger. Twice John was commanded to write a message from Jesus to the seven Christian Churches which needed guidance and correction. This was his initial task. Sent by the Father, Jesus came into the world with the message of salvation. John was to play a similar role, delivering Jesus’ message so that his salvific work among the Churches may continue. Hence, the Apostles needed peace,

Jesus is also giving us peace today, Peace be with us in our hearts.

Christian Act in Word of God “my role model is peace of Christ!”

Jesus Christ must be our role model of peace. The first reading shows us the apostles doing many signs and wonders, acting in the same manner as Jesus did. Their proclamation of Jesus as Lord and Saviour was supported by miracles. We notice that they acted in the name of Jesus because they took him as their role model. Just like the apostles, we also have people to whom we look up. We often try to imitate the people who impress us, to do the same kind of things they do or wear the same kind of fashion they wear. These role models may be film stars, influential politicians or world leaders, musicians, technological gurus, or others. Good as they may be, we also need to ask whether emulating such people helps our faith to grow and whether it makes us better persons.

Jesus revealed God to us because he was united with the Father and copied God in all he did. The apostles emulated Jesus by calling others to faith in God and conversion. We are challenged to choose our role models carefully.

The mission of imitating Christ in our life circumstances is not going to be easy. It is going to be marked by opposition and even hostility. This was the experience of the early Christians, as the second reading from the book of Revelation clearly shows. Just as the early Christians were criticized, so people are going to criticise and misunderstand us. Jesus never tired of doing his mission of showing the world the compassionate face of God. Hence, in our mission today as Christians, we need peace, peace in our hearts, peace in our families and peace in the societies we are living in.

Action: I will be peaceful from today onwards

Prayer: God our Father, we thank you for sending Your beloved Son to be our redeemer and for showing to us your compassionate face. Today in the Gospel, He has given us peace ‘peace be with you’. May we be peaceful people in our families and in the societies we live in. Help us to continue his saving work in our world, so that we can be truly your servants and his disciples. We ask this through Christ our Lord. Amen.