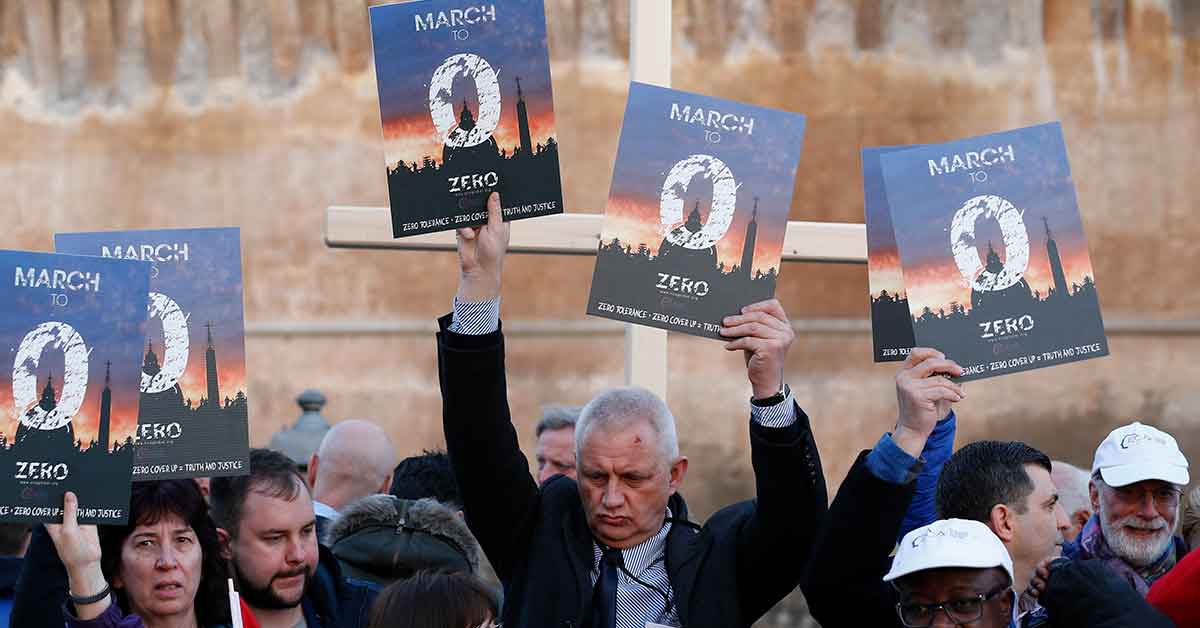 Clerical sex abuse survivors and their supporters rally outside Castel Sant’Angelo in Rome in this Feb. 21, 2019, file photo. The Vatican wrapped up its investigation and dismissed accusations of negligence by Polish Cardinal Stanislaw Dziwisz in allegedly covering up cases of clergy sex abuse of minors. (CNS photo/Paul Haring)

By Carol Glatz – The Vatican has wrapped up its own investigation and dismissed allegations that Polish Cardinal Stanislaw Dziwisz had covered up cases of the sexual abuse of minors by clergy in his archdiocese.

In a written statement released April 22, the Apostolic Nunciature in Poland said the Vatican found the cardinal had been “correct” in his actions after it examined the findings of an investigation led by Italian Cardinal Angelo Bagnasco.

Following a request by the Vatican, Cardinal Bagnasco, the retired archbishop of Genoa, was in Poland June 17-26, 2021, “to verify certain cases related to the actions of Cardinal Stanislaw Dziwisz” while he was archbishop of Krakow from 2005 until his retirement in 2016, the statement said.

“The analysis of the collected documentation made it possible to assess these actions of Cardinal Stanislaw Dziwisz as correct and, therefore, the Holy See decided not to proceed any further,” it said.

In his own written statement released the same day, Cardinal Dziwisz said, “I would like to express my gratitude to all those who have contributed to a responsible response to the allegations made against me” and gratitude to the Vatican “for having judged the case fairly.”

Cardinal Bagnasco “made every effort to clarify the aforementioned allegations, which are undeserved and painful for me,” said the Polish cardinal, who turns 83 April 27.

He said he hoped the announcement from the nunciature would “contribute not only to clarifying the matter but also to restoring peace of mind to all those who have felt affected by the accusations I have faced.”

Cardinal Dziwisz, who served as St. John Paul II’s personal secretary for 39 years before leading the Krakow Archdiocese, was accused in a November 2020 TVN-24 documentary of ignoring abuse complaints after becoming archbishop in 2005.

The cardinal dismissed the claims in a TV interview, citing his four decades of “service to the church, pope and Poland,” but said he counted on a “transparent investigation” and “proper presentation of the facts.”

In a January 2021 statement, the Krakow prosecutor’s office said it had found no “evidence of criminal activity” against Cardinal Dziwisz, since the legal obligation to report abuse allegations to police had only entered into force in 2017. The cardinal retired as archbishop of Krakow in December 2016.

Following Pope Francis’ May 2019 motu proprio, “Vos Estis Lux Mundi,” revising and clarifying norms and procedures for holding bishops and religious superiors accountable for protecting abusers, 10 mostly retired bishops have been sanctioned by the Vatican for ignoring abuse complaints in Poland, where allegations of past cover-ups have been surfacing.

In 2013, the bishops’ conference appointed a child protection coordinator and established a foundation for prevention and victim support.