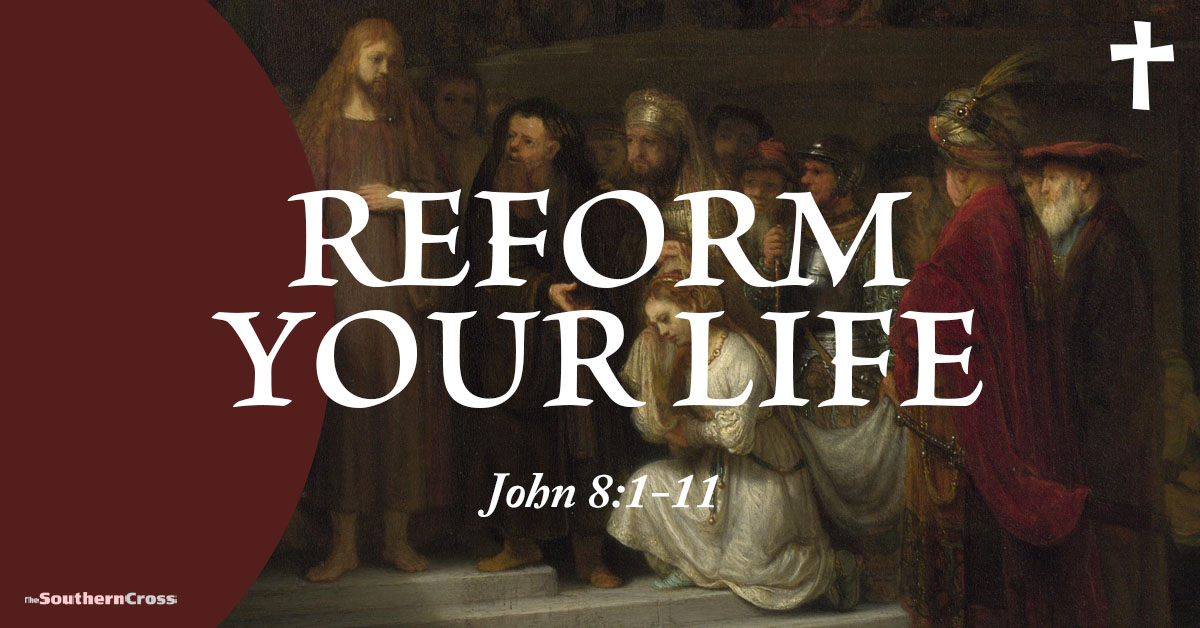 Theme: Reform your Life: If you have never sinned be the first to stone!

Point of Reflection: What is my understanding of the justice of God in relation to his mercy? Do I despise people on account of some wrongdoing on their part?

Do I have a holier-than-thou attitude in relation to others? The Scriptural readings of today are inviting us to reform our lives not just judge others and that we need to be compassionate and merciful.

Sermon (Reflection): The Gospel passage of today contains the well-known story of the woman caught in adultery. My first question is, where is the man? Was she doing the act alone? Jewish culture is the answer. Nevertheless, the main reason the scribes and the Pharisees brought the woman before Jesus was to ask Jesus pass a judgement which was a trap for his authority and a confrontation with the existing Mosaic Law. The Mosaic Law by that time called for the death penalty for both the man and the woman who committed such a transgression (Cf. Leviticus 20:10; Deuteronomy 22:22-24). This, of course, raised a question about the absence of the man who must have been caught together with the woman. His absence already suggests that the leaders’ motifs in bringing this case before Jesus were insincere and a trap for Jesus. In one way or another, in our Christian life, we have also been trapped either by our closest friends or relatives who know us better. But what is our response to such traps we encounter in our Christian life? Jesus is the answer today.

What was the trap for Jesus? The civil leaders wanted a verdict from Jesus: If he agrees with the Law of Moses and calls for the stoning of the woman, the leaders would have a reason to accuse him before the Roman authorities who had the exclusive right to pass a death sentence.

If Jesus sets the woman free, then they would accuse him of violating the Law of Moses. Jesus was trapped.

Jesus found his way out of this trap by refusing to pass judgment. First, he bent down and silently wrote with his fingers on the ground, simply ignoring the challenge of the leaders. Remember the Law of Moses is believed to have been written by the finger of God and Jesus is using the finger writing on the ground. This symbolises the writing of new law as Jesus is God. Some theologians suggest that he began to write down the sins of the leaders, this suggestion is unlikely to be true because they continued to press him for an answer. Jesus finally responded by challenging the accusers to begin the stoning, with the first stone to be thrown by a sinless one among them.

Saying this, Jesus brilliantly turned the accusers into the accused: he put them on trial! Now, one of them would have to declare himself publicly to be free from any violation of God’s laws by casting that first stone. This would make him subject to the scrutiny of the others, and none of them felt confident to make a public claim to sinlessness. The accusers thus began to slip away one by one. Left alone with the woman, Jesus first asked about those who wanted to condemn her.

Since no one cast that first stone, it implied that they all silently acknowledged themselves to be sinners just like her. Jesus did not condemn her either but called her to reform her life and sin no more. This should be our Christian calling during this Lenten season to reform ourselves from our sins.

However, this story builds a striking contrast between two ways of using religious authority. The leaders used their authority following the letter of their religious law to destroy life. Today too as spiritual or civil leaders, are we not using our authority to destroy other people’s life? Taking advantage of the woman’s sin they attempted to trap Jesus and to end her life also.

If they truly sought justice, they would have brought her partner in sin to judgment also.

Jesus used his religious authority in an opposite manner. Choosing mercy and compassion over the law, he gave the woman a chance for a new life. His use of religious authority was compassion-based and life-giving, while the leaders’ approach was legalistic and life-extinguishing. In our Christian life let us emulate the example of Jesus to always choose compassion and mercy.

Summing up today’s liturgical readings, we can elucidate three important shifts and differences in the understanding of religious concepts and the use of religious authority. In the first reading(Cf. Isaiah 43:16–21), Isaiah taught the Israelites that God’s salvation will no longer mean the destruction of enemies but a life-giving transformation and restoration of the world and humanity, on a cosmic scale. In the second reading (Cf. Philippians 3:8–14), St Paul realized that righteousness before God does not come through following a complex set of rules and regulations but through a union with Jesus Christ. Jesus challenged the legalistic and dishonest use of religious authority by some of the leaders of his day. He used compassion and forgiveness to give the sinful woman an opportunity for a new life, thus teaching that religious authority must be used for life-giving purposes. Those who comprehend and experience the newness of God’s ways as revealed in today’s readings can declare confidently with the Psalmist, “the Lord has done great things for us, and we rejoiced.”

Christian Act in Word of God “Go and sin no more: Reform your Life!”

When the Pharisees brought before Jesus a woman alleged to have been caught in adultery, they were not seeking legal advice, because they knew already what the law says. The question of the Pharisees was therefore a trap meant to test the character of Jesus and hopefully to incriminate him. Jesus’ response tampered with the whole justice system of his day, “Let anyone among you who is without sin be the first to throw a stone at her”. Here, one can think of the saying, “If you live in a glasshouse, do not throw stones.”

Our image of God has a direct effect on our spirituality. An image of a vengeful God evokes fear and panic, while an image of a loving God instils peace and calmness. In the person of Christ, we have an image of God who loves not only the righteous but also the sinner.

Often an incentive for more wrongdoing is the feeling of rejection. When a person is made to believe that he (she) is good-for-nothing, it engenders further wrongdoing. On the contrary, when a person is led to the truth that he/she is lovable despite a sin committed, there is often a surge of inner strength to overcome wrongdoing.

Who stoned St Benedict Daswa? Are we not stoning others today with our actions and words. Even in the 21st century, there are times when people take the law into their own hands and lynch others for an alleged crime, forgetting that humans as we are, are all vulnerable in many ways. Every sinner, like any other human being, has been created in the image and likeness of God. Sin clouds that image but does not take it away. To seek to destroy sin by inflicting pain on a person is to distort the image of God.

Many of the great women and men who are positively changing our world today could have been stoned to death at one point or another in their journey of life, but they persevered, following the example of Jesus who chose to love rather than to condemn us. To move from hate to love, or, better, to love despite the hate, is a mark of a person who has undergone a great shift in perception of how interpersonal relationships ought to work. This shift follows exactly what Jesus taught and what he expects from his followers. He not only taught it, but he also lived it, as today’s Gospel plainly shows.

Action: I will reform my life and will be compassionate and merciful.

Prayer:  Eternal Father, reform my life so that I should not be living in sin as you told the woman caught in adultery in today´s Gospel to reform her life, and as your Son Jesus Christ told the religious and civil authorities of that time, to be compassionate and merciful not just judgemental. Help us to be compassionate and merciful towards each other as we reform our lives, we ask this through Christ our Lord, Amen.