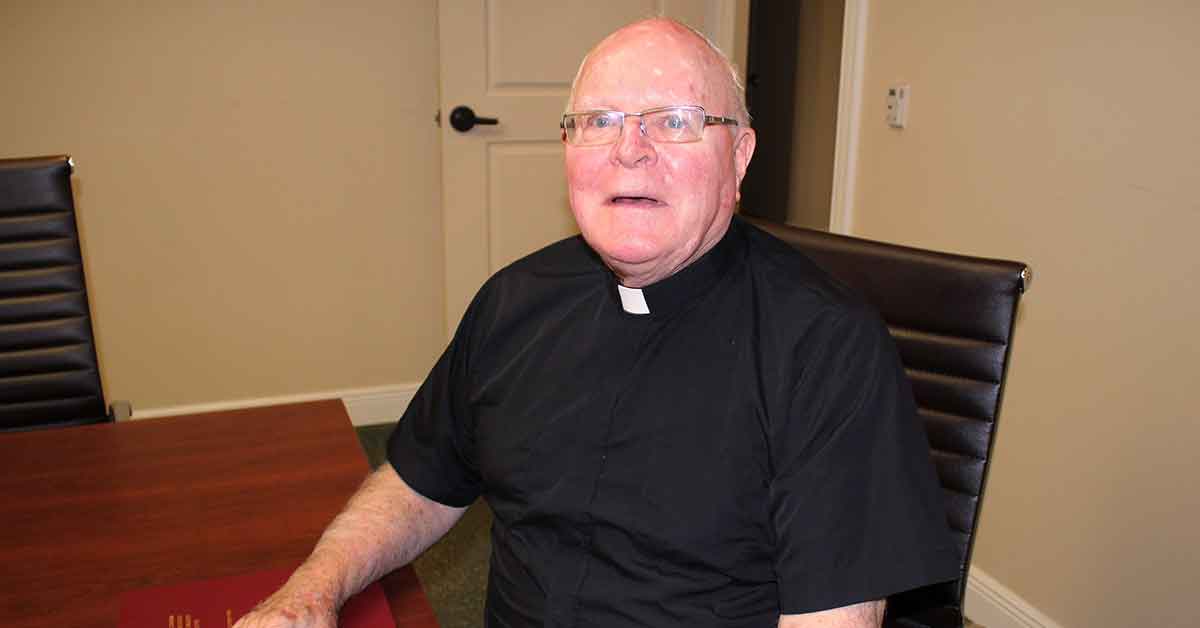 By Linda Reeves – When Carmelite Father Michael Driscoll was a young man 50 years ago, he started reading and collecting articles about Father Titus Brandsma, one of Netherlands’ leading churchmen.

A priest who had personally known Father Brandsma, also a Carmelite, told the young Father Driscoll how the Dutch priest loved to preach and to write and that he had been an editor and journalist for a Catholic newspaper.

During World War II, however, Father Brandsma was imprisoned for speaking out against the Nazi movement, and died in 1942 in the infamous Dachau concentration camp.

Father Driscoll received a relic of Father Brandsma and cherished it, especially during a critical time in his life. In 2004, Father Driscoll was diagnosed with advanced-stage cancer. His prayerful response led him to hold the beloved relic and send up an intercessory prayer to Blessed Titus Brandsma, who was beatified in 1985 by St. John Paul II as a martyr of the faith.

“I prayed (for his help) and said I was determined to fight,” said Father Driscoll, 80. “I put the relic up to my head, and told Titus to take care of me.”

Eighteen years later, Father Driscoll credits the intercession of his fellow Carmelite for his good health: He has managed to remain healthy for nearly two decades.

In thanksgiving, Father Driscoll will attend the canonisation of Blessed Titus Brandsma May 15 at the Vatican.

While Father Driscoll believes without a doubt that his prayers were answered, his journey to healing has not been easy.

He has undergone an 11-hour surgery and 35 radiation treatments to stop the melanoma, which had spread from his head to his neck, lymph nodes and salivary glands. Even though his doctors were painfully honest in telling him that the cancer could come back, and that in most cases patients with his illness die within five to 10 years, he has beaten the odds. His cancer is in remission.

“We were all praying for him,” said Barbara Batchelder, a parishioner of St. Jude Parish in Boca Raton, where Father Driscoll resides and continues to minister. “It was touch and go for him. We all came together in prayer as a community.”

Father Driscoll’s story was at the centre of a six-year investigation of Blessed Brandsma’s sainthood cause. Vatican officials declared his unexplained healing a miracle, attributing it to Blessed Brandsma.

In general, two miracles attributed to the intercession of a sainthood candidate are needed for beatification and canonization. Martyrs need only one such verified miracle to be declared a saint.

About 60 of Father Driscoll’s prayer warriors from Ireland, Massachusetts, Washington, D.C., Florida and New York will join him at the ceremonies.

Father Driscoll attended Catholic school and grew up at Sacred Heart Parish in the Bronx, a borough of New York City. As a teenager he attended the Carmelite Minor Seminary in Middletown, New York, known for academic excellence and its spiritual formation programs for boys.

Father Driscoll said he admired the Carmelites practice of prayer, community and service, and their excellent teaching and preaching skills.

“They were good examples,” he recalled in an interview with the Florida Catholic, a media outlet that serves several Florida dioceses.

He soon realised that God was calling him to the Carmelite way of life and he was ready to respond. After high school, Father Driscoll joined the Carmelites’ North American Province of St. Elias to begin formation. He was ordained June 3, 1967.

His assignments have included teaching, pastoral and administrative ministries in New York, Washington and Florida, where he arrived in the later 1970s. He was pastor of St. Jude Parish from 1992 until he retired 10 years ago.

In his golden years, he continues to serve both St. Jude and St. Joan of Arc parishes in Boca Raton, assisting where needed and living in the spirit of the Carmelite order. He said he has continued to deepen his relationship with Jesus over the years through his journey after his diagnosis and surgery.

Today, Father Driscoll has a treasure trove of articles, pictures, books and facts on the famous Carmelite known as a model of the religious order. His story has inspired men to discern and answer the call to the priesthood.

“Some people said that Titus needed to be canonised so the Carmelites started praying for his canonisation,” Father Driscoll said. “He was zealous. He was brave. He didn’t believe in political correctness. He told it like it is. He advocated for the Catholic Church, for freedom of the press, for schools, for an end to the persecution of the Jews.”

Father Driscoll’s miracle has been front and centre at St. Jude Parish, which established a chapel dedicated to Carmelite martyrs including the soon-to-be St. Brandsma. The chapel with a large icon of him is designed to promote devotion and to shine a light on Carmelite spirituality: compassion, peacemaking and forgiveness. The chapel also is a place to pray for healing, especially from cancer.

Father Driscoll continues to pray, keep his relic close at hand, and is ready for whatever God has in store for him.