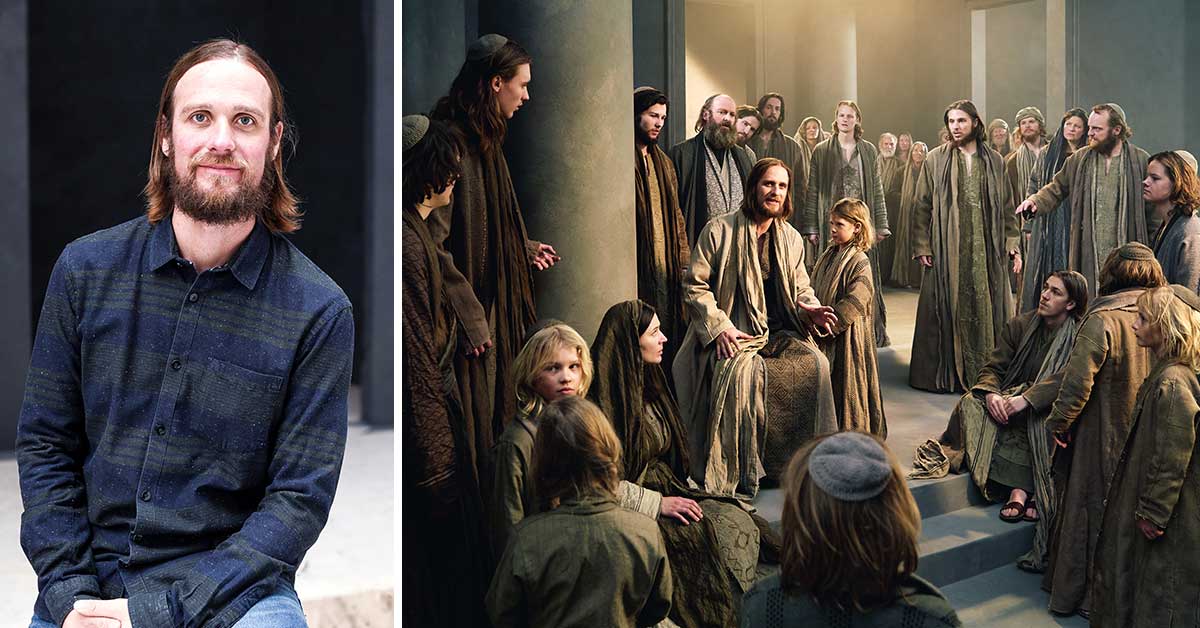 On May 14, the famous Oberammergau Passion Play begins its 2022 season. Günther Simmermacher spoke to one of the two actors playing the role of Jesus.

Next time Jesus would like to be a villain. That is a future role which one of the two actors who are portraying Christ in the Oberammergau Passion Play in Germany would be interested in playing.

Frederik Mayet will play Jesus for a second time when the world-famous Passion Play begins its 2022 season on May 14. The play will run five days every week until October 2, during which 41-year-old Mayet will alternate in the role of Jesus with 25-year-old Rochus Rückel.

The Passion Play, whose history goes back to 1634 [See our article on the history of the Oberammergau Passion Play], is normally staged only every ten years. The current production was originally planned to be performed in 2020, but due to Covid lockdowns it was postponed to 2022. Only natives or long-term residents of the picturesque village in the Bavarian Alps, about 90km south-west from Munich, may act in the play.

Mayet, who was born in Oberammergau (population 5,400), will be taking part for the third time. In 2010 he played Jesus for the first time; in 2000 he portrayed the disciple St John.

In an interview with The Southern Cross by video conference from Oberammergau, the father of two said that the role of Jesus is demanding.

“Physically, the scenes with the scourging and the Way of the Cross, and hanging on the cross for 20 minutes, are quite exhausting,” he said. It is necessary to find distance from the role off-stage, he noted. “It’s important at the end of the evening to leave that role behind, and chat with friends about football or whatever over a beer. In the context of acting in the play, one shouldn’t over-identify with Jesus, but see it as a role which one tries to interpret as well as possible.”

Mayet said that one grows into that role. “You try to just play your part well and do it justice, because you know there are people coming from all over the world to see the play. So that gives you a ‘positive stress’ which carries you. I concentrate on playing my role well, and on speaking clearly.”

To get the role of Jesus, “you must have some acting talent, and a good voice. There’s also the physical appearance — to play Jesus, you must have a certain look, and be of the right age, between your mid-20s and early-40s. I’m now 41,” Mayet said.

Since almost all cast members are amateur actors, it might have helped that Mayet has a professional theatre background — he is an art director and media officer at the Münchner Volkstheater in Munich. “But we also perform stage plays in years in Oberammergau when there are no Passion Plays, so people get to know one another, and the director gets a sense of who is capable of what.”

Every role is cast with two actors, who perform on alternate days. Initially there may be some disappointments with the casting decisions, Mayet said. “Where people come together, there’ll always be human emotions. Of course, when the roles are shared out, there’ll be some who would have preferred to get another part, and others are surprised that they get bigger roles than they had expected. So one could say that before the work of the play begins, there might be a few quarrels.”

Yet these differences soon make way for unity in purpose. “When it comes to the time when we prepare for the play and perform it, everybody sticks together. It’s the Passion year, and everybody puts their differences to one side in order to concentrate on the common goal: to stage a great Passion Play,” Mayet said.

Many friendships are built in that process, also across generations, he noted. “The youngest of our actors is eight years old, and the oldest is 80. People across the generations are sitting together, get to know one another, and share in a mutual experience. That is precious.”

While the parts were already cast in 2019 in anticipation for the postponed 2020 Play, rehearsals for this year’s run begun in January. For the 2,100 people who take part in the Passion Play, as cast members, crew or chorus, the event requires a lot of individual sacrifices, in the private and professional areas of life.

“One certainly takes on a lot, but you do it all with passion, and with pride in being allowed to be part of this,” Mayet said. “Everybody has a day-job, so rehearsals take place in the evenings or on weekends. Many people take leave or work short hours during the Passion Play season between May and October.”

He said that it used to be easier in the past, when almost all cast and crew lived and worked in or around Oberammergau, where everybody understood the culture and needs of the Passion Play. However, now some participants work as far off as Munich, where employers may not understand the Passion Play culture. Mayet himself lives with his family in Oberammergau but commutes frequently to Munich.

Scheduling changes have helped to reconcile professional demands with those of the Passion Play, Mayet said. In the past, “the first half of the play was performed before noon, and the second in the afternoon. Now the first part is in the afternoon, and the second in the evening. That enables people to work half-day. And some parts, such as the Romans, are required to be on stage only in the evening sessions. So during casting people can say that they’d like an afternoon or an evening role, and that enables them to make the necessary arrangements,” he said.

Mayet has to be on stage two or three times a week, sometimes on weekends. “So some weeks, I need to take only one day off from work.”

Like all other men in the cast, besides “the Romans”, Mayet currently sports long hair and a beard. His last visit to the barber? “That was on Ash Wednesday in February 2021. It’s a tradition that the men in the Oberammergau Passion Play let their hair grow as of Ash Wednesday the preceding year.”

Beards must also be grown, though Mayet and others have had theirs trimmed occasionally. “Our director, Christian Stückl, doesn’t want us to have big beards; he wants our faces to have a bit of shape. And some of us could keep our beards shorter for the safe wearing of facemasks, for example those in medical professions. But I hope that the virus will recede to allow us to have more biblical beards.”

Many actors cut their beards off “straight after the final performance, but my beard never comes off entirely. I’ll just trim it to its normal length, a seven-day beard,” Mayet said. The long hair, however, will be cut, he added empathetically.

Oberammergau is traditionally a solidly Catholic village, where many of the famous murals on house facades depict biblical scenes or the Blessed Virgin Mary. But in more recent times the village has become more pluralistic. “The Catholic faith characterises Oberammergau, but we also have Protestants and Muslims in our community, and everybody gets together and participates in the Passion Play,” Mayet said.

“Anyone who was born in Oberammergau or has lived here for at least 20 years may take part, and that’s very important in bringing the community together and giving the people a mutual connection. So this year, for the first time we have Muslims taking part.”

Prayer is still an important feature behind the scenes,” Mayet said. “Before every performance there’s a group prayer, led by either the Catholic or Protestant chaplain, and the Our Father is also said. Of course there are some who have left the church, and they might not take part in the prayer, but at the Passion Play the religious is always present, and the churches are always involved.”

This year’s run of the Passion Play will be the first Mayet’s sons, aged seven and three, will experience. “I’m looking forward to sharing that experience with them. I hope that they may grow into this tradition. This year, on days when I’m not playing Jesus, I’ll introduce them to the stage.”

And how long does Mayet want to take part in the play? “I hope until I’m over 80, but obviously I don’t know. As long as possible… I hope to be on stage every ten years; it just is part of my life.”

He will be too old to play Jesus in the next run, but “there are many other interesting roles I’d like to play after having been Jesus twice — maybe I could play a villain for a change, like Pontius Pilate!”

The full interview is published in the May 2022 issue of The Southern Cross magazine. The Southern Cross is leading a pilgrimage to the Oberammergau Passion Play in August, led by Archbishop William Slattery. For more information see http://fowlertours.co.za/oberammergau/ or contact Gail at 076 352-3809