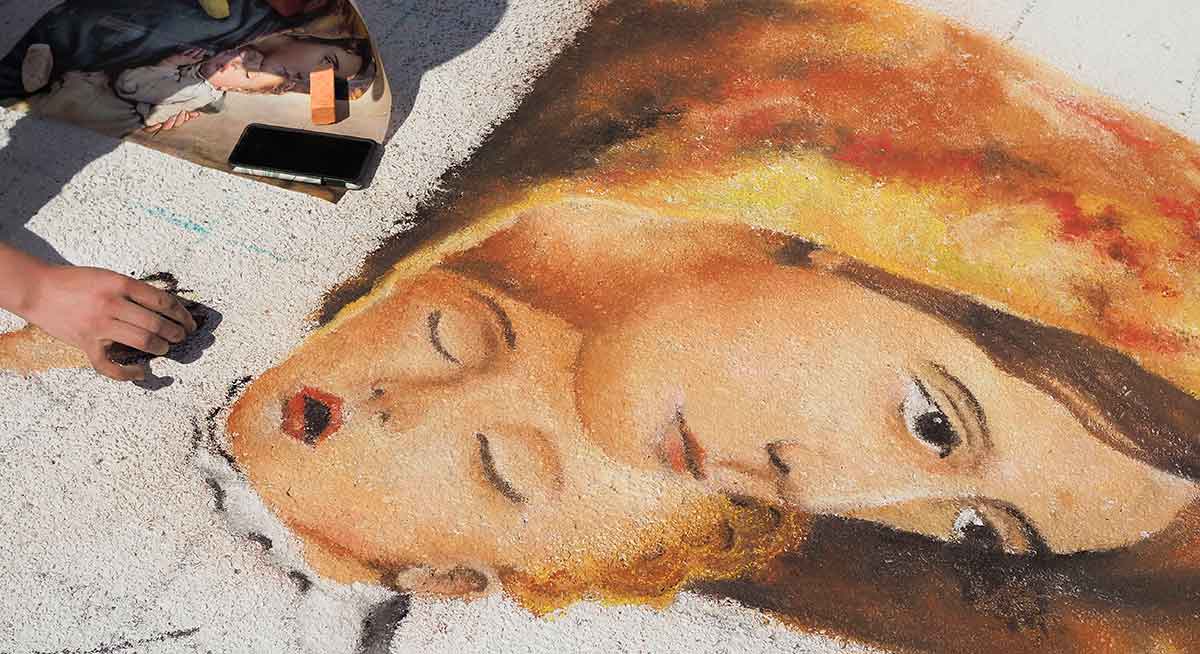 Maria Loh draws an image of the Madonna on the sidewalk outside of the office of the Siouxland Catholic Radio station and St. Boniface Church in Sioux City, Iowa, on April 21, 2022. (CNS photo/Jerry L Mennenga)

By Joanne Fox – Maria Loh is an artist whose sacred work is transitory, totally dependent on the elements.

Yet, she made her religious mark on a Sioux City sidewalk April 21.

Loh’s visit was in conjunction with the radio station’s spring pledge drive and first-ever Juried Youth Art Festival, which had as its theme, “Mary, A Model of the Perfect Communicator.”

Though Loh began her artistic journey at a young age drawing and painting, her passion for chalk art began several summers ago.

“I knew nothing about chalk until I picked up a box and started doodling,” she said. “If I think back, my grandparents had a chalkboard in their home and I always enjoyed drawing on it, so the love may have started when I was a child.”

Loh simultaneously discovered the rich history of street art and the Catholic tradition surrounding chalk art, which is believed to have its beginnings in Europe between the 13th to 16th centuries.

Madonnaris, or chalk artists such as Loh, travelled to festivals using chalk to draw the Madonna or religious icons.

“I just fell head-over-heels in love with the combination of the chalk and creating sacred works when I attended such festivals,” she said. “I could not wait to be drawing with chalk each summer as the snow melted on the North Dakota pavements.”

Interest in Loh’s art ignited when images of her drawing of Our Lady of Lourdes in her parents’ driveway in 2020 were posted on the Diocese of Fargo’s Facebook page in May. The response astonished Loh, the oldest of five children.

“I had been happy to create in quiet and solitude so I would have preferred if God would have left me in my backyard to create,” she confessed. “But the response showed me how God is capable of sharing my work with others.”

Loh’s visit to Sioux City provided a unique opportunity to combine the aspect of the Catholic faith with the artistic skills of the young artists in the juried competition, said Lisa Niebuhr, the station’s listener relations director.

“That’s a pairing you don’t find being offered elsewhere,” she said. “We believe it is a valuable collaboration that allows others to experience the awesome features of both Maria’s talent and the teaching of the church regarding the Blessed Virgin Mary.”

Loh was up with the sun on April 21 and began by taping off a portion of the sidewalk, then painting it with white tempera as the primer to smooth imperfections in the cement.

During the next eight or so hours, she painstakingly added the vibrant blues and yellows with chalk that is highly pigmented to withstand the outdoor climate.

“God must have been watching out for us, as the weather the day before had been rainy,” Niebuhr said. “The next day had high wind gust advisories, but the piece was still visible.”

In keeping with the tradition of chalk artists, Loh responded to inquiries from interested bystanders.

“I wanted people to know that God is the ultimate artist,” she said. “We can look at creation to see that. Everything we create, we create for his glory.”

At the end of the day, the radio station held a reception for the first-place winners in grades 1 through 12 of the art festival.

“We were surprised with 180 entries from more than 30 counties in our listening area,” Niebuhr said. “A panel of professional artists judged the art, choosing a first place, second place, third place, and honourable mention in each grade. We also encouraged individuals to check out all of the art and vote for a viewers’ choice award.”

Loh offered insights and spoke with the winners and their families.

She also talked about her sidewalk presentation and chalk art experiences.

Then, on April 22, Loh visited with students and did some chalk art at St. Michael Grade School in South Sioux City, Nebraska, as well as some of the elementary buildings with the Bishop Heelan Catholic School System in Sioux City.

“When I was in school, I would have loved to know an artist, have my questions answered, and know it is possible to be an artist,” she said. “I want to be that someone. I also want to reaffirm to every student that images speak when words fail.”

Joanne Fox is the retired managing editor of The Catholic Globe, former newspaper of the Diocese of Sioux City.