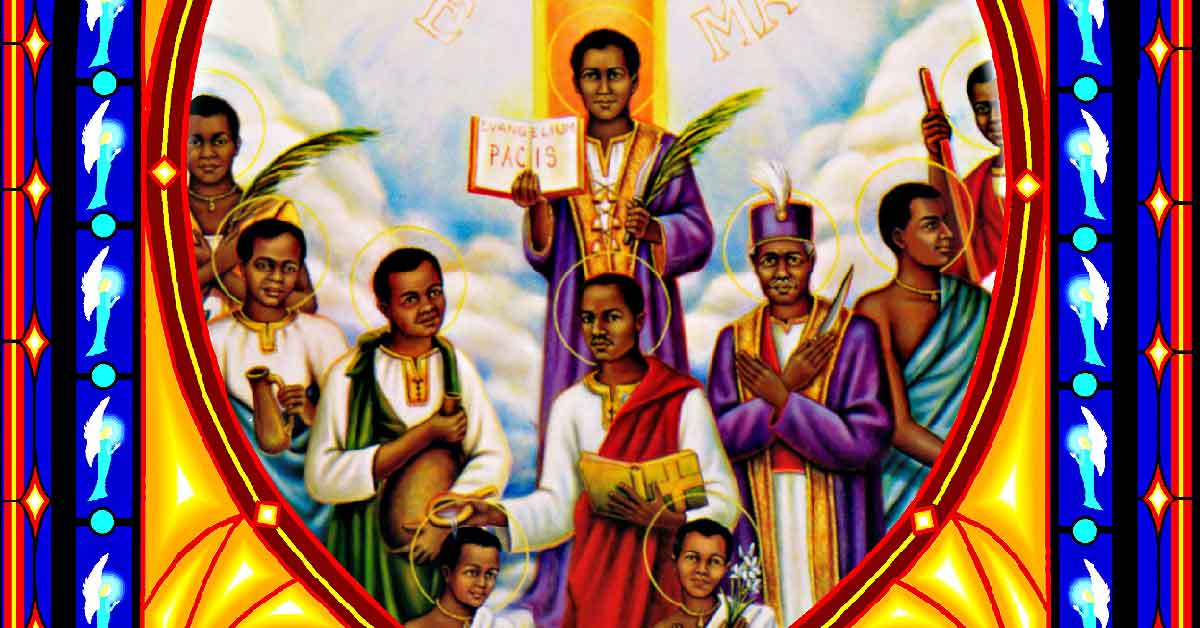 In the 1880s, a king in what is now Uganda launched a persecution of Christians. Günther Simmermacher tells the story of St Charles Lwanga, St Kizito and companions.

The Catholic faith came to Uganda in 1879 when the Missionaries of Africa of Archbishop (later Cardinal) Charles Lavigerie of Algiers came to evangelise the people there. Initially the missionaries, known as the White Fathers on account of their white robes, were warmly welcomed by Kabaka (or King) Muteesa of Buganda, the central and southern part of modern Uganda. They made many converts, including a number of young pages in the royal court. Among them was Mukasa Balikuddembe, a high-ranking official of the royal court, who took the Christian name Joseph.

Things changed in 1884, when the old king died and his 16-year-old son, Mwanga II, succeeded him. History paints Mwanga as a thoroughly nasty piece of work: morally corrupt and dissolute, given to pederasty with boys. Some of that reputation may be due to colonial propaganda, but he doubtless was a brutal man and sexual predator.

The old king had been a wily diplomat who played off the colonialists against one another by allowing Christian denominations, representing different European interests, to evangelise among his people. But Mwanga saw missionaries as a threat to his rule, and therefore needing to be neutralised. Within months of becoming king, Mwanga had several Christians killed, including the Anglican Archbishop James Hannington, the first bishop of his denomination in East Africa. Mwanga expelled Christians and ordered that converts to Christianity renounce their faith. 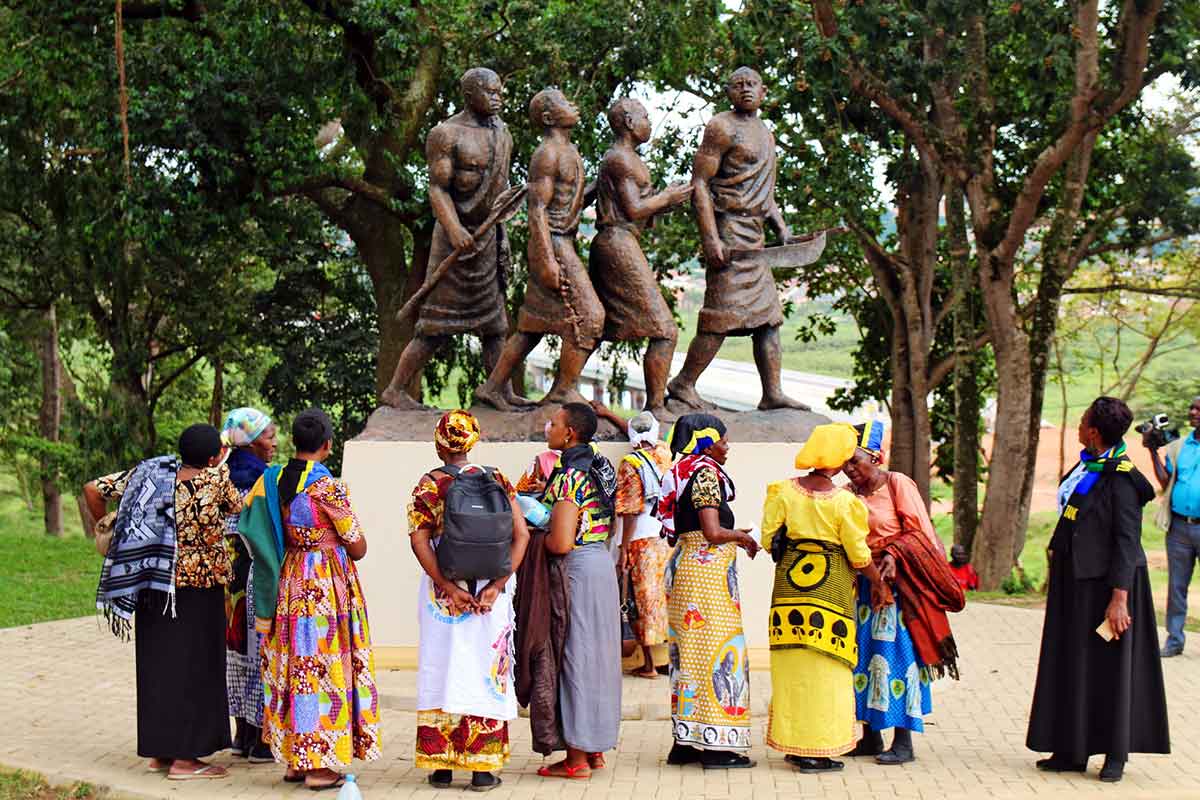 Monument at the shrine at Munyonyo of the Uganda martyrs and their persecutors walking towards Namugongo, erected on the spot where they started their death march on May 26, 1886.

Yet in the midst of all that danger, baptisms continued. On November 15, 1885, just over two weeks after the massacre of Harrington and his caravan, Mwanga executed Joseph Mukasa Balikuddembe — his majordomo (or senior advisor) who had become a Catholic in 1882 — for condemning the murder of the archbishop and protecting the court’s pages from the king’s sexual advances. As his successor, Mwanga named the 25-year-old head of the pages: Charles Lwanga. And that same evening Lwanga (known in Luganda as Kaloli) was among those baptised by Père Giraud, a White Father. More than a hundred catechumens were baptised in the days after Mukasa’s beheading.

Meanwhile Lwanga did all he could to protect his charges from Mwanga’s sexual predation. The king was not a homosexual (the 17 wives he accumulated suggests a pansexual nature), but he was a man who enjoyed asserting his power. And when the pages who had converted to Christianity rejected the king’s sexual advances, protected by Lwanga (as they had been under Mukasa), the king regarded that as rebellious disobedience — as he did the adherence to Christianity among his subjects.

Things came to a head on May 25, 1886, just over half a year after Lwanga’s baptism. Mwanga ordered a general assembly at Munyonyo, where he condemned two pages to death for having received catechism. The king himself executed the boys’ catechist, Denis Seboggwawo, by driving a spear into his throat. This was the beginning of a purge of the court’s Christians, whom Mwanga regarded as agents of the colonialists.

Lwanga saw what was coming: the next morning he clandestinely baptised those pages who were still catechumens, including the youngest of them, 13-year-old Kizito. Later that day, all present at the assembly were interrogated about their Christianity, Catholics and Anglicans alike. All Christians were given an opportunity to renounce their faith. Led by Lwanga, they all asserted their fidelity to Christ: “Till death!” Mwanga replied: “Let them be put to death!” 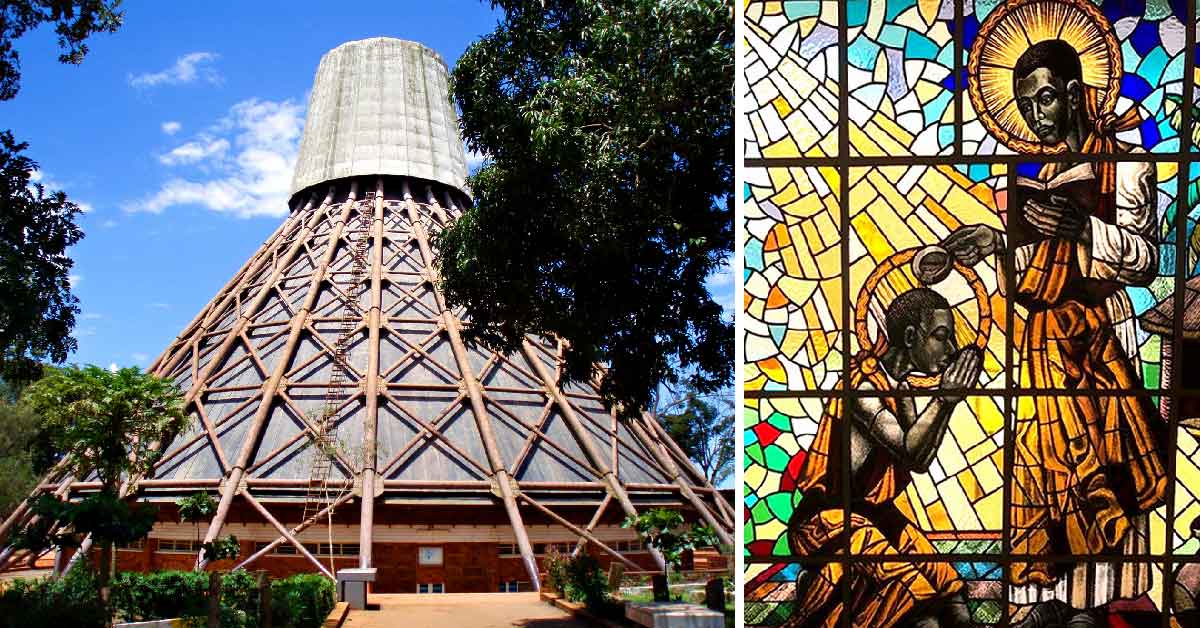 (Left) The shrine at Namugongo in Kampala, which covers the spot where St Charles Lwanga and his companions were burnt to death. (Right) St Charles Lwanga baptises St Kizito. Stained glass at Munyonyo Martyrs Shrine.

The condemned were then marched for two days to Namugongo, the place of their eventual execution. On the way, three prisoners — Pontian Ngondwe, Athanasius Bazzekuketta, and Gonzaga Gonza — were killed by the guards. Another, Matthias Kalemba, told the guards: “God will rescue me. But you will not see how he does it, because he will take my soul and leave you only my body.”  The guards mutilated him and left him to die on the side of the road.

The day of the executions was June 3 — which that year happened to be the feast of the Ascension. As a senior member of the court, Lwanga was taken away for a private execution by fire. First they charred his feet and offered to let him live if he would renounced his faith. He declined, telling the Guardian of the Sacred Flame: “You are burning me, but it’s as if you are pouring water on me. Please, repent and become a Christian, like me!” As the flames engulfed him, Lwanga kept praying. As the flames reached his chest, he cried out, “Katonda” (“My God”), and died.

After Lwanga’s death, 12 Catholic and nine Anglican boys and men were bound and wrapped in reed mats before they were set alight on a pyre. They were praying and singing hymns until they died, echoing the cheerful death of the martyrs of the early Church. Meanwhile, the Catholic Mbaga Tuzinde was beaten to death for refusing to renounce Christianity, and his body was thrown into the fire. The man who gave the order was the chief executioner — his own father.

The execution of the Christian members of the royal court set off a persecution that saw the torture and execution of more than 100 Catholics and Protestants at Namugongo. Among them was a judge, Matthias Murumbu, and a chief, Andrew Kagwa of Kigowa. The final execution was on January 22, 1887.

Charles Lwanga, his companions and the other Catholic martyrs were beatified in 1920 by Pope Benedict XV and canonised by Pope Paul VI in 1964, who five years later became the first reigning pope to visit sub-Saharan Africa when he toured Uganda. Their feast day is June 3.

St Charles Lwanga is the patron saint of African Catholic Youth Action, as well as of converts and torture victims. Joseph Mukasa, the first of the Martyrs of Uganda, is a patron saint of politicians and chiefs, and St Kizito of children and primary schools.

The Martyrs of Uganda are commemorated at shrines in Namugongo, the site of their execution, and at Munyonyo, where Mwanga condemned the martyrs to death and St Charles baptised Ss Kizito, Mbaga, Gyavira and Muggaga. In normal years, about half a million faithful come to these shrines, both in what is now the Ugandan capital of Kampala, on the martyrs’ feast.

And how did things end for the persecutor Mwanga? With the help of the British, Mwanga was overthrown by his brother in 1888. But not long after, he negotiated a deal which saw him surrendering the kingdom to British control in return for reclaiming his title. Two failed attacks on the British saw him deposed in 1897 and exiled to the Seychelles.

There is one final twist in the story: in exile, Mwanga became a Christian himself! He converted to the Anglican Church, taking the name Daniel. He died at the age of about 34 in 1903.