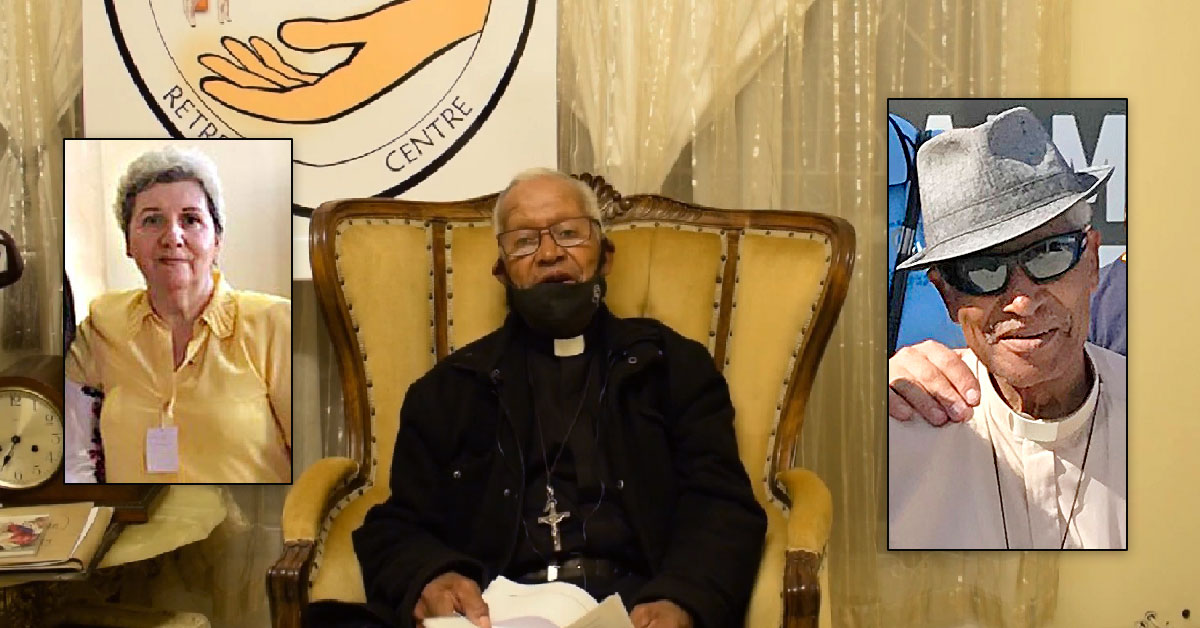 Fr Colin Bowes delivers a spiritual healing for the Covid-19 era via YouTube from the Amazing Grace Centre in Noupoort in the Karoo in September. Inset: Maria José Encarnação on the morning after her miraculous healing in Portugal in 2018.

By Gail Walters – When Father Colin Bowes, a renowned exorcist of De Aar diocese, celebrated the 50th anniversary of his ordination to the priesthood earlier this year, he could look back to a life with many great experiences, which have included presiding over miraculous healings.

He celebrated his golden jubilee with a Mass at Christ the King cathedral in Johannesburg, followed by a celebratory luncheon, with frequent collaborators Frs Barney McAleer and Joseph Wilson MSC among the guests. A second celebration, mainly for family and friends, was held at All Saints parish in Ennerdale, south of Johannesburg, where Fr Bowes grew up. He was the first priest to come from the parish.

Fr Bowes, now 87, joined the priesthood in his early thirties and was ordained at the age of 37 at Christ the King cathedral in Johannesburg, the city in which he was born and raised. Due to racial challenges, he transferred to the diocese of De Aar, to help bring the “Living Water” to the parched centre of South Africa. There he served for many years as vicar-general.

The devotee of the Catholic Charismatic Movement has also served for decades as the director of the internationally renowned Amazing Grace Retreat Centre in Noupoort, which he founded.

In 2012, Fr Bowes was an invited exorcist priest at St Charles Borromeo parish in Victory Park which was hosting a Renew-Africa Mission. Hundreds attended and his works in Gauteng strengthened.  Fr Bowes has received invitations as part of his healing ministry from parishes in KwaZulu-Natal, Eastern Cape, Northern Cape, Western Cape, Northwest, Free State, Botswana, and Malawi.

Some 3000 pilgrims per day attended the healing seminars in Malawi. Many healings took place. Two particularly bad manifestations took place. Fr Bowes confirms that during the laying of hands, there were demonic manifestations in a woman and a young man.

In 2018, during Africa’s Alpha and Omega mission to a healing seminar for a team of Catholic Charismatic Renewal members in Portugal’s Algarve region, he encountered a local woman, Maria José Encarnação, who had been in a wheelchair for five years. Fr Bowes prayed to Our Lord for her healing, and during his prayers, he helped Maria to go on her knees. He then instructed her to get up and walk — and she did. The story was reported in The Southen Cross at the time: Miracle Healing at the Hands of De Aar Priest

In Noupoort, a similar incident occurred when Fr Bowes prayed for a woman in a wheelchair. He lifted her out of the wheelchair and said: “In the name of Jesus Christ!” A doctor in Kimberley had said she would never walk again, but at the healing session, she got up and walked. She is still walking without a spinal brace, and is a healthy, spiritually healed woman. Fr Bowes emphasises that he is only a servant of Christ, as the healing is not from him but from heaven.

Other highlights of Fr Bowes’ priestly ministry include concelebrating Mass with Pope John Paul II in Harare, Zimbabwe, and Gaborone, Botswana, during the papal visits there in 1988.  Fr Bowes fondly recalls an occasion at San Giovanni Rotondo, the shrine of Padre Pio in southwestern Italy, when he was asked to bless priests, nuns and pilgrims with St Pio’s gloves. And in Medjugorie, Ivanne, one of the visionaries, invited Fr Bowes to accompany him at the altar of the church there.

At the age of 87 years, Fr Bowes believes that his vocational calling is his biggest blessing in his life, and says that he is fulfilling his priestly calling with a passion in bringing people closer to Jesus Christ, with the aid of the Holy Spirit and our Blessed Virgin Mary.  He believes his priestly vocation is getting ever-stronger, and that it will grow until he departs from Earth.