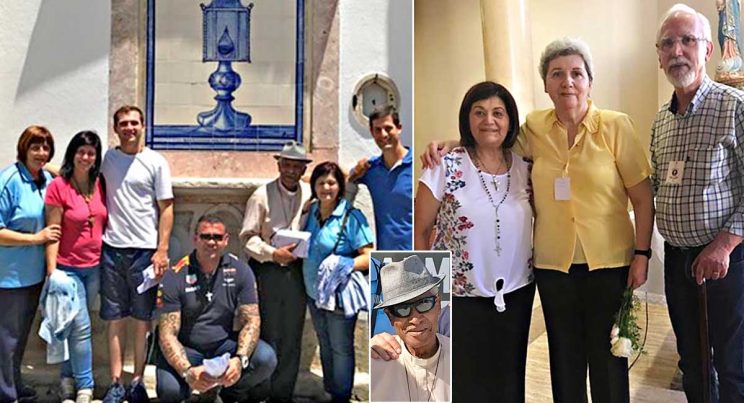 A South African priest presided over the healing of a disabled woman during a conference in Portugal. Fr Colin Bowes, the vicar-general of De Aar and its diocesan exorcist, accompanied members of South Africa’s Alpha and Omega Mission to a healing seminar for a team of Catholic Charismatic Renewal members in the Algarve region.

The seminar was led by founding members of the mission Charles Pritchard, Fernanda de Sequeira and Alice Grota.

“The highlight of the seminar was a miraculous physical healing led by Fr Bowes,” said Mr Pritchard.

Get Up and Walk!

“Fr Bowes instructed her to get up and walk, which, to everyone’s surprise, she did,” Mr Pritchard said. “Jubilant praise, worship, song, and dance persisted until the early hours of the next morning while prayer-overs were taking place.”

Fr Bowes is also the founder and director of the Amazing Grace Retreat Centre in Noupoort, and is internationally respected in the exorcism field, answering many healing requests.

According to Mr Pritchard, Christ truly showed his healing presence at this seminar.

He said that the attendees left the seminar with renewed and strengthened spirits, and were “armed with the knowledge to be God’s servants in this lost and chaotic world today”.

Mr Pritchard added that in December 2017, Christ showed his presence in a similar way at the first Alpha and Omega healing seminar in Durbanville, Cape Town, after he miraculously healed a disabled woman after she was prayed over.

The Alpha and Omega Mission, based in Johannesburg, has a publishing office, counselling and deliverance prayer facilities in Johannesburg and Cape Town, as well as homes for the destitute and spiritually afflicted.

The mission’s primary focus is to help people grow closer to Christ by implementing his living word, and to encourage them to make use of the healing sacraments in the Catholic Church.

Archbishop Buti Tlhagale of Johannesburg has blessed the Alpha and Omega Mission and declared it in good standing with the local Church in his archdiocese.