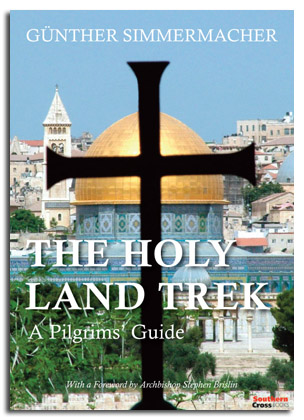 Let Günther Simmermacher guide you through the greatest holy sites of the Holy Land and Jordan on a virtual itinerary.

‘Simmermacher marshalls a mass of material, presenting it simply and vividly — with humour and irony.’ – Paddy Kearney, The Southern Cross

‘An interesting and funny look into the places of the Bible.’ – goodreads.com

“Turning the pages of the book is a journey in itself.” – Sydney Duval, Archdiocesan News – goodreads.com 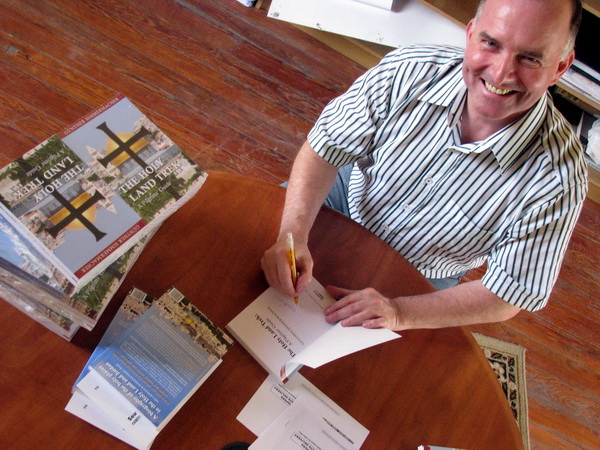 Interview with the author

The Holy Land Trek author Günther Simmermacher is interviewed by Claire Mathieson.
CM: You obviously have been to the Holy Land before. What is your experience in the Holy Land?
GS: Yes, I first went in 1999, and after that I organised several pilgrimages that were headlined by The Southern Cross. The thing about the Holy Land is that there is so much to take in. If you go in a group, you meet a whole lot of new people, the tour guide is giving you a huge amount of information, you have all these spiritual experiences to take in. It really is a lot to absorb. It’s very rewarding and beautiful, but it’s an intense experience. Especially Jerusalem. So I think it’s good to go more than once, if one can. Or if one can’t, perhaps to read my book.

So is the information overload the reason you decided to write The Holy Land Trek?
Partly, yes. I think it’s absolutely necessary to prepare before going on a pilgrimage. You can’t really turn up in Jerusalem and say: “OK, now surprise me, Holy City”. You’ll lose so much if you come to, say, Capernaum and you have no idea why you’re there or what you are seeing. So The Holy Land Trek is intended to be an aid in preparing people for the Holy Land.

But the idea really came from the response of Southern Cross readers to several series I had written after pilgrimages. Several said I should turn the articles into a book. But I recently read again the first of the five I’ve written, in 2000. Looking back, that was a load of rubbish. Totally unusable. But the more you go to the Holy Land, the more you understand. In 2010 I started out with a fifth series of articles, and I thought I’d run out of interesting things to say, but I found I had plenty still to write about. So the past articles served as a sort of blueprint on which I could build for The Holy Land Trek.

What can people expect to find in the book – is it an itinerary, a history, a travel guide?
It’s set out like an itinerary. In that way I suppose it’s a bit like a travel guide, though I give no tips on hotels and nightlife and stuff like that. I do reveal the best place in the Holy Land to buy sweets though. Of course there’s lots of history in the book — biblical archaeology — and also the odd reflection and a few good anecdotes. I write about some of the people that are connected to the sites, like the architect Antonio Barluzzi and the painter David Roberts and the archaeologist Fr Virgilio Corbo. I also refer to the writings of travellers through the ages, from the fourth century to Mark Twain in the 1800s.

My wife actually defined for me what the book is like: she said it’s like a Bill Bryson book. So I suppose I’m like a Catholic Bill Bryson, without the style, wit, wealth or beard.

So this is not just a personal account?
I’ve tried to keep the personal to a minimum. This is not the kind of book where the author is the star of the show; the stuff he writes about is taking centre stage. That doesn’t mean I exclude all my experiences. I talk about the experience of going up in a taxi to Mount Tabor or how I virtually fell out of my bed in East Jerusalem when the muezzin sounded his call to prayer at four in the morning; that kind of thing. The reader also has the right to know that I managed to bang my head on an entrance to the Church of the Holy Sepulchre! But it’s not a personal travelogue, no.

Does the book focus solely on biblical times, or will it also touch on more recent history?
Well, the Bible stuff is important, and almost everything in the Holy Land comes back to it. But the book looks at sites that were erected by Byzantine Christians and Crusaders and also by the Franciscans and Benedictines over the past few centuries. So it covers all kind of eras. And some subjects have little to do with the Bible; stuff like the kerfuffle over the kibbutz that sells pork, or how the Greek mathematician Pythagoras evaded being sold into slavery, or why there’s been a ladder standing at a window of the Church of the Holy Sepulchre for more almost 300 years…

Who would be interested in the Holy Land Trek – those who have been before or those who are new to the idea of pilgrimage?
I think it’s a useful book for people preparing to go, and I cannot stress enough how important preparation is; reading up about what you will see. The book might also be helpful when one is travelling in the Holy Land, to read before one actually sees the sites. I hope it will also appeal to people who have been, to relive their experience. In fact, it might also help them label their photos correctly. And I hope that people who’ve never been, and maybe never will go, might find the book of interest.

Is this book written with South Africans in mind specifically?
It makes a few references to South Africa. For example, I compare Nazareth to Pofadder, and I repeat an exchange I had in Afrikaans with an Arab trader in Jerusalem, and tell the story of how the South African plaque of the Annunciation arrived in Nazareth, but these are universal kind of stories. I don’t think it’s a specifically South African book.

And is this book written with Catholics in mind?
Well, the primary market is Catholic. The facts in the book obviously transcend that, but the perspective is Catholic. But then, most of the shrines in the Holy Land are run by Catholics. I’ve read pilgrim accounts from Protestant perspectives, and for the most part have found that the Holy Land experience is pretty similar across the denominational divides.

How much research went into the book?
Quite a lot. The thing is, so much nonsense has been written about the Holy Land, a lot of stuff that just isn’t correct. And a lot has not really been covered that much. Now, I hope I’m not setting myself up to be accused of doing the same, but I’ve tried to get the facts straight, as a good journalist should. And sometimes the nuggets revealed themselves.

For example, I spent a whole evening chasing down a date; hours of trawling and sifting and so on, to get to the date when the ladder on the Church of the Holy Sepulchre first appeared. I got a lot of great info only to arrive at the date which I had started out with, the 1830s. Then I found out that the ladder was mentioned in a document in 1757. A few weeks later I looked through a history of the Church of the Sepulchre produced by the Franciscans, and there was an image of an engraving of the church from the 1720s. I looked closer, and, would you believe it, there was the ladder, being on that ledge a hundred years earlier than any picture of it I had seen.

But with a book like this one can end up with too much information. So you do a lot of research, and then take editorial decisions about when to stop going into detail, so things don’t get bogged down in unnecessary stuff and confusing technicalities. I had also set myself a page limit of keeping the book below 250 pages, else things can drag on a bit. I hope that some readers will be inspired by The Holy Land Trek to dig a bit deeper on some of the subjects.

Finally, what is your favourite site in the Holy Land?
Just one? Let me mention two. Capernaum really grabs me because we can locate the historical Jesus there. I mean, we virtually have archaeological proof of that, with Peter’s house and the basalt-stone foundation of a first-century synagogue. You’ll have to do some incredible intellectual gymnastics to deny Jesus’ presence there. There are a couple of other places where we can locate the physical, historical Jesus. But Capernaum is my rational favourite.

The Church of All Nations at the foot of the Mount of Olives — Gethsemane – is my emotional favourite, and not only because of its stunning architecture. It is the best place for prayer in the Holy Land, I think.

And where can we find The Holy Land Trek?
I hope the Catholic bookshops in South Africa will stock it. Or you can order it straight from books [at] scross.co.za  – and we’ll send it to anywhere in the world.

The Holy Land Trek is also available as an eBook 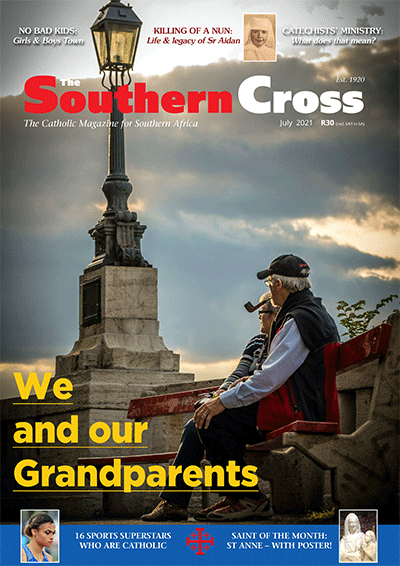 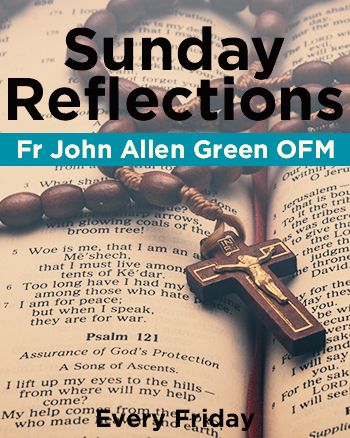 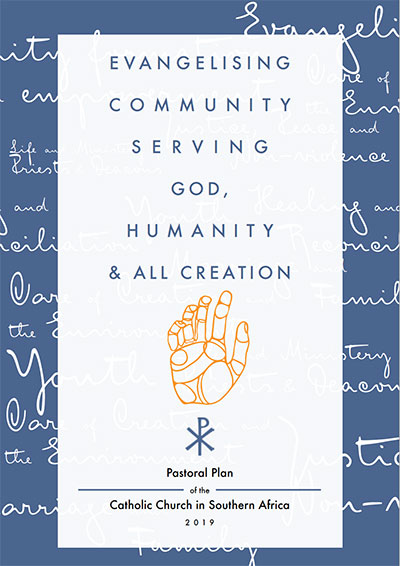 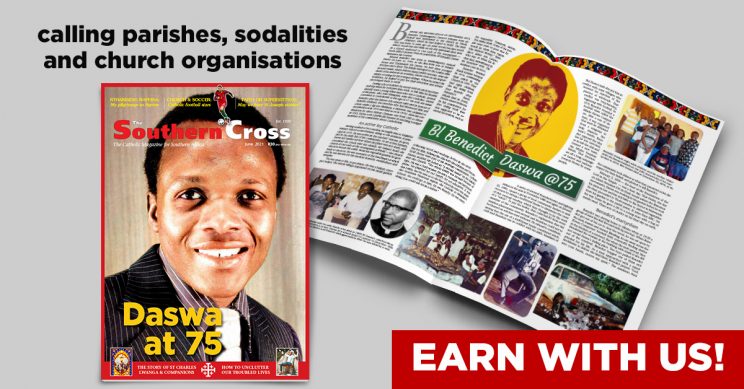