Missal 2: How we got to English

This week’s article on the new missal looks at the context of the decision to develop and use a new English translation.

Older Catholics will remember that once upon a time, only the priest and the altar servers said the words used in the Mass and that many Catholics did not own a missal or even tried to follow the Mass. The Mass was in Latin, most of us did not understand the language and many priests used to be able to move through the Latin quite fast. In fact, many Catholics either said the rosary or read private prayers from the numerous prayer books that were available in those days.
The concept of the active involvement of lay people in the Mass only began to emerge in South Africa in the late 1950s.  People were very excited when what was called the “Dialogue Mass” was introduced. For the first time in centuries, the congregation was encouraged to join the altar servers in making the responses. The Mass was still entirely in Latin, and most people still did not understand the language, but there was certainly a growing awareness of empowerment and participation following this development.

In last week’s article, we referred to Sacrosanctum Concilium (The Constitution of the Sacred Liturgy), the document developed by the Second Vatican Council on the subject of liturgy. This wonderful document asked us to look back at the liturgical approach of the early Church with great emphasis on the importance of active participation in the liturgy by all.

Most Catholics who lived through the Vatican II era would say that the two most obvious changes in the liturgy were turning the altar around so that the priest faced the congregation, and the decision to allow the Mass to be celebrated in the vernacular language of the people worshipping together.

Task groups were established to address these and other changes, which meant the redesigning (and often the rebuilding) of altars, as well as assembling groups of linguists and liturgists to produce translations into every language on the planet. This included English. The International Commission on English in the Liturgy (ICEL) was established, with our own Archbishop Dennis Hurley of Durban as one of its most important leaders. After considerable debate, ICEL took three key strategic decisions:

At the distance of 40 years, it is easy to forget that all three of these decisions led to some degree of controversy. Most English-speaking Catholics were excited at the prospect of celebrating Mass in their own language. However, some people remained convinced that Latin was the only acceptable liturgical language and others asked for a much slower process to be followed. 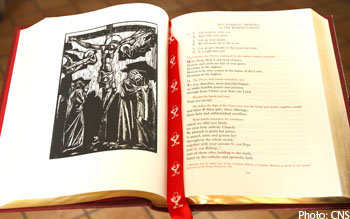 The concept of “Dynamic Equivalence” in translation also led to debate, with some people maintaining that the richness of the original Latin text was being lost.  “Dynamic Equivalence” attempts to interpret and convey the thought and intention expressed in a source text, (often entailing moving away from literalness, original word order, and so on). We’ll examine this in more detail next week.

The decision to use the Jerusalem Bible led to further debate. Some groups of people believed that this version was too modern and did not like the absence of what had come to be called “biblical language”—the Tudor English of the wonderful Douai/Rheims Catholic translation and the widely used King James version. Others felt that it was too formal and stiff and would have preferred some of the more modern translations such as the Good News Bible and the Living Bible. The 1955 translation by Mgr Ronald Knox in particular continued to be favoured by a substantial number of people, particularly in England.

However, ICEL were convinced that their three decisions were correct and work began in earnest. The Roman Missal of 1969 (which continued to use Latin, which to this day remains the official language of the Church) was used as the starting point, and ICEL then proceeded to work with remarkable speed, particularly since the decision to apply “Dynamic Equivalence” meant working in new territory for the Catholic Church and therefore needed new skills.

The first edition of the English translation of the Roman Missal was published in 1973. It is important to note that ICEL made it clear that this edition had been prepared with great haste and would need to be re-examined and probably redone in time.