Seek out role models in the Church

To discover what is needed from each and every one who wishes to be a committed Christian, we cannot do better than look at what Christ demanded of his Apostles.He is very clear in his final instruction to them. First he orders them: Go! Make disciples of all the nations. Then, he adds: Baptise them in the name of the Father, the Son and the Holy Spirit. And finally he says: Teach them. 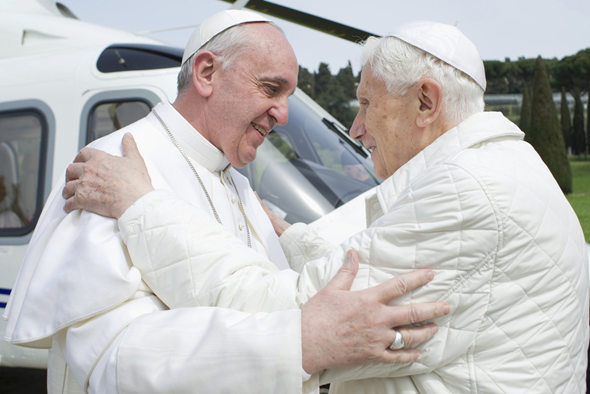 Thats why Jesus starts by saying, Show them, that is, Be their role models. (CNS photo/L’Osservatore Romano via Reuters)

How do we make disciples of others? There is really only one sure way, and that is to show how life in Christ needs to be lived. It is our way of life and lifestyle more than anything else that will encourage others to want to become Christians.

That’ why Jesus starts by saying, Show them, that is, Be their role models.

Of course this is a real challenge, because most of us don’t consider ourselves material for role models. So, it is helpful to consider where we can find such people.

Where do we find role models in the Catholic Church?

The saints are definitely role models, as are Church leaders. In fact, we need look no further than the three most recent popes to find challenging role models for ourselves.

Pope John Paul II had a special calling to serve the youth. He saw their needs, was touched by their sometimes aimless searching, recognised that they had no one to offer them leadership at world level, and so decided to take the gap himself, saying to himself: This is what Jesus would do.

This is what made the World Youth Days such a resounding success that the pope saw the need to give leadership, and the leaderless generation who responded to the unambiguous leadership offered. That’s why after each World Youth Day hundreds of thousands of young people went home committed to living according to what they had been given to reflect and act on.

Pope Benedict XVI offered the Church and the world many speeches and writings which are logical and clear. They teach us about Jesus Christ, about who he is, what he did and said in his teachings, and how he lived as the Son of God, and the Son of Man.

His three volumes on the life of Jesus of Nazareth are a roadmap that leads us to know Jesus personally through an intimate encounter with him in the scriptures, in Christian life and in prayer.

Pope Francis by his life and the way he practises his faith is setting us a huge challenge.

During the week of discussions among the congregations of cardinals which preceded the conclave, numerous areas of life and practice that needed to be reformed had been identified. By his actions since his election, Pope Francis is showing us how well he had listened to the reports from various parts in the world, describing the state of the world and the Church’s response to it.

What is surprisingly fresh is that he has responded not by telling others what they need to do, but rather by showing us how to begin with ourselves first, if we want to reform the Church and the world.