The period of extreme dislocation from the Cape Frontier Wars, the nine wars between the Xhosa people and European settlers from 1779 to 1879, created new problems that Xhosa chiefs could not solve for their tribes, and the nation at large. 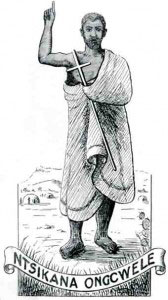 As a result, in the years immediately following 1812, Xhosa political leadership passed from the hands of chiefs to prophet figures.

These prophet-diviner figures abounded, vied for attention of the nation that was fast losing its moorings and confidence in its traditional ways.

Ntsikana was one of the more prominent prophets who emerged as the result of this need.

Ntsikana (c1760-1821) was born to Gaba, a councillor of the chief Ngqika, and Nonibe, who was his second wife. He lived a traditional Xhosa life, marked by circumcision, a polygamous marriage and praise as an orator, singer and dancer at Qawukeni where his mother lived.

Ntsikana encountered strands of Christianity through the proselytism of the likes of Reverends van der Kemp, Read and Williams of the London Missionary Society.

Once, while doing a traditional dance he was extremely adept at, he excused himself to lie down because he was not feeling well. On his way home he was quiet, and then kneeled to wash off his ochre in a stream. As he was doing that, he suddenly said: “Lento indingenileyo ithi makuthandazwe!” (This thing that has come over me says there must be prayer!)

Even before his proper conversion to Christianity he was opposed to the Xhosa millenarianism of the likes of Nxele (or Makhanda), who had rejected missionary ideology (I wrote about him last month).

By 1815, Nxele was more a war-doctor than anything, making the usual promises of the Xhosa war-doctors before him: “tying up the enemy weapons”, “turning their bullets into water”, “tying up their magic sticks”, and so on.

In Ntsikana, Xhosa tradition and Christian religion fused into a world and religious view that didn’t betray what was most important in both.

He came up with a comprehensive cosmological synthesis that is the envy of those who believe in acculturation on the one hand, and the purifying force of Christian message on authentic tradition on the other.

Ntsikana had achieved all this through personal revelation, evolution and taking the Christian message into his lived experience. In a way, Ntsikana established a pedigree for Xhosa Christianity independent of missionary influence, even as his teachings were infused and influenced by them.

For example, he accepted Christianity’s notion of sin, repentance and salvation, even as he expressed them in a Xhosa traditional language of hunting and pastoralism.

Ntsikana’s boil against Nxele seems to finally have burst after the Gompo incident, where Nxele had gathered Xhosa people around the rock of that name with a promise that the river people were going to emerge from there, bringing with them new cattle stock and wealth for the nation.

When the river people didn’t turn up, Nxele survived the incident by ruse. He said the river people had been disturbed by the racket of ululating and chanting made by those who gathered around the area when he, Nxele, had instructed everyone to keep quiet. The majority of Xhosa peopleliving in desperate times, and so ready to believe anything  accepted Nxele’s explanation. But not Ntsikana and others.

Ntsikana went around exclaiming that Nxele has turned upside down! Why does he mislead the people? He said Nxele was wrong in saying God is on earth: God is in the heavens! He told those who were coming from Gompo under Nxele’s influence; You only go to wash yourselves with sea-water at Gompo! But the real witchcraft is the badness of the heart, which you need to repent against.

He warned against Nxele’s pretensions to chiefdom: I am only a candle. Those who are chiefs will remain chiefs because they were given [chiefship] by Him and only He can take it away; I have not added anything to myself; I am just as I was. Nxele is wrong in saying he should be saluted; he is not a chief.

Ntsikana died in 1821, but left a legacy of sacred songs (the first hymns composed in the vernacular) and committed followers. His recruits numbered people who would later be prominent in Xhosa history, like the father of Tiyo Soga (I wrote about Soga in November).

His best known hymns were the Life Creator hymn, and “Ulo Thixo omkhulu ngosezulwini” (He, the Great God in Heaven).

His spirit is usually resurrected by those who want to draw on the wellsprings of Xhosa nationalism and Christian separatism. But Ntsikana, who had somehow successfully synthesised the two, would surely find this practice peculiar.