How the Pope is making Enemies

Reading Pope Francis’ encyclical letter Laudato Si’, one is reminded of GK Chesterton’s quip that “capitalism can be as godless and soulless and evil as its counterpart at the other end of the spectrum”. I mean that as a compliment to the pope’s critical balance. 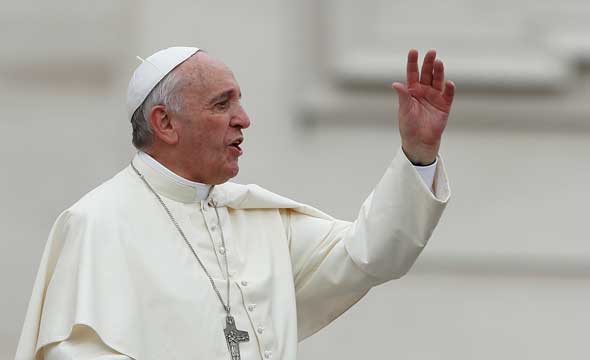 In the tradition of papal encyclicals and Catholic Social Teachings (CST), Laudato Si’ refuses to bow down before competing altars of economic theories.

In as much as it bashes the thrall of the radical free market system and the multinational corporations, it does not find other systems on the opposite spectrum completely innocent.

Pope Francis says that the problem is an idolatry that imagines markets can solve our moral crises for us. We can respect the usefulness of markets without needing to affirm their omnipotence.

Laudato Si’ laments bad governments of the past for creating easy platforms for corruption, bribery, black markets, massive misallocations of natural resources, patronage, and gross inequalities. This robs citizens of real economic development. But he reserves strong language for the idolatry of free market systems which he sometimes calls the dung of the devil.

It is by now obvious to any thinking person, without vested interests, that free markets don’t really bring about economic justice, as Popes John Paul II and Benedict XVI noted before Pope Francis. Instead they create a situation where markets and governments are dominated by monopolists, oligarchs and international bodies whose sole purpose is to serve the agenda of the economically powerful and rich.

It is also an admitted truth that gross economic inequalities is the major crisis of our age, and that radical free markets are the essential cause for lack of equitable economic distribution.

As it is to most people on the ground, it is also clear to Pope Francis that free market systems do not have the political will to solve the environmental issues of the world  nor do governments, since the multinationals use their financial muscles to lobby and buy governments to serve their agendas.

For his pain, the pope has earned the ire of the proponents of what is known as the Washington Consensus, a set of free market ideas which are supported by prominent economists and international organisations, including the International Monetary Fund, the World Bank, the European Union and the United States.

Is it a coincidence that Pope Francis’ popularity in the US reportedly has taken a nose dive this year? Even some Catholic politicians, such as Jeb Bush and Rick Santorum, have accused the pope of over- reaching his mandate by involving the Church on matters of economics.

Without getting into the argument about economics being social science, the Church has always claimed that incarnation compels her to comment and pursue solutions for human happiness in this world also.

And the Church has always prioritised, in her teaching at least, the common good over private property, as preached since the epoch of the Acts of the Apostles to Augustine to the modern CST. Pope Francis calls this the Wisdom of the Ancients.

Indeed, the Church prioritises transcendental values, something the pope reaffirms seamlessly in this encyclical through the teaching of St Francis for the care of the world and the environment. He calls for inner communal conversion, which he terms a sobriety principle for the care of creation that is in our stewardship.

Many outside the Church criticise CST as an impotent mash of relativism and wishy-washy truism that gets defeated by predominant economic realities. And they accuse the Church herself of failing to stand with the poor despite its CST rhetoric. They say in many dioceses of the West, for instance, the Church is closely associated with the multinational corporations.

The outraged backlash against the pope by the neocons who run the multinationals, particularly in the US, suggests that they too believed a tacit understanding existed between them and the Church. They are angry at this pope who seems to present CST with an urgent gravity that is unnerving them.

Sadly, there will also be some within the Church who, like the rich young man in Matthew 19, would walk away sadly rather than take up Jesus’ challenge for eternal life.

By inviting to the Vatican the likes of Naomi Klein, a thorn in the flesh of the multinationals, the pope is dragging the Church as an institution beyond just platitudes and rhetoric. He is taking action, proposing things like Systems of governance for the Global Commons which would be made up not only of Washington Consensus signatories but of poor and developing nations too.

The pope is showing us that having progressive knowledge is not enough; we need to move towards good behaviour and green living for the sake of the future of the planet. Perhaps when we look at the totality of history, now would be the moment the wheel turns for the betterment and sustainability of human existence on this continent.

Let’s also find relevant ways to make the message of Laudato Si’ relevant to the poor after all, they are in the majority on our continent.

As an African I felt a deep connection to this encyclical which I had never felt before with other encyclicals. After all, in more ways than one, it is the first encyclical written from the perspective of the so-called Third World.

I was also not surprised to learn that it was an African cardinal, Peter Turkson of Ghana, who helped the pope draft it.