Evolution in the Garden of Eden

We have recently seen some exciting times as far as the South African scientific community and Catholic faith is concerned. 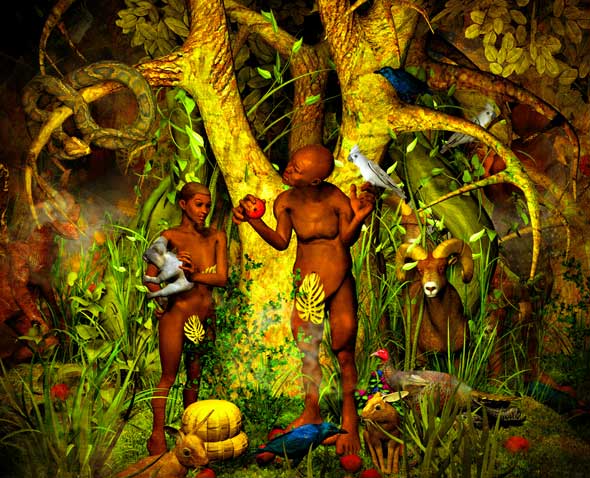 “In the Garden of Eden”, painting by artist Andrew Finnie (andrewfinnieartist
portfolio4.blogspot.co.za)

First there was the announcement of 15 partial skeletons of a new human-like species, including one named Naledi, the star. And then there was the canonisation of the Bl Benedict Tshimangadzi Daswa, who is on his way to becoming South Africa’s first canonised saint.

Bl Daswa has already begun to draw the attention of the South African public to the Catholic faith.

Those of us who are loud about our faith on social media were grilled during the live broadcast of the ceremony by non-religious friends. Some of the questions were just plain silly, but others were interesting. For instance, one of my Facebook friends asked if this means “Catholics worship ancestors, like in most African religions”.

This response led to the demand for a definition of ancestors, which I simplified by saying: “It’s people whose lives have contributed to the greater good of humanity and drawing others to the goodness of God.” Of course, I had to go into a little detail about God being ultimate Goodness, which is why all goodness is pleasing to God. The Church calls these saints, I concluded.

Needless to say, my friend, who is what I may call a pantheist traditionalist, was pleased by this. I waxed high about Catholicism being suited to the natural state of human belief, which is why Christian revelation and practice always look as if is based on some ancient rite of one culture or the other.

Inevitably, we reached the other current topic of Homo Naledi.

When I confessed my lack of palaeontological background, to avoid the situation, he told me he was more interested in what my Church believes regarding the theory of evolution.

Because I take to heart St Paul’s advice about always being ready to give reasons for the hope we hold, I explained that the Church teaches us that evolution is a tentative hypothesis.

We both agreed that even if so, it looks like a matter of time before science fills in all the gaps and the evidence of evolution becomes fully empirical.

It was his turn to wax lyrically about the dangers of Social Darwinism, which motivated ideas of eugenics, racism, imperialism, fascism, Nazism and other theories of aggressive individualism, such as laissez-fair capitalism and liberalism.

At this point it was back to belief systems, particularly the challenge hominids pose to the biblical and traditional interpretation of creation.

When he put me on the spot about the known inconsistencies of chapters 1-3 of Genesis I had to confess that I have not yet found an exegesis account that reconciles those chapters to my satisfaction.

Luckily we were more concerned by the scientific evidence for the pre-Adamic era. Scientific evidence shows that anatomical modern humans existed at least 60000 years in Europe, and longer in Africa, while biblical scholars, using genealogies listed in the Bible, date Adam and Eve to about 4000BC.

Luckily it had by then become late. I told my friend about something else that has always perturbed me in those chapters: what are these Nephilim the Bible talks about in Genesis.

“The Nephilim were on earth in those days — and also afterwards — when the sons of God went to the daughters of men and had children by them […] They were heroes of old, men of renown” (Gen 6:4). We both promised to research the matter further as we logged off Facebook.

Dr Michael Jarvis, who is a zoologist at the University of Cape Town, is of the opinion that the Nephilim are the Neanderthals of science. I once also read that genetically, the Caucasians are the only race with a Neanderthal gene, just about the only thing that differentiates them from other people.

How does that reconcile with the biblical account? Over to our specialists in the field: the theologians and scientists of the Catholic faith.

Lessons From A Hard Mom

Are there Limits to Freedom of Speech?