The day after the terror attacks in Beirut and Paris, a group of Palestinians stood outside the church of the Nativity in Bethlehem, the birthplace of the Prince of Peace, holding the French Tricolor and the Lebanese cedar flag in solidarity with the victims and survivors of these outrages. 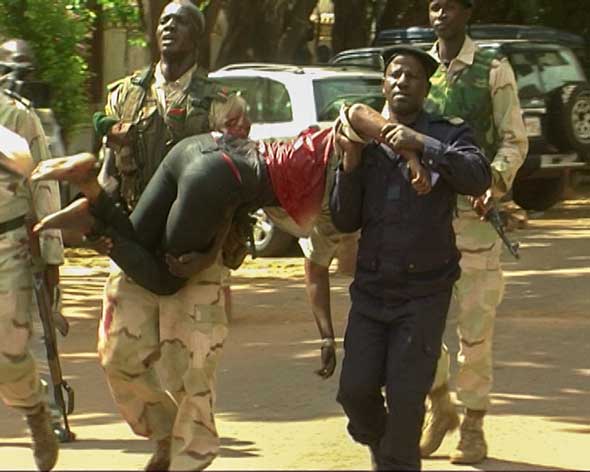 An injured hostage is carried by security forces from the Radisson Hotel in Bamako, Mali, Nov. 20. At least 22 people were killed that day when gunmen raided the hotel and held 170 people hostage. (CNS photo/EPA)

Meanwhile, the Internet was aflame with often angry accusations and counter-accusations about perceived selective acts of solidarity.

At the root of this was the depth and breadth of solidarity given to France, and the more muted response to the Beirut bombings that took place the day before the Paris attacks.

The complaint has merit: since both attacks had occurred within a day of one another, and were perpetrated by supporters of the same terror group, ISIS (now often referred to as Daesh), they should be seen as twin attacks.

Instead, politicians pledged their support to France and mostly ignored Lebanon; cities lit their monuments in the colours of the French flag but not in those of Lebanon’s; Facebook enabled a function whereby users could superimpose only the Tricolor over their profile pictures, and so on.

The Western media, meanwhile, in their limited coverage, tended to label the victims of Beirut for the area in which they lived, implying their own agency in their victimhood.

These arguments are true. However, sometimes they were expressed with a point-scoring sanctimony that failed to initiate a discussion as to why this may be so, and instead provoked ill-tempered debate.

It is, of course, preposterous to label as intrinsically “racist” an individual’s choice to show selective empathy. But in all the attention focused on France, with the media coverage and Facebook flags, and the lack thereof on Beirut, an implicit assumption is perpetuated that Western lives are of greater value than non-Western lives.

It is important to respectfully interrogate this disconnect, but not by pointing accusing fingers at those who, in good faith, sported French flags on their Facebook pages.

We may disagree about emphasis, but we must do so without allowing us to be divided.

Instead of keeping score about tweets and Facebook statuses, we must unite against the common enemy: the terrorists and the politicians whose ideologies perpetuate this cycle of violence; the weapons industry which feeds those who seek war and at the same time feeds off them; the ideological polemicists who fertilise the soil of hatred; the systems of greed which use war to profit from natural resources, and so on.

As Raymond Perrier notes in his column this week, Our Lord from his cross gives us a concrete example of compassion and solidarity with the suffering. Looking at Christ on the cross, we are called to solidarity with his people. We are called to be awake to all injustices and to pray about them, both for the victims and for the conversion of the perpetrators.

We must be awake and pray when terrorists who blasphemously invoke God to justify their violence blow up markets, churches and mosques in Kenya and Nigeria, Iraq and Syria.

We must be awake and pray when those who flee these terrorists in their own countries find no compassion where they seek refuge, and when their children are washed up on Mediterranean beaches.

We must be awake and pray when it is no longer safe to go to a football game, rock concert, shopping mall or restaurant in Paris, Beirut or Nairobi without bearing the weight of the possibility of falling victim to a terror attack.

We must be awake and pray when hospitals are being bombed by US drones or when civilians are being murdered by guided missiles in Gaza.

We must be awake and pray when Christian and Yazidi women and girls are being traded as slaves in the markets of Mosul, and for all acts of human trafficking.

We must be awake and pray when countries rich in mineral resources are turned into war-zones in the service of those whose greed has robbed them of their human decency.

And we must be awake and pray when there are poor people living very near to us who are going without dinner as we have the comfort of deciding what we will eat.