History, by its nature, is a contested terrain that is mostly written by the victors. But now and then the ghost of the vanquished is resurrected to put things into greater perspective. 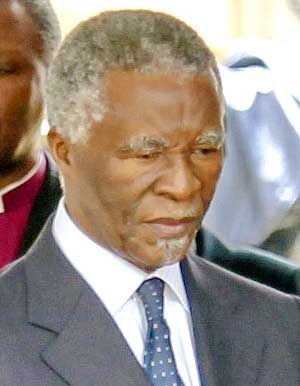 Thabo Mbeki, the former president of South Africa, does not strictly belong in the realm of historical ghosts, but his recent letters were certainly rocking our historical boat again.

A lot of people, within the African National Congress in particular, were getting upset by Mr Mbeki’s letters, claiming them to be just “the opinions of the wounded”.

And a farrago of opinions has been offered to dispute them. Like Mr Mbeki’s letters, none of them possess the necessary tone and rhetorical distance of historical writing. Perhaps it is still too early to discuss events of our recent past.

We might appreciate the opportunity to clear up facts and perceptions but we are still obsessed by our past that refuses to pass.

That is why, for sport, we enjoy shooting at our heroes, taking them down a peg or two, as a psychological cushion to protect ourselves from the disappointment of our oversized hopes. And we have no patience in waiting for our history to become settled, because we don’t trust each other—rightfully so since in the past our history has been written to serve the prejudices of the strong.

Mr Mbeki’s letters are argumentative, speciously factual, and their tone mostly comes across as complaints from a wounded bully. They have the feeble voice of someone who spends too much time alone behind drawn curtains.

And the motives of these letters are too materialistic, betraying the blatant lack of humility one might hope for in a statesman, the kind who have the reflective wisdom of age in them.

It would have been much better had Mr Mbeki taken a spiritual tone as he surveyed the history he experienced. That would have raised him above the fray.

By spiritual I don’t even mean religious—Mr Mbeki is not a religious man——but rather the ability to express complaints with a sense of things being ordered above the material realm.

That approach is so typical of the writings of the likes of the Roman philosopher, Seneca, who, after attending to the high power of being the first advisor of two emperors, suffered the humiliation of exile and eventually having his head cut off on the orders of the third emperor.

A septuagenarian like Mr Mbeki should be writing with some form of metaphysical pattern. Even if politicians do not necessarily believe in God, surely they believe in some form of a collective psyche of the nation? Otherwise they risk posterity judging them as having just been dipped in the futility of political point-scoring.

Mr Mbeki has a reference in the ANC. When the likes of Rev WB Rubusana and JK Jabavu were manoeuvred out of their positions of power within the SANNC, the ANC’s forerunner, by political intrigue, they didn’t shout their pride and shame from the rooftops or harbour petty grudges.

Instead they husbanded their anger into something more useful and lasting: they started black literature by reordering the history of their experience for posterity in an artistic and intellectual manner.

They became gentlemen of letters, demonstrating to us the values of African beliefs vis-à-vis Christian theology, thus preserving the wheat while disposing of the chaff in our traditional beliefs. Today their names are greater than mere politicians’, with a posterity that has no vested political interests.

We don’t care much about the icy slivers of menace coming from the intrigues of Luthuli House. We know that much of the ANC has abandoned the true liberation spirit, and we have made peace with that. And so we have given up its corpse to rot from the head, as it does. Saving the dead is a religious, not a political task. Somebody should tell Mr Mbeki this.

Mr Mbeki ought to rub his historical narrative on the rib of the real issues, like what to do with the economic gates he left open to flood us with the mess of neoliberalism; how to fix our public education and health systems; how to improve social cohesion in our country, and so on.

For once we would like to see a leader taking responsibility for what they have done and suggesting solutions, rather than descending into petty squabbles about who said what about whom. It’s time we sweep away the host of dead politics that is not getting us anywhere.

Our country is in desperate need of a collective catharsis.

Mr Mbeki should be the one showing us the way out from the accumulated aggression he was party to .

This country has gone through traumas, and the residues of emotional experiences are starting to come out in anger. And now we are told, in philosopher Frantz Fanon’s language, by one side to adopt the humility of the cripple, and by the other the violence of the colonialist.

We need Mr Mbeki’s wisdom in dealing with all this, not his wounded pride.

We also need the voice of our men of the cloth to once again provide the leadership to guide us away from the morally bankrupt black hole our politics seems to have plunged into.