Reading the history of black liberation in Southern Africa one is confronted by two things: how the people, under heightened political tensions, tend to appeal to numinous forces for solutions. And how “men of cloth” — religious leaders — stepped up to follow the path of that liberation. 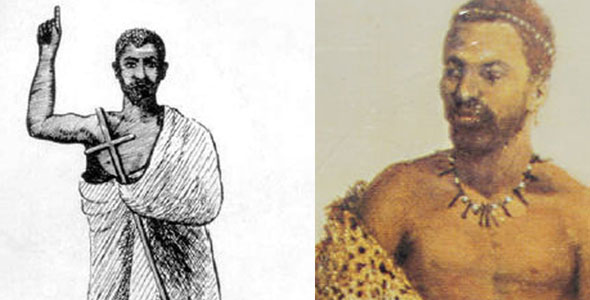 Times of national crises in our land are traditionally followed by the surge of the mystical. Everywhere you begin to see people wearing the regalia and trinkets of zobugqirha (witch-doctoring or divining), daubing their faces with white clay and such things done by those undergoing the process of becoming witch-doctors. This is usually a sign that people are under heightened tension of a  tribal/national nature.

In oral black history, or what began to be written during the start of the colonial era in the 19th century, the phenomenon plays itself over and over again in different guises.

For instance, just before British colonialism took its toll on what is now the Eastern Cape, mystical prophets, like Ntsikana, rose to warn the Xhosa nation of impending trouble.

As the offensive of white colonialism spread and tightened, so were the prophecies, taking a more militant tone from the likes of Nxele and Mlanjeni (River-One). It eventually spilled over under the influence of Mhlakaza who coached her niece, Nongqawuse, to drive the Xhosa people to national suicide by calling upon them to slaughter their cattle—and thereby the means of self-sustenance—in the vain hope of better times to be brought by the “river people”.

In actual fact, the modern Xhosa spirit of resistance takes its modalities from the spirit of Ntsikana and Nxele.

Nxele, on the other hand, was militant, aggressively independent and averse to foreign influences—even though he was trained by British missionaries around Grahamstown.

Nxele’s spirit took its mode from the aloof ruts of traditional fundamentalism, so the colonial powers incarcerated him on Robben Island where he drowned trying to escape.

Meanwhile, his contemporary Ntsikana died of natural causes without ever coming into violent conflict with the colonialists, though he sometimes criticised them in strong verbal terms.

He advised the Xhosa nation to adopt the Western civilisation’s spirit of enlightenment, recommending that his people “listen to the Book with a red mouth”, meaning the Bible.

But he warned against the mercantile tendencies and greed: “Iqhosha elingenamgxuma”, meaning money in the form of coins, which he likened to buttons without holes.

What is clear is that the people whom Ntsikana converted did not allow their traditional rootedness to blind the faculty of their progressive judgment, even as they understood the prejudice of the new spirit against their traditional ways.

Those who fell in with Ntsikana’s progressive thinking (there were many since he was a very charismatic preacher and artistically adept in music and drama) eventually became the first natives to be educated in the Eastern Cape, indeed in all of the southern tip of Africa. They had to make hard choices about what the newly-arrived Christians regarded as regressive traditional culture, beliefs and customs.

Ntsikana’s group accepted the message of Christ but were suspicious of Western tendencies which they classified as narrowminded and vulgar. They fell under tremendous stress, being criticised by other Xhosas for being amagqobhoka (those who turn themselves inside out by adopting the ways of white people).

But in the long run they were the people who kept the fire of the nation’s sense of dignity and liberation burning. They were among the first black educated class from missionary schools, like Lovedale, and what was to become the University of Fort Hare, where the likes of Nelson Mandela and Oliver Tambo were later educated.

To find their proper political beginnings you have to go as far back as 1887, the year of the Thung’ umlomo (Stitch the mouth), that saw the start of the first black consumer boycott.

After the usual political shenanigans, elements of power mongering, jealousy, stupendous purging and rancour that saw the SANNC becoming the African National Congress (ANC) at Bloemfontein in 1914, many of these men withdrew and eventually dropped off the political scene to concentrate on their intellectual and religious pursuits.

Across the historical ages, the spirits of Ntsikana and Nxele represent themselves in different forms of South Africa’s liberation struggle.

They are discernible even in present era of South African politics; sometimes in a mix, sometimes one of the two prevails.

Mandela’s political youth, that saw the founding of Umkhonto WeSizwe, derived from the militancy of Nxele’s spirit, while the later part of his presidency can be regarded as being influenced by Ntsikana, with its more reconciliatory tone while striving to assimilate what is best of both African and western culture.

The riots of 1976 and their recurrent reawakening, for example in last year’s #RhodesMust Fall campaign, were more influenced by the militancy of Nxele.

When you mix both the spirit of Nxele and Ntsikana you probably come out with something that has been called “Negritude” by the likes of Aimé Césaire, but what here we’d refer to it as Stephen Biko’s seeds of Black Consciousness .