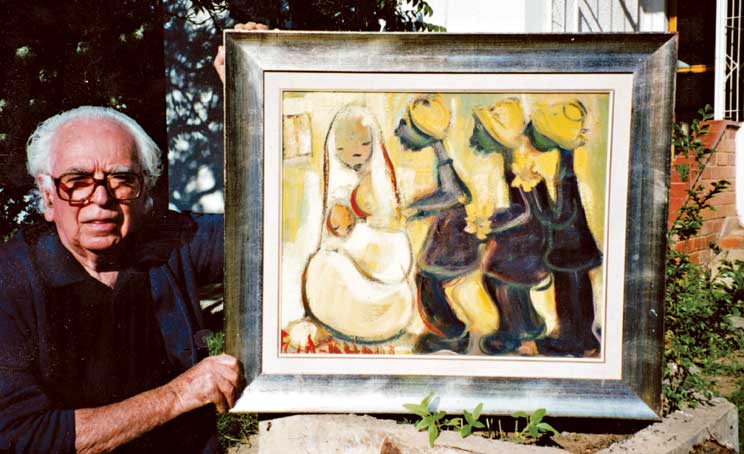 Fr Frans Claerhout OMI with one of his paintings. The world-renowned artist who sold his paintings to finance the work in the mission he ran in the Free State, died ten years ago on July 4.

Father Frans Claerhout was not expecting us at his home at Tweespruit in the Free State that day. Yet, when Fr Ignatius and Fr Jim arrived with me at his mission house way back in 1988, we were immediately invited to lunch.

Fr Claerhout took us through to the dining room and, as we sat down, held his hand over the table and said: “Lunchtime, thank God.  Let’s eat.”

The noted artist and Oblate of Mary Immaculate priest was in his late 70s then, but he was as busy as ever looking after his flock, the majority of whom were poor Basotho.

He needed money to minister to their needs—and he did so with a few strokes of his pen, painting images of nature, children and the Holy Family.

The two Oblate priests with whom I was travelling that day were on the way to Lesotho where their confrere Fr Joseph Gérard was to be beatified a few months later by Pope John Paul II. They knew their fellow Oblate Fr Frans would welcome us. And he certainly did.

We laughed and chatted over lunch as he relayed anecdotes of his life in the Free State.

Living on his own as he was, Fr Claerhout might have been a lonely man. Instead he filled his day by serving his people, painting when he had time—and using the proceeds of his rare talent to help the poor.

The day I met him, we were on our way to check arrangements for the beatification in Maseru. Was everything going according to schedule? Busloads of South Africans were preparing to take part in Holy Mass that September.  Would tiny, landlocked Lesotho cope with the crowds? Our quick stopover at Fr Claerhout’s home for lunch with two Reef-based Oblates, proved to be a highlight of our excursion, his welcome enthusiastic. He was a warm-hearted jovial man, a painter priest who loved people

We had arrived at his mission at about midday to find hundreds of small children playing in the grounds of a nursery school.  It was just one of Fr Claerhout’s many community initiatives which he ran with the help of local mothers.

“But they are nearly all poor people,” I ventured. “How do you cope? There can’t be much in your collection plate on Sundays?”

“I’ll show you,” the priest said.  He led his two fellow priests and me to his “studio”, a room where he worked as an artist. He pulled out a selection of his paintings and gave us each some of his originals. The simple lines of his works—many with a religious theme, some depicting colourful pictures of flowers, some simply a few black strokes—all were magnificent.

“I sell these to anyone who wants to buy one,” he said. “Art pays the bills.” 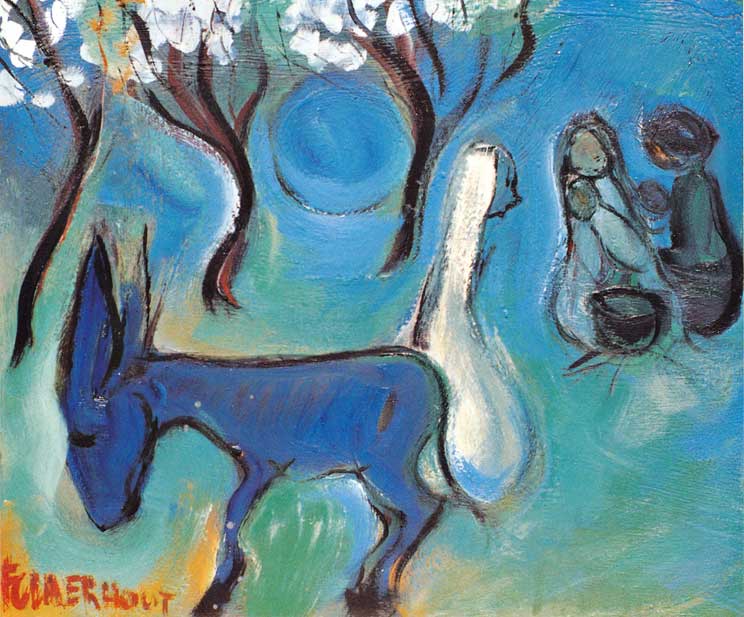 The Flight into Egypt is depicted in a painting by Fr Claerhout.

Much as I appreciated his gift, I did not realise then what a gift he had given me

His paintings often featured a Madonna and child. The sheer simplicity of his work attracted buyers from round the world.

Today his paintings grace buildings, galleries and lounges in virtually every corner of the globe. His work has won him international fame, those simple strokes of his paintbrush appreciated everywhere. Many sold for thousands of rands.

In his lifetime he made, as an artist, all the money he needed to fund a nursery school, build houses for the poor, as well as churches, chapels, halls and—inevitably—creches for children.  He bought vehicles for the transportation of the old and infirm, and made donations to the Oblates of Mary Immaculate. Fr Claerhout travelled a great deal, attending the opening of exhibitions of his work in Europe and the United States, including his last one in Chicago.

But, despite his cheery good humour, he was not a well man. He took ill soon after a trip to Europe where it was feared that he was dying of a heart-related ailment. He insisted on returning to the Free State where he was treated by a Dr Kleynhans in Bloemfontein.

He had a heart bypass and recovered but was often ill with lung problems in the years that followed. In fact, he had many encounters with death, but despite health issues always had time for people, particularly his beloved Basotho whose language he spoke, and the local Afrikaans population who identified with his Flemish background.

When he died on July 4 2006, aged 87, tributes from around the world poured in to the Oblates Mission House in Bloemfontein where he had spent the last months of his life.

But to his flock at Tweespruit, where the Belgium-born priest spent much of his life as a missionary, he was loved as a priest who went beyond the call of duty.

I spent no more than 90 minutes with him that day in Tweespruit before we continued to Lesotho—but the warmth of his personality has stayed with me throughout my life, the painting he gave me a living memorial of this wonderful priest.