Pope: Christians can’t ignore suffering and have a clear conscience

Turning your head away from the suffering of others is a grave sin, and simply saying some prayers or going to Mass does not make a good Christian of someone who ignores those in need , Pope Francis said. 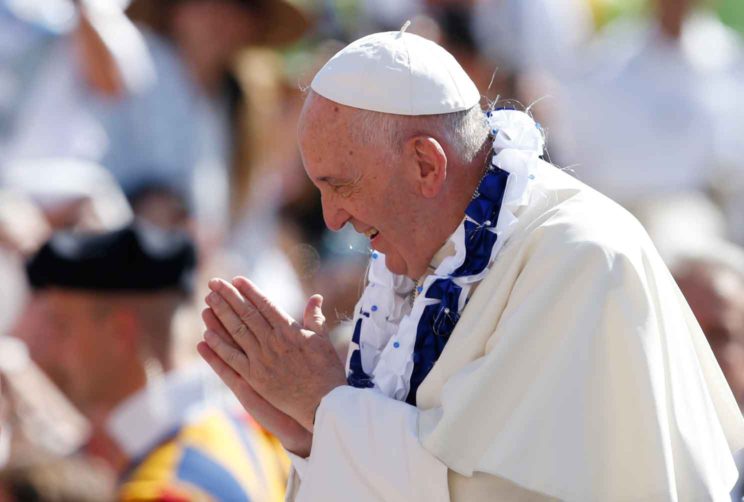 Pope Francis wears a lei given by a Missionaries of Charity nun in the crowd as he arrives for an audience in St. Peter’s Square at the Vatican. The audience was for people engaged in the works of mercy and for pilgrims in town for the canonisation of Blessed Teresa of Kolkata. (CNS photo/Paul Haring)

The plight of those who suffer in the world today is a modern-day Calvary that “spurs us on to offer ever new signs of mercy,” the pope said Sept. 3 at a special audience for people engaged in the works of mercy, as well as for pilgrims in Rome for the canonisation of Blessed Teresa of Kolkata.

“I will never tire of saying that the mercy of God is not some beautiful idea but rather a concrete action,” Pope Francis said. “There is no mercy without concreteness. Mercy is not doing something good while passing by; it means involving yourself there where there is evil, where there is sickness, where there is hunger, where there is human exploitation.”

Making his way around the square in his popemobile, the pope invited six blue-shirted girls from a choir to ride with him.

The special audience began with testimonies. With his voice breaking with emotion, Roberto Giannone, an Italian, told about how he served time in prison for crimes he didn’t commit. His experience, he said, led him to dedicate his life to visiting and assisting the imprisoned with the Society of St. Vincent de Paul.

The pope and thousands of pilgrims sat on the edge of their chairs listening to the testimony of Missionaries of Charity Sister Mary Sally, the sole member of Mother Teresa’s order who survived a brutal attack at a nursing home Yemen in March.

Four Missionaries of Charity and 12 other people were killed by uniformed gunmen, who entered the home the sisters operated for the elderly and disabled in Aden. A Salesian priest who worked with the sisters was kidnapped and his whereabouts are still unknown.

With shortages of food, water and medicine and the increasing violence going on around them in Yemen, Sister Mary Sally said her heart was “filled with greater love and enthusiasm.”

“We beg God to continue using our nothingness to make the church present in the world today through the mission entrusted to us by our Mother Teresa, even amid dangerous surroundings,” she said.

“The love of which the apostle speaks is not something abstract or vague,” the pope said. “Rather, it is a love that is seen, touched and experienced first-hand.”

The culmination of this love is Jesus’ death on Calvary, a love that can be seen today in those who suffer due to poverty, sickness and evil, he said. The church “cannot look away and turn her back on the many forms of poverty that cry out for mercy,” he said.

Pope Francis thanked Catholic volunteers, saying their work in giving “shape and visibility to mercy” makes them “among the most precious things in the church.”

By making those who suffer feel loved, the volunteers are the “extended hand of Christ” and defy the individualism in today’s culture that causes people to think only of themselves and “to ignore the brother or sister in need.”

“The world stands in need of concrete signs of solidarity, especially as it is faced with the temptation to indifference,” the pope said.

On the eve of the Sept. 4 canonisation of Mother Teresa, the pope called on the volunteers to follow her and other saints in making “the love of Christ visible.”

“Let us also imitate their example, as we ask to be humble instruments in God’s hands in order to alleviate the world’s sufferings and to share the joy and hope of the resurrection,” the pope said.

At the end of the audience, Pope Francis led the volunteers in a moment of silent prayer for the “suffering, for those who are discarded by society and for the volunteers who go in search of the flesh of Christ.”

The pope also prayed for those “who look the other way; who in their hearts hear a voice that says, ‘It is not my concern; I don’t care.'” By Junno Arocho Esteves Catholic News Service