Do Something Beautiful for God 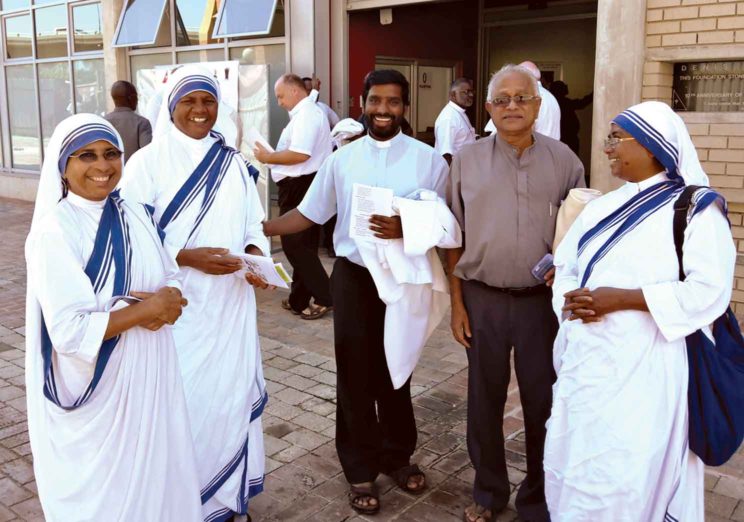 A group of Missionary of Charity Sisters from Chatsworth in Durban visit the city’s Denis Hurley Centre.

19 years after Mother Teresa’s death, her name remains short-hand for a model of self-sacrifice, of love for the poor and of care for the dying.

One might say, “She’s such a Mother Teresa”,when applauding a friend or relative; though it could also be said slyly as a way of trying to cast doubt on someone’s good works. Either way, the reference is instantly recognised — Mother Teresa has no less global awareness than Coca Cola or McDonald’s.

Her life has made a lot of people want to claim her by association. As Catholics we want to hold her up as one of ours; for religious she can be the pin-up for vocations promotion; for the sub-continent she became a fellow-Indian and was given a state funeral; for Albanians she is their most famous export (they even named an airport after her!).

Mother Teresa captured this once in her words when asked how she would describe herself: “By blood, I am Albanian; by citizenship, an Indian; by faith, I am a Catholic nun. As to my calling, I belong to the world. As to my heart, I belong entirely to the Heart of Jesus.”

In declaring her a saint, the Church is holding her up as an example for others to follow. In her case this is merely formalising something that has been true for a long time.

But often the response to her as a model can have unintended consequences. One is that her heroic sanctity puts people off even trying. “Oh I could never be Mother Teresa!” or “To do that I’d have to be a second Mother Teresa”. These are common lines that are readily used by people who know that they ought to do some good work and are looking for an excuse or an explanation why they cannot. We feel that we cannot be heroes ourselves and so we don’t even need to try.

On the other hand, many people have been inspired by her and have literally sought to follow in her footsteps.

The clearest example of this is in the religious order that she founded, the Missionaries of Charity.

In 60 years, this grew to over 4000 women (and some men) dedicating their lives to working with the poorest of the poor all around the world, including here in South Africa. But she also inspired many young people to turn up in Calcutta (now Kolkata) to volunteer to tend to the sick and dying.

This impulse — to do something dramatic to help others — is a good one and one we see in many young people, especially those growing up in comfortable families in Europe and North America, and even in South Africa.

They want to give up a month or a year, travel across the globe, and “do their bit”. Sometimes they have useful applicable skills: trainee nurses and doctors, English teachers and so on. Often they only have enthusiasm and perhaps a misplaced belief that a committed but unskilled (white) person can solve the problems of poor (brown or black) people in just a few weeks.

I have a 17-year-old god-daughter who recently went to Bolivia to help build a school. I was intrigued since, as far as I know, she has never before in her short life shown any aptitude for construction — whereas I am sure there are many in the village she visited who do!

There are many examples of sincere, selfless service by such young people. But at their worst, such initiatives can be “humanitarian tourism”, young people wanting to travel the world and gain experiences with more focus on their own needs than on those of the community they are visiting.

Afterwards they all say with pride that their lives were changed — and I am sure that is true — but that only reinforces the sense that it is about them, not about the people in whose communities they are guests.

Every squeaky clean American who works in an Aids orphanage for two weeks feels they have helped Africa — but does the abandoned child really get an experience of love and stability from a constant rotation of foreigners coming in and out of their lives like a revolving door?

Mother Teresa discouraged this sort of response to the poor. When addressing the Jesuit university in Pennsylvania she urged the students to “know poor people in your own home and local neighbourhood”. When asked, on receiving the Nobel Peace Prize in 1979, what we can do to promote world peace, she answered simply: “Go home and love your family.”

Sadly, we live in a world where people are more likely to cross the world to help someone than they are to cross their city or even cross the street.

The Denis Hurley Centre — like many other community-based Catholic charities — is a good counter-example to this. We manage to feed 300 people, five days a week, with most of the food donated by local individuals and businesses, and almost all of the work done by volunteers from schools, parishes, mosques, universities and groups of friends.

These are people who are inspired by the “heroic virtue” of saints like Mother Teresa but not put off by the scale of the problem. They are not about to win Nobel prizes or become world icons of selfless love.

Instead, they generously give from the time and the resources that they can afford to give and — most importantly — open up their hearts for an encounter with people in need.

We are all called to make our contribution. We do not need to cross the world to do so; we do not need to give up everything for the poor; but we do need to do something! In Mother Teresa’s famous phrase, “Find your own Calcutta”.

And that way, to quote the saint again, we can “do something beautiful for God”.