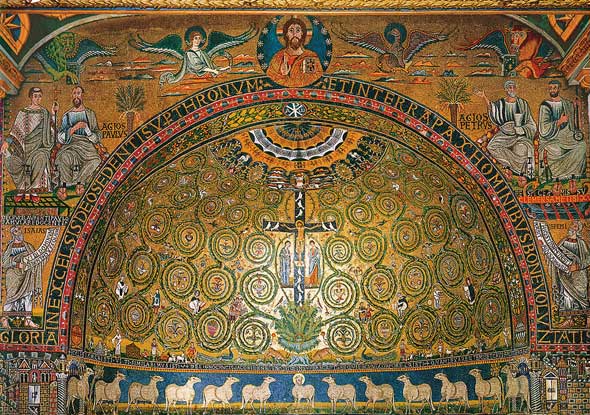 The 12th-century mosaic of the crucifix in the apse of Rome’s basilica of San Clemente.

As we prepare to celebrate the feast of the Exaltation of the Cross on September 14, my mind turns to my favourite crucifix: a 12th-century mosaic set in the apse of the church of San Clemente in Rome.

It is a work inspired by the words of Jesus about his being the vine and our being the branches. The vine is the source of life for the branches. The crucified Jesus in San Clemente brings life and unity to everyone and everything you see in the mosaic.

His cross is a throne – a throne of life and victory. At the top of the mosaic a hand emerges from heaven and crowns the crucified Jesus with a laurel wreath. God has accepted the self-sacrificing love of Jesus, the great High Priest. At the foot of the cross, a small snake slithers away to express evil being banished by that sacrifice.

Christ has brought new life and real salvation. That is expressed by the lively doves placed along the cross. This life and salvation are also pictured by the two deer which drink water at the foot of the cross.

There’s a whole panorama picturing a world redeemed by Christ and his cross. A woman feeds her chickens; a bird nourishes her young; a man tastes some wine; and a bunch of angelic cherubs gambol with joy. A richness and variety fill those scenes. They point to Christ gathering all creatures to himself and presenting them to the Father.

That descent and ascent symbolises, of course, how the Son of God stepped down into our world and humbled himself in suffering and death, only to be raised from the dead and return gloriously to the presence of God where he intercedes constantly on our behalf.

The whole scene in that apse of San Clemente in Rome pulsates with vital activity. Life flows out from the cross. And, in turn, all life is gathered together by the cross and becomes a supreme gift of praise offered to the Father by Christ, our great and eternal High Priest. Updated from 2014

Fr Gerald O’Collins is a Jesuit priest, academic and author based in Melbourne, Australia. He presented the Jesuit Institute’s Winter Living Theology course in 2010.