Piecing thrown-away African girls back together 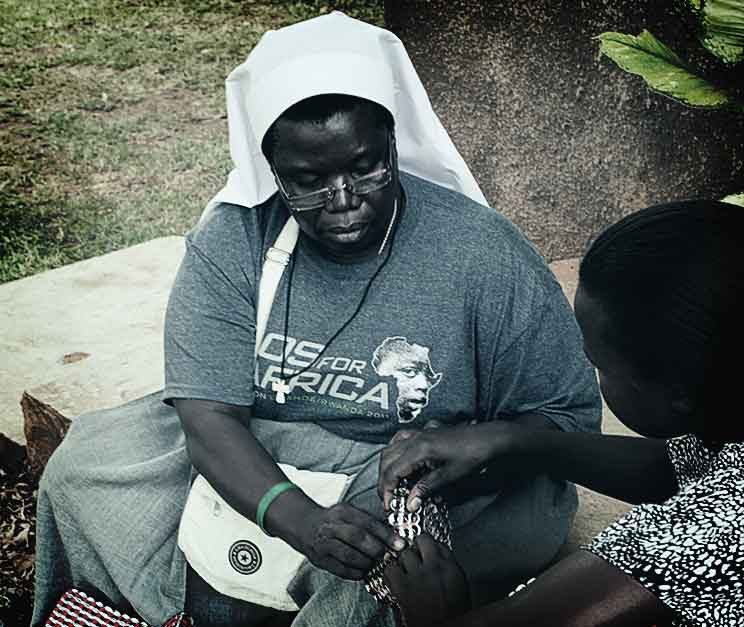 Sister Rosemary Nyirumbe teaches young women how to make accessories out of soda can pull-tabs at the vocational center she runs in northern Uganda. Sister Nyirumbe, a member of the Sisters of the Sacred Heart of Jesus, teaches former child soldiers marketable skills so they can rebuild their lives. (CNS photo/EMI, Italian Missionary publishing house)

“I feel like a model,” she said, smiling, as she turned to show off the bag – the handiwork of former child soldiers who had been abducted, raped or tortured by the Lord’s Resistance Army in northern Uganda.

Made out of discarded soft-drink-can pull tops and crocheted coloured thread, the bags and similar accessories are sold around the world through the support of the Sewing Hope foundation, a U.S.-based organization that supports Sister Nyirumbe’s work rescuing and teaching marketable skills to the women and children once victimized by Joseph Kony and his rebel army.

It’s significant, she told journalists, that the items they create are made out of thrown-away materials, because the girls had been thrown away, too. “Now after working through their lives, after being accompanied, after being accepted, they’re beautiful again, just like what they produce,” she said.

A member of the Sisters of the Sacred Heart of Jesus, Sister Nyirumbe was at the Vatican as part of a monthlong trip to Italy speaking to different organizations and religious orders about her work. She also met Pope Francis and received a blessing during his Sept. 20 visit to Assisi.

First published in English in 2013, the book about her life and work, “Sewing Hope,” was just translated into Italian. The new translation and speaking engagements, she said, are all part of her mission to make sure people “have no excuse” to say they never heard about northern Uganda and what happened there.

Abducted young women, who had been used as soldiers or sex slaves, and their children are still struggling to overcome the stigma and trauma of the LRA’s two-decade reign of terror in the north, she said.

The rebel army employed tactics meant to create lifelong scars and repercussions, she said. For example, newly recruited children were often forced to commit atrocities in their own villages. This meant not only killing loved ones they would have turned to for help, they now were feared and shunned by the whole village and extended family – thus widening the circle of shame and alienation.

Raping the girls was another tactic that meant the children born would be rootless outcasts. Having no identifiable father spells disaster in a patrilineal society, she said, where children’s future – their place in society and the right and access to land and assets – depends on the identity or presence of the father.

Helping these women and children find hope and a means to survive is the heart of Sister Nyirumbe’s work.

Fortified by “prayer and a cup of coffee,” she’s been running the St. Monica Tailoring School outside Gulu, Uganda, for 15 years and is developing other vocational schools and orphanages in other areas once ravaged by LRA violence.

Sister Nyirumbe’s work in the epicentre of Uganda’s tragedy has reached a rarely achieved level of outside attention and support, especially in the United States.

A book and documentary, also titled “Sewing Hope,” were made about her; she was honoured with a CNN Heroes award in 2007, and Time magazine put her on its “100 Most Influential People” list in 2014.

Asked how she was able to attract so much interest when so often the heroic work of women religious remains hidden from public view, she said, “everything happens starting with one person.”

Normally, she said, people would not have heard about her “because I am African.” It took three young U.S. filmmakers to alert the world in 2003 about the LRA’s use of child soldiers with their documentary “Invisible Children.”

“Who would bring something about me back to America and to Italy?” she said.

It’s all right to feel there are too many problems to tackle, she said, but everybody must realize they can do something to make another person’s life better.