Silence Where Words Fail You

The silent grief when faced with unimaginable suffering at the hands of evil. The haunting image of the solitary figure of a seemingly broken Pope Francis on his visit to Auschwitz-Birkenau in Poland during World Youth Day is something that surely will be enmeshed in his legacy of Mercy. 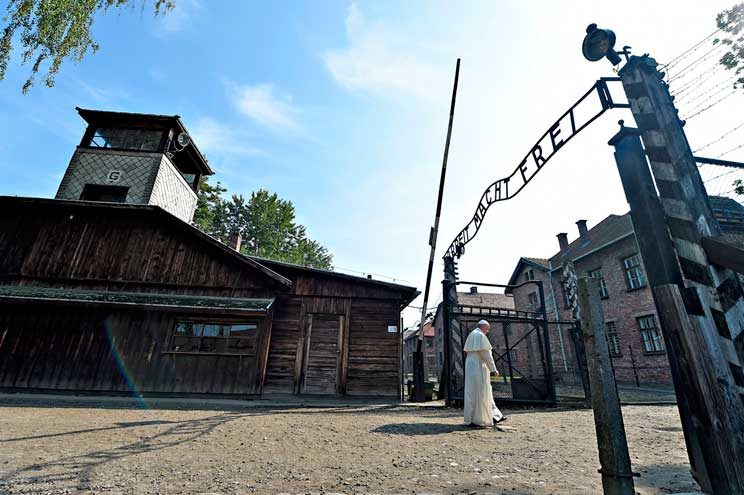 Though he called himself a voice of victims everywhere, Wiesel, who died on July 2, had his shortcomings. For one, he was blind to the sufferings of the Palestinian people against the legalised terrorism of the Israeli state in the occupied West Bank and in East Jerusalem

Still, in his book Night, Wiesel explores, with great insight, what he calls “a wounded faith”. Others have termed it the “Job syndrome”: a believing person’s accusation of God.

Wiesel speaks of Silence as a witness, and explores what he calls the archaeology, theology and history of silence. We know well the history of silence in this country — today you can’t find anyone who supported apartheid, yet it stood triumphantly for almost 50 years. In a few years’ time, perhaps nobody will admit to having been a Zuma supporter.

Wiesel speaks more hauntingly about the silence of goodness before the mystery of evil. This silence may be self-imposed out of fear, or complacency, or laziness, and so on. In the end, it all becomes complicit in evil because it feeds and is promoted by the silence of good men.

But there is another kind of silence, as seen in Gethsemane, that comes from the strength of goodness refusing to be drawn into the tactics of evil — refusing to resist evil by evil.

I felt what I would term the “rage of silence” on a visit to the village of Nyarubuye in the Rwandan province of Kibungo. I was younger then, so my blood raged high against the fallen nature of things.

A peat-frothed river snakes the foothills, creating smoky nooks and lush swamps along it. Village women with children strapped on their backs, and thatched crowns on their heads balance their load, singing softly as they walk. Nothing about the village looks temping to the reaper’s scythe.

As you climb the hill you remember another man who climbed Calvary wearing a crown of thorns, another victim of the fallen nature of things. Nothing here suggests that you are about to have an encounter with gruesome scenes where numerous people died as they hugged the church doors of betrayal.

I’ve never been to Auschwitz, but I’m sure those dreary factories of death, somehow, communicate their deeds from afar. Nothing does that in Nyarubuye. All you find is haunting ordinariness, a bleeding downpour of the humdrum without trace of the hanging pall of depression you would expect in a place with such a gruesome history.

At the crown of the hill, where the church of death stands, you become overwhelmed by incomprehension. Not sadness, not anger, not revulsion nor anything like that. Just utter incomprehension, an inability to penetrate the situation. Disbelief, if you like!

You try to comprehend how people killed those who were known to them, more or less, all their lives using machetes without remorse or guilt, just because their victims were of a different ethnic group. This incomprehension is also what Pope Francis’ silence at Auschwitz communicated to me.

Inside the church on top of that hill, the essence of death was still naked.

I didn’t believe it initially, but there’s great wisdom in not marking such places with sculpted memorial illusions or something like that. They must remain bare, stripped of our lies and denials to testify what we are capable of — to what has happened since Calvary: bodies left to decompose where they fell; pews draped in black mummified human remains; everything melting down to the floor; decapitated children’s skulls. Let it all remain, no matter how overwhelmingly piercing the sight of it all is.

We must face up to what we are. So be it if we’re blinded into despair by it. To quote Nietzsche: “Does Zarathustra want to rob the Devil of his morsel?”

I once read A Memoir of Iris Murdoch by John Bayley, her long-devoted and suffering husband, because of her infidelities. Somewhere in the book, Bayley says: “Rubbish becomes relaxing where there’s no will to disturb it.” I linked it to Keats’s poem “Hyperion”, in which the poet writes: “But where the dead leaf fell, there did it rest…”

Other people have to live with their own horrible nights. If you have been lucky enough to be spared that, be careful with your words or silences, lest you  feed what haunts their lives.

Don’t ask people to forget and move on, especially on issues you don’t even fully comprehend. Learn humility and sympathetic silence where words fail you.