14th Century Palace of the Popes

The Palais de Papes is a historical palace in Avignon, southern France, one of the largest and most important medieval Gothic buildings in Europe. Once a fortress and palace, the papal residence was the seat of Western Christianity during the 14th century. 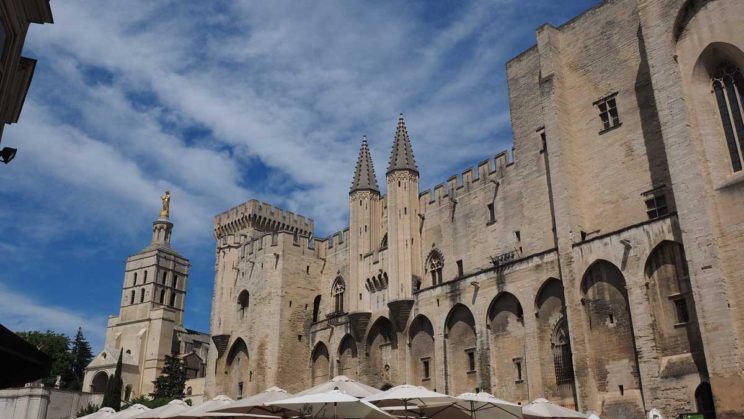 The site, on a natural rocky outcrop at the northern edge of Avignon, overlooking the river Rhône, was that of the old episcopal palace of the bishops of Avignon. By the time of its completion, it occupied an area of 11,000 m2.

Avignon became the residence of the Popes in 1309 after violent chaos in Rome at the time. The popes departed Avignon in 1377, returning to Rome, but this prompted the Papal Schism during which time the antipopes Clement VII and Benedict XIII made Avignon their home until 1403.

The Palais remained under papal control for over 350 years afterwards, but it gradually deteriorated despite a restoration in 1516. When the French Revolution broke out in 1789, it was already in a bad state when it was seized and sacked by revolutionary forces.

In 1791 it became the scene of a massacre of counter-revolutionaries, whose bodies were thrown into the Tour des Latrines in the Palais Vieux.
It survived the Napoleonic wars and military occupation by the Third Republic. The Palais was vacated in 1906 and has been a museum ever since.

The Palais is today a palace of culture and primarily a tourist attraction, attracting around 650,000 visitors per annum, putting it regularly in the top ten most visited attractions in France. (Source:Wikipedia)