Sr Helen Prejean: We’re Worth More Than Our Worst Acts

Sr Helen Prejean’s mission is to the most despised of American society: inmates on death row. She was interviewed by ALICIA VON STAMWITZ. 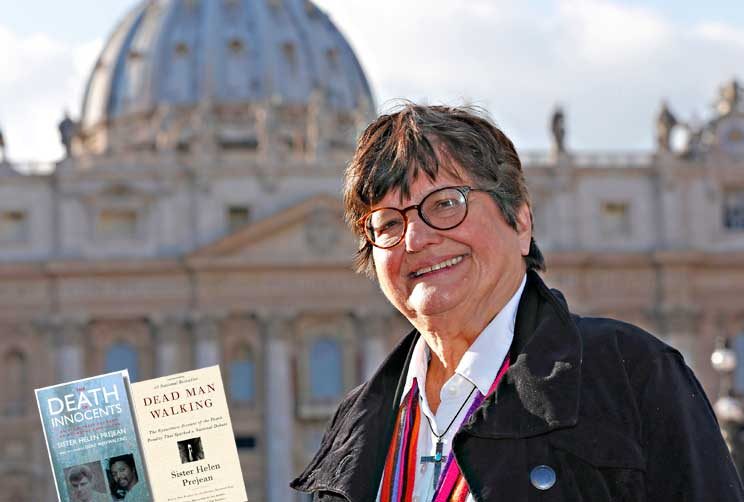 Sr Helen Prejean, who has worked in prison ministry and against the death penalty for decades, is pictured in St Peter’s Square at the Vatican in January. Inset are two of her books, Dead Man Walking and The Death of Innocents. (Photo: Paul Haring/CNS)

Sister Helen Prejean, a US religious of the Congregation of St Joseph, is one of the world’s best-known anti-death penalty activists.

Her book Dead Man Walking was turned into an acclaimed 1995 film of the same title featuring Susan Sarandon and Sean Penn.

In this interview, she talks about racism, human dignity and a broken criminal justice system.

For 20 years, you were an English and religion teacher at an elementary school in the suburbs of New Orleans. Why did you leave that life and move to an inner city housing project?

In 1965, Vatican II called religious orders to go back to the gospels, to go back to the reason we were founded. So we sisters started having meetings about who we were and how we had to be on the side of the poor.

I wasn’t a bad nun — I was leading a good, upright life as a sister and a citizen — but I didn’t know any real people who were poor or hungry. I only knew about poverty and hunger.

Then God woke me up. That’s the first part of my journey. God called me to get out of the suburbs and to move into the inner city. I moved into the St Thomas housing projects in New Orleans, and it was like I’d moved to another country.

I sat at the feet of my African American neighbours and they began to teach me about the “other” America.

Their stories broke my heart. When you are in the presence of people who are suffering, that’s what changes you. Because you can know about injustice, and you can know statistics, but until you actually see what is happening you can’t know how privileged and protected and cushioned you are.

How did you initially become involved with death-row inmates?

One day in January 1982, right there in that housing project, a friend said, “Hey, Sr Helen, you want to be a penpal to somebody on death row?” And I said, “Sure.”

I was thinking, I’m an English major, I could send him some poems. I never dreamed they were going to execute this person, Elmo Patrick Sonnier.

Sonnier was a convicted murderer of two teenagers, sentenced in April 1978 to be executed by electrocution at the Louisiana State Penitentiary. What do you remember about the night of Sonnier’s death?

It happened in the early morning hours of April 5, 1984. Everyone else had to leave the death house except me, because I was his spiritual advisor.

When I came out of the executing chamber that night, the prison vehicle brought me to the outer gates. The sisters in my community were standing there waiting for me. I was so cold. They put a coat around me. Then I threw up.

I’d never watched a human being be killed, right in front of my eyes.

I don’t mean to make Pat Sonnier a hero — he had committed an unspeakably terrible crime, and I was horrified at the crime — but he was a human being. Is human dignity only for the innocent? Is there not dignity in a guilty life?

All human beings are worth more than the worst thing we’ve done in our life; is that not the message of Jesus to all of us?

I read the papers the next day, and they said things like, “Justice was done!” and “We got another one of those criminals!” Everybody in Louisiana and their cat was for the death penalty in 1984.

Worse still, statistics showed that the more people went to church, the more strongly they believed in the death penalty.

At first, I didn’t know what I was going to do. But then it was clear as a bell in my heart. I realised that the American people were never going to get close to an execution, but I had been a witness; I had seen it, and so I had to tell the story.

I began giving talks to anyone who would listen, and I started learning things about the death penalty.

What kinds of things?

I learned that it’s only poor people who are selected for the death penalty.

I learned that race is a huge factor too, especially in laying the groundwork of death penalty cases, because the system is still so white. The judges are white. District attorneys are white. Juries are white.

In New Orleans, 90% of our homicide victims are people of colour, but there’s not much outrage by government officials when a person of colour — Latino or black or Native American — is killed, and the death penalty is seldom sought.

If the life is negligible, the death is negligible. It’s true what the Black Lives Matter activists say: when it comes to a death and the race of a victim, we act as if black lives don’t matter.

You’ve acknowledged that you made a “big mistake” when you first became involved in this work. What was it?

I didn’t know what to do with the victims’ families. I didn’t reach out to them in any kind of way, and when we finally met, they were just furious at me.

I deserved their anger. I hadn’t written them a note, I hadn’t tried to call just to say, “I’m so sorry about your child.”

Lloyd LeBlanc [father of murdered teenager David LeBlanc] took me through his journey. He explained the pressure he was under.

He said: “Everybody was saying to me, ‘Lloyd, you gotta be for the death penalty or it’ll look like you didn’t love your boy’. I pictured putting both of those men [Sonnier’s brother, Eddie, was also convicted] in an electric chair and pulling the switch real slowly so they would feel pain like we were feeling pain.”

But Lloyd told me he didn’t like what was happening to him. He was angry all the time, and he was losing every bit of kindness that had been in him. So he set his face to go down the road of forgiveness. He’s the real hero of the book Dead Man Walking.

It seems to me that your work opens a way for all of us: not just activists. Basically, you seem to be saying: Get involved. Get educated. Once you see what’s really happening, you will be converted.

Exactly. And my other book, The Death of Innocents: An Eyewitness Account of Wrongful Executions, gets into a lot of that — how the law works. Because before I educated myself, I thought: “Well, if this is the law of the land, if it’s law, it must be right.”

That’s where most of us go. We legalise and legitimise the state violence. But you have to take a closer look. You have to get into those laws, and you have to see how they actually work.

So, boy, when you dig into justice, you are dealing with reality, with what’s really happening on the ground. And that’s part of faith: to make faith real. It’s really incarnational.

There’s a quote from St Basil, from the 4th century, that says it all. He said: “Annunciations are frequent, incarnations are rare.”

You met with Pope Francis in January this year, and he has been speaking out against the death penalty recently. Is that due in part to your influence?

I don’t want to press that too much, like, “I’m so Catherine-of-Siena, I influence the pope.” There are a lot of bubbles in the pot, and many of us are dialoguing about the death penalty together and growing together: that’s what sensus fidelium means for Catholics.

We’d been sending Pope Francis’ secretary all kinds of stuff on the death penalty, and I think it helped sensitise him to the issues.

But when I first contacted the pope personally it was about Richard Glossip’s scheduled execution [Glossip was granted three successive stays of execution in September and October 2015]. I just wanted the pope to know Richard’s name, for dignity’s sake, and I wanted him to pray for him. And he did.

He also sent a letter to the governor [Mary Fallin of Oklahoma], asking her to commute the sentence. So when I went to meet the pope on January 21, it was to put into his hands a letter from Richard Glossip, thanking him for intervening and helping to save his life.