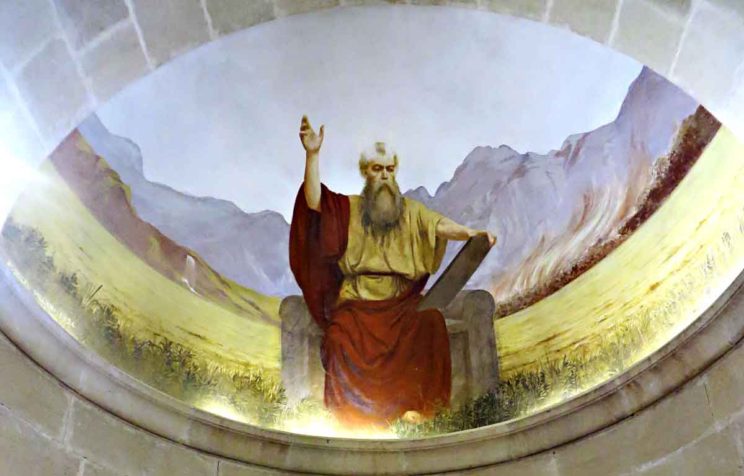 Moses is depicted in a chapel in the church of the Transfiguration on Mount Tabor, Galilee. (Photo: Gunther Simmermacher)

There are many lessons that we learn in the books of Exodus, Leviticus, Numbers and Deuteronomy. In this column we will focus on one aspect: the fact that Moses was an exceptional kind of leader.

In the closing chapter of Deuteronomy it is recorded: “Since then, no prophet has risen in Israel like Moses, whom the Lord knew face to face, who did all those signs and wonders the Lord sent him to do in Egypt… For no one has ever shown the mighty power or performed the awesome deeds that Moses did in the sight of all Israel” (Deut 34:10-12). Speaking directly to the Lord demonstrates a key characteristic of Moses: he was a man of faith; he was convinced that God would do whatever he promised to do.

What were Moses’ qualities as a leader? I will not talk about the miracles he performed at God’s command, such as stretching his staff over the sea and parting the waters, or striking the rock at Horeb and water coming out of it for the people to drink. I will focus on a number of natural human qualities.

Moses was a courageous person. When he saw the burning bush he went to investigate, and when God spoke to him in Exodus 3, Moses interrogated the Lord, wanting to know what his name was and how he would convince the Israelites about the mission given to him.

This also points to another special characteristic of Moses: he spoke directly to the Lord, and the Lord, in turn, spoke to him face-to-face.

Speaking directly to the Lord demonstrates a key characteristic of Moses: he was a man of faith; he was convinced that God would do whatever he promised to do.

When they were about to reach the Red Sea and saw that Pharaoh’s army was following, the Israelites began to complain to Moses that it would have been better to be slaves of the Egyptians than to die in the desert. To this Moses responded, “Do not be afraid…The Lord will fight for you; you need only to be still” (Ex 14: 13-14). And indeed the Lord fought for the Israelites, and the entire army of Pharaoh perished in the sea (14:27-31).

The faith that Moses had in God resulted in him being a loyal servant. His loyalty can be explained by comparing him with his brother Aaron.

When Moses went to Mount Sinai to get the stone tablets of the covenant law, the Israelites asked Aaron to make them gods other than the Lord, and despite the signs that the Lord had shown to him and Moses, Aaron made a golden calf for the people to worship.

When Moses saw the Israelites worshipping this false human-made god, he was so angry that he threw the stone tablets down and they broke to pieces (Ex 32).

Finally, the life of Moses shows that leadership is not a walk in the park. The Israelites, like any human nation, were a difficult people to lead—always complaining, often rebelling against him and God, but with humility and faith, Moses led them to the Promised Land.

And, like many liberation war heroes, he did not live to enjoy the fruits of liberation, but died on Mount Nebo across from Jericho.

To be Prepared for the Word of God