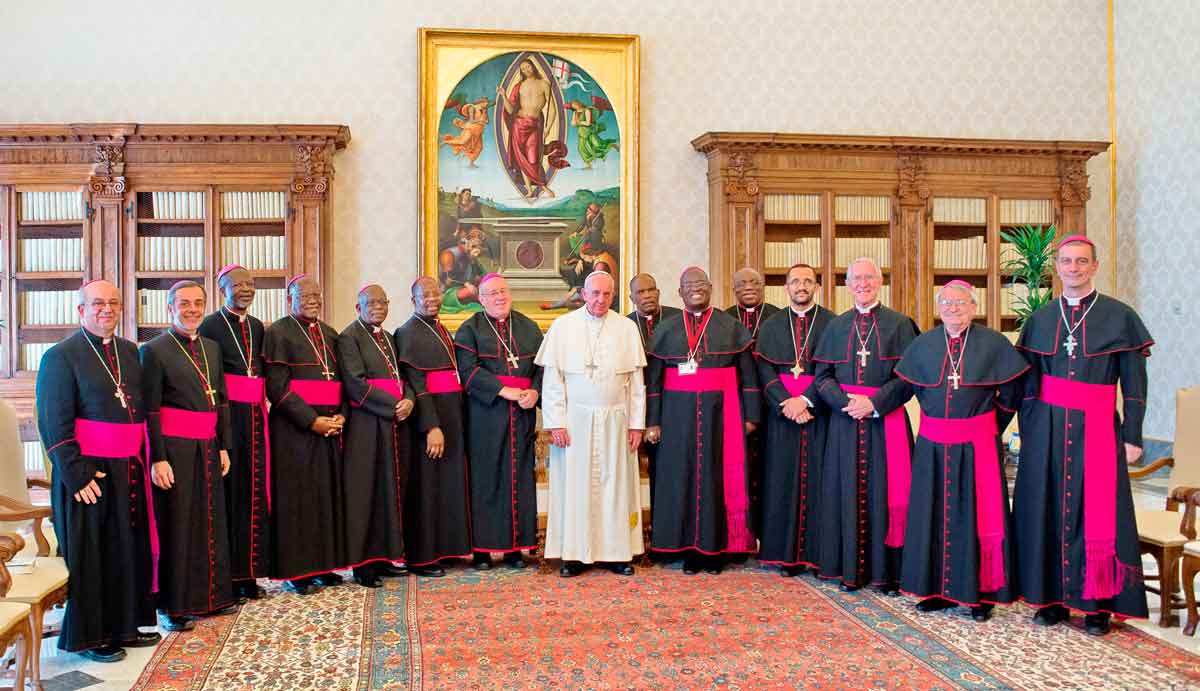 Pope Francis poses with bishops from South Africa during a meeting at the Vatican on April 25, 2014. The bishops were making their ad limina visits to the Vatican to report on the status of their dioceses. As Limina visits will resume this year. (Photo: L’Osservatore Romano)

Like Pope John Paul II did during the Jubilee Year 2000, Pope Francis suspended for the Year of Mercy the formal visits bishops from around the world make ad limina apostolorum — to the threshold of the Apostles, meaning Peter and Paul, who were martyred in Rome.

And, the pope told reporters, skipping a year of meetings means that he will travel less in 2017 and spend more time at the Vatican welcoming his brother bishops and discussing with them the life of their local churches.

The Vatican has announced that Pope Francis will travel to Portugal on May 12-13 for the 100th anniversary of the apparitions of Our Lady of Fatima. Plus, the pope said, he hopes to travel to Asia — specifically to India and Bangladesh — during the year and to Africa, although the countries have not been identified. The dates have not been set.

Before 2016 ended, though, more than 300 bishops from more than 20 countries already had dates set for their ad limina meetings with Pope Francis in 2017. The Irish bishops will kick off the series in January, followed by bishops from Serbia and other Balkan countries, and then by the first group of Canadian bishops.

According to the code of canon law, every five years “a bishop is bound to make a report to the Supreme Pontiff on the state of the diocese entrusted to him” and the report should be made in conjunction with the ad limina visit.

But it has been at least 20 years since the visits really were every five years. Most now occur every eight or nine years. With the growing number of dioceses — now more than 2850 — a pope would have to meet more than 570 bishops each year to hit the five-year target.

Brazilian Archbishop Ilson Montanari, secretary of the Congregation for Bishops, said that proposals to change canon law to reflect that reality are considered regularly. But once the law changes, it would set things in stone.

Someday, he said, a pope might be able to get things back on schedule.

Pope John Paul II, who was elected at the age of 58, “was a volcano at the beginning” and, even making long trips outside of Italy, “was able to do it”. He even celebrated morning Mass with the bishops, invited them in small groups to lunch, met with each bishop individually and then delivered a speech to each national or regional group.

Pope Benedict XVI began the practice of holding more informal meetings with groups of bishops on ad limina instead of individual meetings. Pope Francis has continued that practice, although like Pope Benedict, he also tries to grant the requests of individual bishops who feel a need for a private meeting.

While a few bishops still send in a report every five years, as canon law asks, Archbishop Montanari said most do so only in preparation for their ad limina visit, which is arranged by the congregation along with the Prefecture of the Papal Household.

The reports really are read, he said. “We use them to prepare for our meeting with the bishops, but also to prepare a memorandum for the pope on each diocese” to facilitate his meetings.

“This is work that is taken very seriously, especially because there is an attempt to look behind the words and numbers, behind the data, to see the living Church, which is the most important thing,” the archbishop said.

The goal of the ad limina visit, he said, always has been that it would be an experience of collegiality, “an exchange of faith and a witness”, he said. The world’s bishops have “never been ‘branch managers’” of the Church and the meetings should reflect that.

Before air travel became very common, the ad limina visits were a bishop’s rare occasion to come to Rome and to have direct contact with the pope, he said. Now, many bishops come regularly and, at the very least, have a quick word with the pope at the end of his general audience.

But the formal visits still have a special character, Archbishop Montanari said. They are occasions for an “exchange of gifts” with the bishops being “confirmed in their faith” and encouraged in their ministry by the pope and the pope being strengthened by the signs of how alive the Church is in various parts of the world.

“It’s a consolation” for the pope to see how the Gospel is being shared and lived because so often “the negative things are accentuated” in the news and in what people choose to speak about, he said. The bishops share problems with the pope, but they also explain “the enormous good the Church is accomplishing throughout the world”.

The ad limina visits also are an opportunity for groups of bishops from neighbouring dioceses to make a pilgrimage together; the visits include obligatory prayer at the tombs of Ss Peter and Paul, but usually also include Masses in the major basilicas of Rome and other prayer opportunities.—CNS