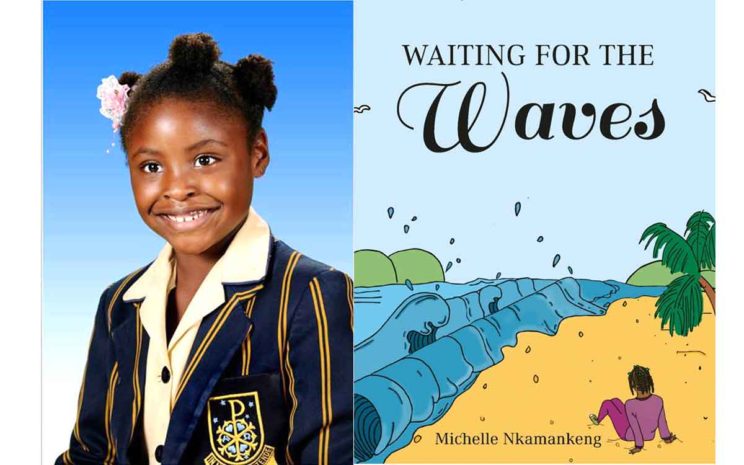 Seven-year-old author Michelle Nkamankeng in her uniform of Sacred Heart College in Johannesburg, and the cover of her debut book Waiting for the Waves.

A little Catholic girl is attracting international attention as the author of a book. MANDLA ZIBI spoke to Michelle Nkamankeng and her parents.

The actor William Shatner once said, “I’m surfing the giant life wave.” The same words could express the way life has become one exhilarating ride for little Michelle Nkamankeng since the publication of her first book.

And despite the title of the book, Waiting for the Waves, the pupil at Sacred Heart College in Johannesburg did not have to wait long for the tide of fame and adulation brought about by her literary achievement — she is only seven years old.

In the short three-month period since the news broke about her, the pretty, lively girl from St Francis of Assisi church in Yeoville, with her big smile, has gone from being an ordinary second grader to a real-life award-winning celebrity, having the world’s media hanging on her every word.

From SABC television to the BBC and CNN and almost every media house in between, Michelle has enchanted them all, even the troll-infested social media.

The next issue of the Guinness Book of World Records should list her as being the youngest African author and as part of the top ten youngest authors in the world. Indeed, arts and culture minister Nathi Mthethwa was so impressed that he could not wait for mere official confirmation.

“Congratulations to 7-year-old Michelle Nkamankeng for being the youngest African to make the global list of the top 10 youngest writers,” he tweeted.

At a glittering ceremony in Johannesburg in December, Michelle won a prestigious Mbokodo Award in the “Girl Child of Promise” category, the first of its kind in the six-year history of the Awards. The gongs are presented annually in partnership with the Department of Arts and Culture “to recognise women in the Arts, and to honour their immense contribution”.

In the foreword to Waiting for the Waves, Sacred Heart principial Colin Northmore notes: “For a child to believe in their own ability to create something that can bring pleasure to others and make a mark in the world, something that is the fruit of their own efforts, the product of agency and creativity, is remarkable.”

He wrote that the book should be judged on its own terms: “I do not believe that age should dictate what people are capable of; I encourage readers to judge Michelle’s work on the content and enjoyment they get from it.”

Idea for a first book

The 91-page Waiting for the Waves is about a little girl called Titi and her family who lived far away from the beach. One day they went to the beach but Titi was afraid of the waves. The book is about how her family helped her to conquer her fear.

According to Michelle’s father, Paul Nkamankeng, the story was inspired by an episode in her life. A similar incident occurred when the Nkamameng family one visited the sea.

“She asked me why everyone was standing and looking at the ocean. I told her that we’re all waiting for the next wave to come. Then she looked at me and said: ‘Daddy, you’ve just given an idea for my first book’,” Mr Nkamankeng told The Southern Cross.

To date, Michelle has written four books, with Waiting for the Waves being the first published in an envisaged four-part series in the next few years.

Born to an extended family of Catholics in Fourways, Johannesburg, Michelle is the third of four siblings—Sheena, Shawn, and Marion. Her father is an engineer and project manager. Her mother, Laurentine (known to her family and friends as Lolo), is Cameroonian and an entrepreneur. The family lives in Kensington.

Besides attending Catholic school, Michelle is also active in her local parish as a member of the Missionary Children Association, which is involved in charitable and spiritual activities aimed at supporting children who are less privileged.

“The Church has played a great role in shaping her down to earth, outgoing and caring personality,” Mrs Nkamankeng said.

In Michelle’s own words, the people “with the greatest influence in my life are my parents, especially my father”.

In her acknowledgements in Waiting for the Waves, she thanks “Almighty God for giving me the strength and knowledge to write this book” as well as her parents and sister, and “everyone who made it possible for this book to be published”. 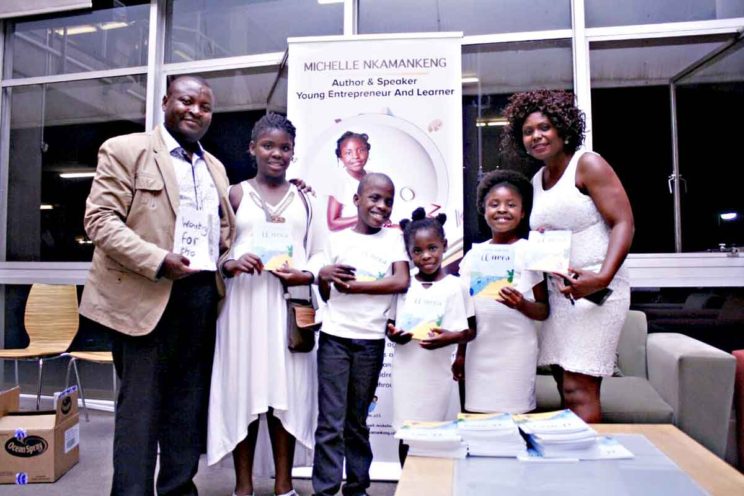 The Nakamankeng family at the launch of Michelle’s book: Father Paul and mother Laurentine with children Sheena, Shawn, Michelle and Marion.

On the surface, she is no different from your typical TV-watching, socially active seven-year old.

“I love playing with my friends and siblings, doing ballet, gymnastics, playing musical instruments and swimming. I also enjoy watching theatre, kid’s shows on TV and movies,” she said.

However it is obvious that her literary interests have developed at a more rapid pace than her age mates.

“I started to love reading books from an early age. At the age of 5 years I started thinking about writing my own book. However, it was only at the age of 6 years that I wrote my first two books, Waiting for the Waves and The Little Girl Who Believes in Herself,” Michelle told The Southern Cross.

“I like writing during my free time or when I feel bored. Especially after experiencing something exciting and memorable. Writing down my thoughts and experiences makes me feel happy and excited.”

Things might seem perfect at the moment for Michelle, but there is something that worries her and her parents.

According to her mother, all the attention and encouragement in the world, welcome as they are, cannot ensure that Michelle’s books reach the hands of those they are written for the thousands of children Michelle wants to inspire and give courage to face their fears.

“During a radio interview on Alex FM [which broadcasts in Johannesburg’s Alexandra township] many calls came from children who wanted to have her book but couldn’t afford it,” Mrs Nkamankeng said.

“This touched her a great deal and she asked us to look for sponsors who can buy her book to support free distribution of her books to the libraries of underprivileged schools and communities, especially in Gauteng. So now we have started an initiative secure all the financial support and other kinds of support we can get,” she said.

“We appeal to all good Samaritans out there who might want to work with us and help us make this dream a reality, especially our own Catholic laity, organisations and businesses. Michelle is a gift not only for us as the family, but she is gift to the Church as whole, as a family of God,” she said.

Michelle had special words of inspiration for Southern Cross readers: “Do not be afraid to go for your dream. Do not give up on your talent even if you make many mistakes or face obstacles. You can make a difference in your community and family no matter how small you may be. No matter what you do, always pray to God for support and strength.”

Michelle’s book, with illustrations by Megan Venter, is available online anywhere in the world. Hard copy or eBook versions of the book can be ordered/downloaded on Createspace’s website (www.createspace.com/6743192).

Hard copies will be available in South African bookstores in February 2017. Personal author-signed hard copies can be ordered directly from the publisher via Michelle’s Facebook page (facebook.com/michellenkamankeng).